Imagine going from New York City to Washington, D.C. in one hour — not by plane, but by maglev.

By comparison, today the same trip from the LaGuardia to DC’s Reagan airport takes about 90 minutes by air (not counting getting to and from the airports) and costs $276 one way. On Amtrak’s Acela, the fastest run, downtown to downtown, is three hours and costs $157. Or you could take the bus for $30, assuming you have 4½ hours to waste.

A maglev is a train, of sorts, that floats on a cushion of air, suspended and propelled along a special track quite different from conventional railroads. The technology has been around for over a hundred years but there are few maglevs in operation so far.

One of the best known is in Shanghai. I’ve ridden it and was not impressed. The ride was short, about 8 minutes over 17 miles, and only about 220 mph — no faster than China’s high speed conventional trains.

But the country that’s closest to opening a long distance commercial maglev is Japan, where the private (and, pre-COVID, very profitable) JR Central Railroad is building a maglev line for 177 miles from Tokyo to Nagoya, the Chuo Shinkansen. That maglev will fly along the track up to 314 mph.

And it’s that Japanese technology that will be used by Northeast Maglev, the private American company developing the U.S. system.

Like the Japanese system it will include a superconducting suspension and propulsion system, SCMaglev. At those speeds it is certainly possible for the ‘trains’ to make the 230 mile journey in an hour, even with intermediate stops.

Planning by Northeast Maglev is already underway for the first part of the project, connecting Washington, D.C. to Baltimore with 70% of the route underground, avoiding disruption above ground in the dense corridor. 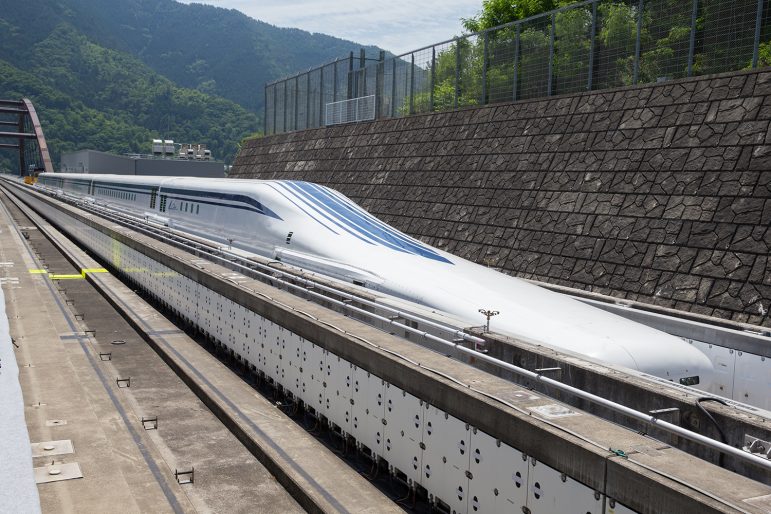 The Washington terminal would be near the downtown Convention Center and the Baltimore station either near Camden Yards (downtown) or in the outskirts where interstates 95 and 695 connect.

Trains would offer service every 15 minutes, including an underground stop at BWI Airport, just south of the city. The fares, they say, would be competitive to Amtrak. That’s got to hurt Acela ridership.

Assuming the operation is successful, the line could continue north to Philadelphia, New York and maybe even Boston by way of Connecticut, though the routing through our state is anyone’s guess at this point.

With up to 50% of the $10 billion initial cost being covered by the government of Japan, Northeast Maglev’s biggest hurdle now is getting necessary approval of the 30 different state and Federal agencies with jurisdiction. The environmental impact studies alone are into their fifth year.

Not to be outdone, Elon Musk’s Hyperloop is seeking permission to construct its first tunnel, a 10-mile section, eventually connecting D.C. to Baltimore. But unlike the Japanese maglev, Hyperloop’s “maglev in a vacuum tube” is far from a proven technology.

The implications of a maglev (or Hyperloop) running at these kinds of speeds are astounding. Shortening the travel time is like bringing the cities that are served closer together.

You could live in New York and commute daily to a job in Washington, D.C. faster than you can get from Fairfield to Grand Central Terminal.

If post-pandemic demand for travel returns, Northeast Maglev could be a game changer when it comes to inter-city travel.