Darien TV79 has launched an online survey asking town residents to find out what they watch — and would like to watch — on the town’s government television station. 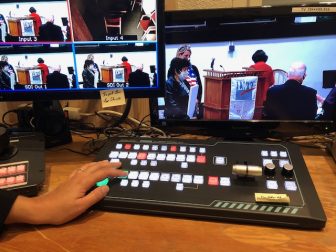 Take the two-minute survey and you, too can help control what Darien TV79 broadcasts.

— an announcement from Darien TV79

Since 2007 Darien TV79 has offered live, taped-replay and on-demand access to all board, committee and RTM government meetings in town.

In addition it carries programs of community interest, including town-wide events like the Memorial Day Parade.

But in recent months new technology grants from the Darien Foundation have allowed the station to air dozens of different programs each day on its Altice cable Channel 79, along with locally produced shows about community non-profits, public service announcements and public affairs items.

“We’re curious about which of these new offerings is capturing viewers’ attentions,” says Jim Cameron, Program Director of the station. “We’re also interested to hear what other kinds of local programming Darien residents would like to see.”

The online survey, which takes two minutes to complete, can be found here.

To follow updates on Darien TV79 program offerings you can subscribe to the free weekly email Program Guide by sending your email address to DarienTV79@gmail.com or check out this FAQ about the station.