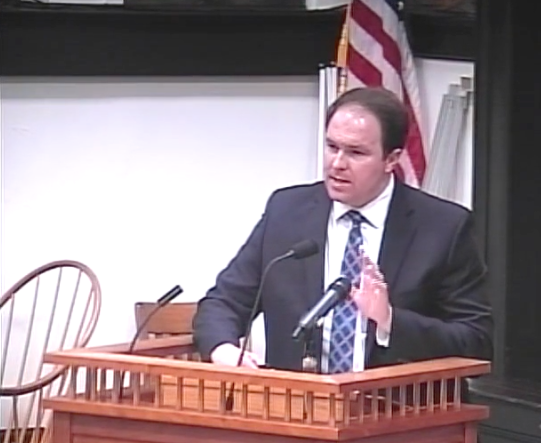 Heroin and opioid painkillers are so powerfully addictive that no method of ending the addiction is 100 percent effective, although treatment specialists have ways of increasing the odds of success.

According to Dr. John Douglas, clinical director of the Outpatient Addiction Program at Silver Hill Hospital in New Canaan, drug therapy doesn’t always work, and counseling by itself doesn’t always work — but taken together, the success rate is pretty high.

Heroin and other opioids “are some of the most addictive drugs in the world,” Douglas said at the Nov. 5 panel discussion“Straight Talk-Lifting the Veil: Facing the Hidden Drug Epidemic in Darien” held at Town Hall.

“That term, ‘addiction’ is, I think slippery for people. It gets thrown around a lot. […] [It’s] a loss of control over using the substance to the point where you are willing to endure personal consequences like relationship problems, getting fired from work, problems at school — the bad things that happen to you because you’re using don’t matter, and you’re still using.

“These drugs are particularly dangerous due to the risk of overdose and death. […] This is rather shocking, but drug overdose in this country is now the leading cause of injury death and causes more deaths than motor vehicle accidents, and most of these deaths are due to pain pills and heroin.”

Physical dependence “develops within four to seven days of taking an opioid,” Douglas continued. “That means your body has adjusted to the opioid being in your system, where it’s now dependent on that opioid. If you do not continue taking that opioid, you will go through withdrawal symptoms. The withdrawal symptoms are usually not fatal, but they’re incredibly uncomfortable.”

The symptoms include nausea, vomiting, the eyes tearing up and sweating, a lot of abdominal pain, muscle pain and bone pain. Addicts who try to withdraw by themselves often go back to using an opioid — not so much for the pleasure of the high, but to avoid the pain.

Douglas said addicts will often be hospitalized for opioid withdrawal “even though it’s not life threatening, [but] just because they cannot stop [taking more opioids] with these active withdrawal symptoms.”

This article, the fourth in a series “Heroin in Darien” based on the “Straight Talk-Lifting the Veil: Facing the Hidden Drug Epidemic in Darien” panel discussion, looks at how powerful an opioid addiction is and how to treat it. A future article, the last, will discuss where you can find more information. These articles have been published:

Previous articles in the series:

Heroin users will also develop “tolerance” for the drug — they need more of it to stay satisfied and get pleasure or avoid pain. When they try to go off of it themselves and then go back to it (“relapse”), they go back at the same level — which has become toxic for them after a short time, sometimes just weeks. That’s when and why they overdose, he said. An opioid, he said, “is incredibly unforgiving.”

Addicts frequently try to get away from heroin and other opioids, Douglas said. “Many people addicted to opioids don’t like it. They’re not happy about it. They know it’s destroying their lives, and there’s a lot of self-loathing, and a lot of people try to stop using opioids, but the drug is incredibly addictive.”

When an overdose takes place, he said, the addict becomes disoriented or unconscious, their rate of breathing is decreased, their pupils constrict, the lips and fingernails can be blue, they can make a choking or gurgling sound (“it’s a very common symptom; it’s actually called ‘the death rattle'”), their body is limp, their face is pale or clammy.

“A person can overdose and not die, but you’re in a state in which you really could die,” Douglas said.

First aid for overdoses with naloxone

An overdose can be dramatically turned around, temporarily, with naloxone, delivered either with an injection or through a nasal spray. Narcan and Evzia are two brand names of naloxone, Douglas said.

“This is not a cure,” he said. “This is a temporary reversal, and it can go away after about 30 minutes. They can go back into withdrawal.” So, “as soon as this is administered, you have to call 911.”

Darien EMS-Post 53 and Darien police are trained in administering naloxone. Darien police just recently announced that their training had finished and all patrol cars will have the drug for overdoses.

“If you have a loved one who you know uses opioids, I would recommend keeping this in your home,” Douglas said. You can get a prescription for it.

There are two main ways of treating drug addictions, Douglas said: behavioral therapy (counseling, either within a group or individually) and using “maintenance medications.”

Medications such as methadone, buprenorphine (including one type of it — suboxone), naltrexone (sold under one brand name, “Vivitrol”) and naltrexone can counteract withdrawal symptoms without giving the patient the euphoria of an opioid high. For naltrexone, however, the patient has to wait seven to 10 days, and “most people who are addicted to heroin are not able to go that long without abusing the drug as an outpatient,” he said.

How long should someone be on a maintenance medication? Douglas says: “As long as it is helpful. […] I recommend people take it for at least one year [because] so many people relapse who stop this.” Ninety percent of people who stop medication relapse, he said.

“It takes an incredible amount of energy to overcome this addiction, and I would say  you want to stay in treatment […] and continue it until the person no longer has cravings, has made significant lifestyle changes […] that are consistent with being sober, and they have adequate social support where they have at least one person in their life who can spot the warning signs of relapse. And then you can confidently say ‘This person is stable in recovery.'”

See the full video of the panel discussion on Darien TV79 (Douglas begins speaking at the 24:28 minute mark, you can skip to that spot using the bottom bar of the video screen):

One thought on “Heroin in Darien 4: Heroin’s Powerful Addictiveness & How To Break Loose”