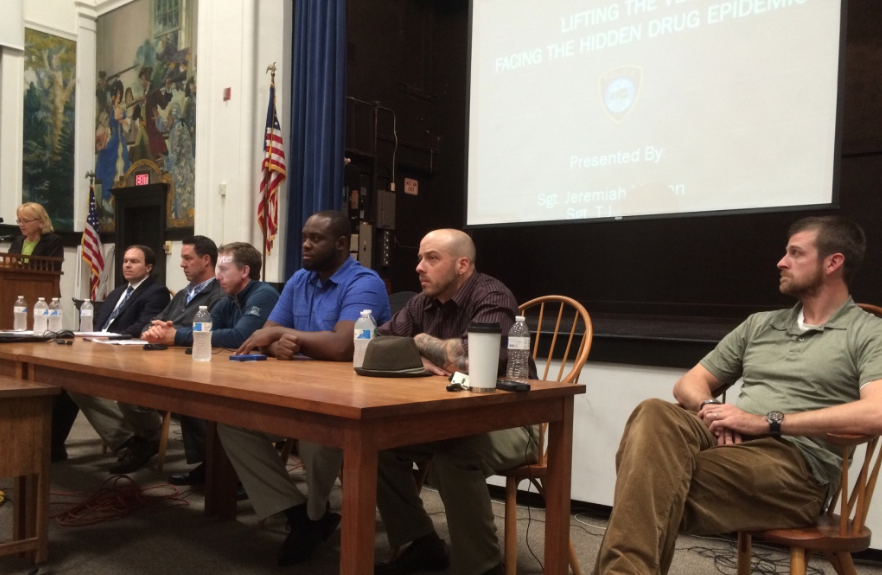 With cheap heroin becoming easily available in and near Darien, you can do a number of things to make it less likely that your child will become addicted to it or prescription opioid drugs similar to it, according to experts at a recent panel discussion in Darien.

Advice from members of the panel discussion, “Straight Talk-Lifting the Veil: Facing the Hidden Drug Epidemic in Darien” (which Darienite.com is combining with previously reported advice from Police Chief Duane Lovello) at seemed to fall into three categories:

Parents should also recognize that athletes at school also have an incentive to abuse pain medications to keep playing a sport after an injury.

This article, the second in a series “Heroin in Darien” based on the “Straight Talk-Lifting the Veil: Facing the Hidden Drug Epidemic in Darien” panel discussion on Nov. 5, looks at what parents, potential addicts and others can do to prevent addiction or begin to deal with it. The first part looked at what police are confronted with in dealing with heroin and prescription painkiller abuse in Darien. Future articles this week will present information on how addiction starts, how addiction is treated and what it’s like to become addicted and to overcome it.

Dr. John Douglas, clinical director of the outpatient addiction program at Silver Hill Hospital in New Canaan, said there are physical and behavioral signs that your child may have an addiction, including:

A drug user often tries to stop taking narcotics (and frequently fails), and there are signs for that, too, Douglas said. The withdrawal symptoms include:

If someone’s already going through withdrawal symptoms, then they’re already addicted, and they need serious treatment. “This is much, much more severe than marijuana or alcohol,” Robert DiRoma Jr., a drug and mental health counselor in Darien, said of opiate addiction.

Here’s a video of the panel discussion from Darien TV79:

For children who avoid these drugs in adolescence, there’s a much better chance that as adults they won’t become addicts, said Nick deSpoelberch, an addiction and mental health counselor himself in recovery from a heroin addiction.

“Eighty-three percent of people who develop a serious addiction in their life begin serious use in adolescence,” he said. “So, in my opinion […] as a parent if you can get your kid through this time period [adolescence] without abusing substances, you greatly decrease their chances.”

Here’s the experts’ advice on how to help your child avoid opioid addiction:

(1) Keeping the pills away

There are legitimate, good uses for opioid prescription medications like oxycodone, hydrocodone and Fentanyl, Douglas said, but “they should be used on a short-term basis. These are not chronic medications. It’s not shown to be helpful on a long-term basis.”

So if you or your children are prescribed a pain medication after surgery or for some temporary medical condition, Douglas suggests you ask your doctor, “How long should I take this? [Or how long should your child take it.] Is there any risk if I take this over a week?”

In a bit less than a week, abusing opioids gives the abuser a physical dependence on them, meaning that stopping their use can cause discomfort, often severe discomfort, so preventing an addiction from forming in the first place is a much easier task than trying to break one.

“We urge you to look through your cabinets and see what’s in there, and be mindful of how many pills you actually have if you have someone who’s going along this road,” Darien Police Sgt. TJ White said.

More advice on separating these pills from your children:

All this will help somewhat, but your kids can still get pills from elsewhere. Be more alert to the signs of opiate abuse around the time when your teenager is studying for midterms or finals, Darien Police Sgt. Jeremiah Marron suggests.

“We do notice during finals, midterms, that there is a spike in medication, transactions, illicit narcotics use,” Marron said. “We hear that kids go to study at the library […] and the librarys been dubbed ‘The Candy Shop.’ […] a trading ground for prescription ‘study drugs,’ as they call them.”

Kids who are particularly anguished about problems in life and athletes who are injured are more especially at risk to abuse opioid drugs, but Roody Joseph, DiRoma’s partner at the Counseling Center for Discovery & Change in Darien, said there’s risk for any kid who has a friend or friends who are abusing drugs.

Opioid drugs are so widely available that kids may well encounter them, Joseph said. When he played sports in college, it was easy to get the opioid drug Percocet, and he found a player in a locker next to his snorting cocaine. “So it’s out there, it’s in our home — and that’s the scariest part,” he said. 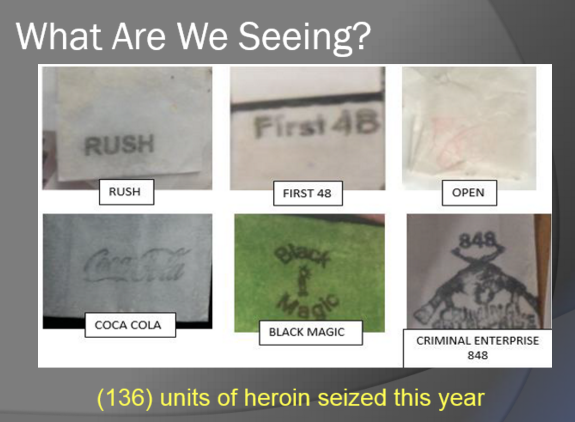 Heroin in powder form is often sold in folded wax paper with stamps like these. These examples were seized by police in the area. (from Police Sgt. TJ Whyte’s presentation)

He added, “Another risk factor is if they don’t feel well-connected to their school, where they’re not doing well in school, that also places them at risk of using substances.”

It’s important that your children know they can talk to you about drug use, said Robert DiRoma Jr., Joseph’s partner at the Counseling Center for Discovery & Change. He suggests you repeatedly let them know that you’re “emotionally available” to them — that is, available to talk to them about it (and if you do, that you won’t blow up in anger or fear or otherwise make the conversation uncomfortable).

He added later: “Even if they don’t want to talk to you at first, just by you telling them on a consistent basis, not even every day, just telling them, ‘Hey, is everything OK? How are you doing? I’m here if you need to talk about anything,’ eventually they will come because eventually they’re going to say, ‘Oh, mom really means that. Dad really means that. They tell me that all the time.'” 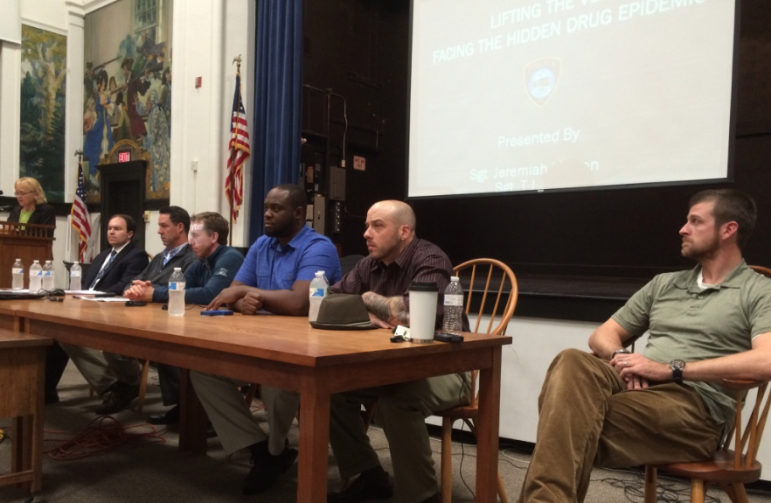 Joseph said: “A lot of times it’s just being able to make that connection. Be able to come in and see what’s really on their minds, what’s bothering them.”

While being “emotionally available” for your child, make it clear that your expectation is that your child not use illegal drugs or alcohol, Douglas said. 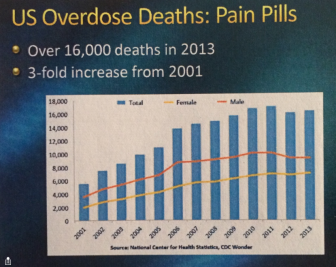 “I would say one of the strongest protective factors that I would emphasize for everyone is to tell your kids and set the expectation to not use alcohol or drugs during childhood or adolescence, and it’s been shown that for every year someone delays the initiation of alcohol or drug use, you decrease the chances of developing addiction by 5 percent.

“That message of ‘Don’t use alcohol or drugs’ is sometimes lost in our culture […],” he said. “But if you set the expectation, you will dramatically improve your child’s chances of not becoming addicted.”

Joseph adds, “Go with your gut feelings. […] If you see your child’s acting out of character, take an active role, jump in, talk to him. […] Take an active role and leadership in their lives.”

“If in doubt, do a drug test, because with the chemicals we’re talking about, four or five days can be too late,” deSpoelberch said. You can get drug test kits at local pharmacies, “and they’re instant. Your children or adolescent or adult can literally go to the bathroom and, in a couple of minutes, you’ll know.” 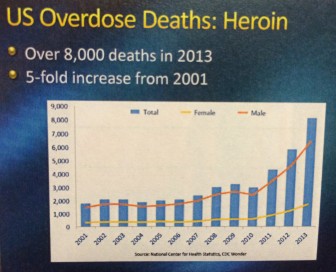 Deaths from heroin overdoses, while less than those from pain pills, have increased five fold from 2001 to 2013, Douglas said. (image from his slide presentation)

At a recent meeting of the Darien Police Commission, Police Chief Duane Lovello had this advice for any parent, particularly if the parent has doubts about whether or not his or her child is taking drugs:

“It’s responsible parenting, especially when you’re up against a problem that your child might not be able to deal with on their own. They need all the help they can get. If that means you’ve got to snoop a little bit, I’m all for that.”

Correction: Some statements mistakenly attributed to Robert DiRoma were made by Nick deSpoelberch.

6 thoughts on “Heroin in Darien 2: Signs of Addiction in Your Kid & How to Reduce the Risk”