Another truck has hit a the railroad overpass at the Post Road, something that happens at least several times a year for a very long time downtown. No injuries were reported. 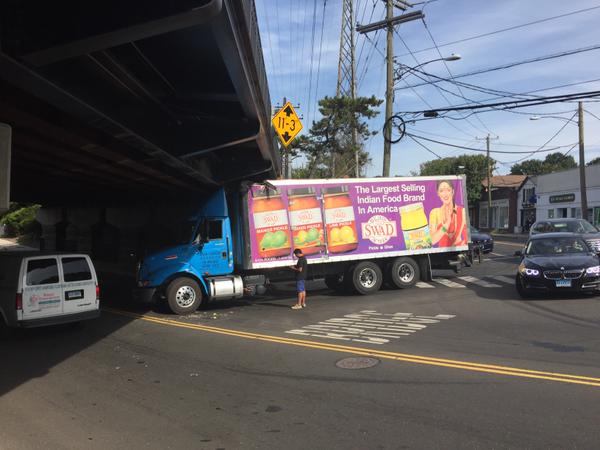 Photo from the Darien Police Department account on Twitter, posted at 3:13 p.m. (although it’s listed as being posted at 12:13 p.m.)

In a tweet posted at 3:13 p.m., Darien police were suggesting that drivers downtown seek alternate routes (Leroy Avenue seems to be the only nearby alternative).

The most recent truck accident at the low bridge was on July 17. Damage done by the collisions hardly affects the bridge at all, but the tops of trucks are usually damaged severely, police have said.

As Darienite.com previously reported, Darien Police Captain Don Anderson has said the Connecticut Department of Transportation has plans to install a truck-height detection system that would set off flashing lights near the bridge when any truck at too great a height approaches it.