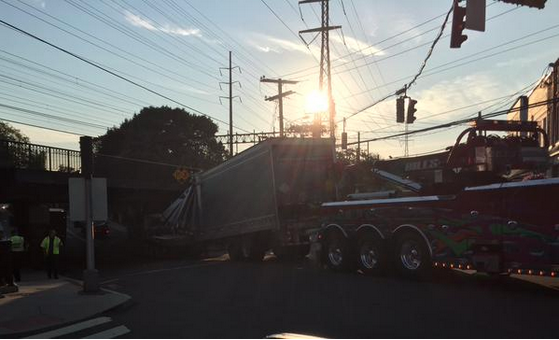 This truck continued to block traffic at the Post Road underpass downtown as of 7 a.m. on Friday, July 17 (picture from Darien Police Dept. Facebook page).

The truck that got wedged under the railroad bridge in downtown Darien on July 17 didn’t even slow down for the bridge, according to Darien Police Chief Duane Lovello.

“He had a full head of steam going into the bridge,” Lovello said at a recent Darien Police Commission meeting. “This guy never saw the bridge.”

The collision was only the latest in a long line of similar incidents in which trucks have hit the bridge.

The truck wasn’t removed from under the bridge until after 7 a.m., meaning early commuting traffic was further slowed down that day, a Friday.

This truck continued to block traffic at the Post Road underpass downtown as of 7 a.m. on Friday, July 17 (picture from Darien Police Dept. Facebook page).

Lovello said the driver was in overnight traffic that has been heavy on the Post Road in Darien. Drivers often clog the Post Road to escape delays caused by overnight roadwork on Interstate 95 in and around town, he said. At 3 a.m., traffic can be bumper to bumper on Route 1, “like it’s 5:00 in the afternoon,” he said.

“Every time I-95 does overnight work, there’s an uptick” in incidents of trucks hitting the low railroad bridge, Lovello said.

An I-95 paving project in Darien and Norwalk will continue during overnight hours through November, the Connecticut Department of Transportation has announced.

Damage done by the collisions hardly affects the bridge at all, Darien Police Captain Don Anderson told the commissioners. “That thing is built to withstand the end of the earth.”

The trucks, on the other hand, get damaged severely, he said.

Anderson had hoped to get some reflective material on the bridge to alert truck drivers, and the Department of Transportation approved of the idea, but Metro-North officials who own and control the bridge have refused, he said. “They won’t agree to anything attached to the bridge,” he said.

Plans for a Safety Device

The Transportation Department has plans to install a truck-height detection system that would set off flashing lights near the bridge when any truck at too great a height approaches it, Anderson said.

Overhead detection systems on poles at both sides of a road have laser beams that are disrupted if a truck passes by at a certain height. The disruption activates the warning signal, which can be flashing lights closer to the bridge.

(There’s a height-detection device in operation near the Merritt Parkway overpass on Old Stamford Road in New Canaan (Route 106), where Hoyt Street passes into that town.)

The state plans to install the devices in downtown Darien sometime in 2016, Anderson said.