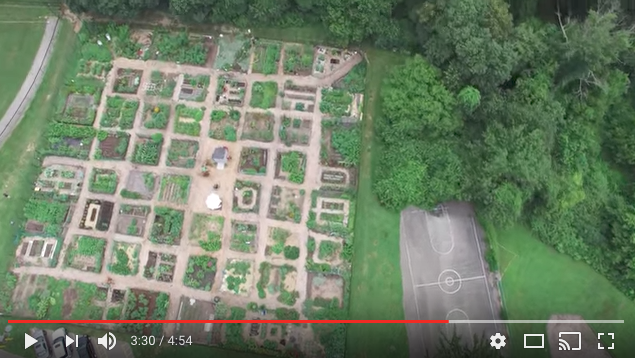 Community garden at Cherry Lawn Park, as seen from a drone.

Here’s the low-down on what’s up around town:

Youtube user AnthnySlzr7 has some interesting aerial videos of Cherry Lawn Park and Ziegler’s Cove (and surrounding areas) using a drone. Here’s a picture of the community garden at the park (we doubt you’ve ever seen it this way before, even if you’ve seen it), and two of the videos:

Community garden at Cherry Lawn Park, as seen from a drone.

Shortly after opening earlier this year, the Mather Homestead house museum on Stephen Mather Road is losing its executive director, Anna Kirklin Denoyer, who is moving to the Midwest. She’s being replaced with Lauren Senkbeil Swenson, who has begun scheduling tours, according to an announcement on the homestead’s Facebook timeline. 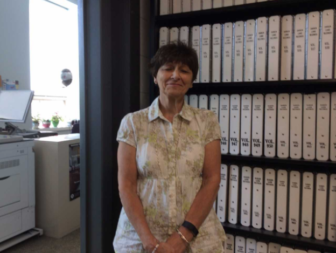 If you’ve ever noticed the many thriving flowers and plants in the Town Clerk’s Office, Assistant Town Clerk Diana Zakhar was the one to thank.

Zakhar, working in the office for 17 years, retired last Thursday. She’ll be taking care of her grandkids and taking some classes at the Norwalk Senior Center.

Before the clerk’s office, she was a phone company employee for 32 years, and worked for a time in Norwalk Public Schools. She got her green thumb from her Italian-American family, she said — Italians often love to garden.

Darien teenager Matt Guttuso was featured earlier this week in an article in the Boulder Daily Camera in Colorado. He was there at a week-long workshop for high school cross-country runners:

“Being a member of his high school track and cross country teams gives Guttuso a sense of belonging. He put in enough hard work to run a solid 5 minute, 15 second mile as a freshman; when he started running, he struggled to break 10 minutes.

“More importantly, running has given him a new identity, a chance to put stereotypes behind him.

“‘Labels are for jars,’ Guttuso said, in one of several insights proffered during his visit. ‘I felt babied. Adults would tell me, “Oh, good job,”‘ in a patronizing way, the praise coming because he is autistic. ‘I want to earn it.'”

Darien native and New Canaan First Selectman Rob Mallozzi came up 10 votes short at that town’s Republican caucus on Tuesday night, losing 612-602 to Kevin Moynihan to get the caucus’s endorsement as the GOP nominee. Mallozzi has decided not to contest the decision with a primary.

The students participating in the Darien Summer Jazz Workshop performed for the residents of the Atria Senior Living facility on Thursday, July 13.

The students, ranging in age from grade 4 through grade 11, engaged in a week long study of creative jazz and improvisation techniques and then shared their music with several resident s at the Atria.

Students in the Summer Jazz Program

Richard Sadlon, the director of the Summer Jazz Program remarked, “Our students get an authentic jazz performance experience by performing in public, and the residents at the Atria provide an appreciative, supportive audience. Everyone benefits.”

The students performing in the 2017 Darien Summer Jazz Workshop are:

Seven community members have been named “directors emeriti” by the Person-to-Person Board — Attorney Wilder Gleason,  Judy Kilmartin and Jan Smith, all of Darien;  Judy Nemec of Greenwich; William Taggart of New Canaan; along with Patricia Phillips and Rebecca Wilson, both of Stamford. 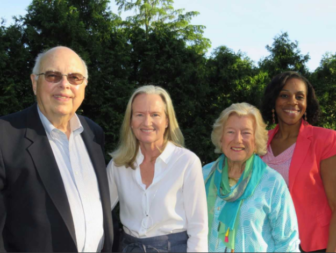 Jan Smith is a former member of OPUS for Person-to-Person, from its founding days. She is also a former secretary, vice president and president of the P2P Board. During her presidency, Smith oversaw the decision to renovate the Darien site and led the capital campaign to fund the renovation. Smith chaired the Scholarship Committee for several years, hosting the annual reception to honor graduating P2P Scholars at her home. She is still active on the Programs Committee and is the head of a scholarship candidates interview team. 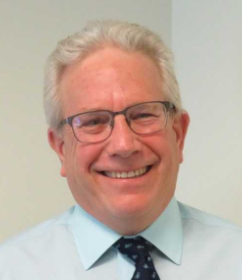 Wilder Gleason has been involved with Person-to-Person as a volunteer since his daughter helped start the Youth Group almost 20 years ago. In 2008, Gleason joined the P2P Board and hit the ground running, working on the Finance Committee, serving as chair of the Emergency Assistance Committee and leading the Building Committee for renovation of the Darien facility before moving into the position of board President.

Under his board leadership P2P successfully completed a merger with CCA in Norwalk. 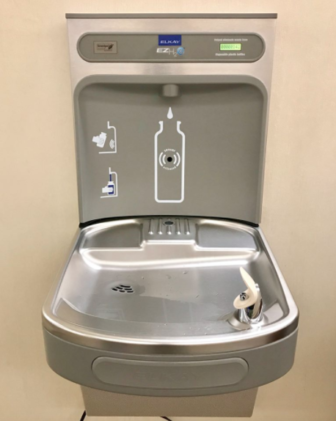 Photo and caption from the Darien Recycling Center on Facebook

Have you seen this new water fountain at Darien Town Hall? It’s got a sensor-activated bottle filler as well as a ticker that counts the number of plastic water bottles eliminated by refilling your own!”

Given his love of and commitment to the agency, Gleason decided to stay on after stepping down as president, serving as a contributing member of the Development Committee before heading up the committee implementing plans to deliver P2P programs and services to more people in the Stamford community.

Judy Kilmartin worked with Person-to-Person for more than 26 years, sitting as an ex officio Board member through most of that time until her retirement in 2010. Beginning as the volunteer coordinator, Kilmartin rose to the position of director of volunteers and assistant director.

She currently serves as an unofficial advisor to both the Director of Volunteers and the executive director, as well as a goodwill ambassador for P2P in the community. Kilmartin continues to volunteer on fundraising committees and in the Darien Food Pantry. 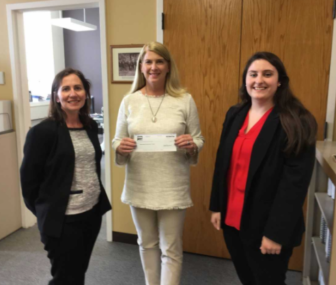 From left, Jacqueline Lazowski, underwriting manager for CIRMA, presents First Selectman Jayme Stevenson with the check. (Darien officials didn’t have the name of the CIRMA official on the right.)

“This year’s members’ equity distribution was the result of excellent operational performance, financial strength, and of the success of our members’ risk management efforts,” said David Demchak, President and CEO, CIRMA.

The 2017 distribution is the sixth and largest distribution made in the seven years of the program. CIRMA began its Members’ Equity Distribution Program in 2011, and has distributed a total of $19.7 million to its member municipalities, public schools, and local public agencies.

David Erlich, senior film critic for Indiewire, tweets “I can’t stress this enough: You must see Dunkirk in IMAX 70mm. wait however long you need to wait, travel however far you need to travel.”

Sam Adams of Slate tweets in a suspiciously similar way, but with casualties on his mind: “You absolutely must see Dunkirk in 70mm IMAX. Do whatever you need to do, kill whoever you need to kill.”

You don’t need to raise Darien’s murder rate up from zero — the Maritime Aquarium’s IMAX theater in Norwalk is showing the movie in all its big-screen glory. Don’t get left on the beach this summer — get transported! 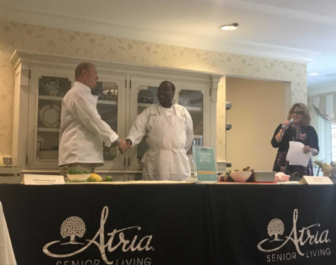 Atria Darien’s corn recipe cookoff competition, in which the senior living community company challenged Mark Rosenbloom, board president of the Darien Chamber of Commerce, to compete with a recipe that included corn, resulted in a tie between Rosenbloom and Atria Darien Chef Carrington Parker.

“Both chefs prepared a corn relish,” Atria Darien Director Beth Blake said in an email after Darienite.com asked about the results from the event last Thursday.

Did you know Runner’s Roost is running a free running group? They organize group runs through town. You can sign up through Facebook.

If you get a home energy assessment (audit) from Energize Connecticut, you’ll get more than $1,000 in products and services, not to mention saving an average of $200/year on energy bills. 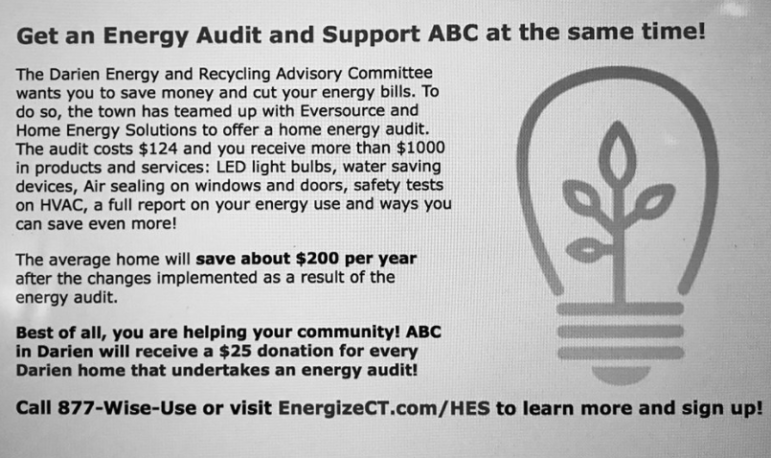 Support ABC in Darien when you get a home energy audit through Energize Connecticut — and save money, too.

Getting an Energize Connecticut assessment also benefits A Better Chance in Darien. For every audit done in Darien, a $25 donation will be made to ABC in Darien. For more info on audits and how to schedule one, click here.

The Darien YMCA Special Needs program “is seeking volunteers for to assist with our programs this upcoming fall,” according to the YMCA newsletter. “Many of the programs and events at the Y would not be possible without the support from volunteers. Click here for a list of programs details. 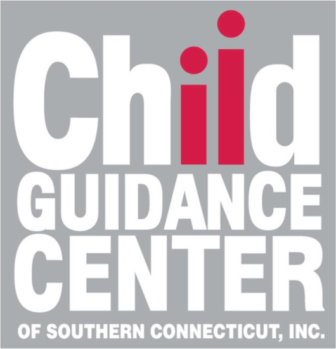 The YES Mentoring Program supports children, ages six to 18, who are involved in System of Care in Stamford and Norwalk. CGC’s System of Care program helps families access integrated services to meet complex needs and safely maintain children at home.

Through YES youth will have the opportunity to interact and participate in fun, age-appropriate activities with a positive role model. While the mentor is spending quality time with the child/teen, parents will have some time to themselves.

Each YES session lasts 12 weeks, and kids will meet with their mentors for three hours a week. Every mentor will complete a thorough interview, orientation, and background checks. The mentor and family will work together to develop a convenient schedule of enjoyable activities for the child.