Since 1971, you’ve been able to travel by train to Florida with your car, avoiding the mayhem of Interstate 95. And although the service is now run by Amtrak, it actually started as a private enterprise.

How It Got Started

Trains carrying passengers and their cars have been used in Europe for decades, but in the early 1970s, the U.S. Department of Transportation conducted a study of long distance rail travel to avoid the problems of the oil crisis.

In 1971, Eugene Garfield took the idea and started the Auto-Train Corporation, buying his own fleet of locomotives, Pullman sleepers, dome car-coaches and dining cars. 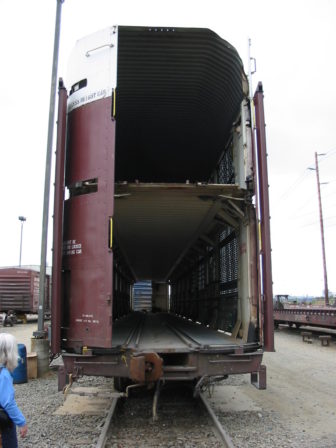 The open end of a two-level autorack undergoing repairs in Tacoma, Washington (2004)

Most important, he acquired 62 bilevel autorack cars. He set up shop in Lorton, Virginia, just south of Washington, and right off of I-95.

The train’s southern terminus was Sanford, Florida, near Orlando’s Disney World, which had opened months earlier.

The overnight run was a popular alternative to the two-day drive, and soon a complementary service for folks from the Midwest started running from Louisville, Kentucky.

That additional train didn’t draw the expected crowds and, combined with climbing crew costs and a few derailments, the private Auto-Train Corp. was in bankruptcy by April 1981.

After a couple of years with no service, Amtrak stepped in, acquiring the stations and some of the rolling stock.

Eventually the older “Heritage Fleet” passenger coaches and sleepers were replaced with double-deck Superliner cars and the old autoracks were updated to 80 enclosed car-carriers, each carrying 10 vehicles. There’s also a special area for motorcycles. 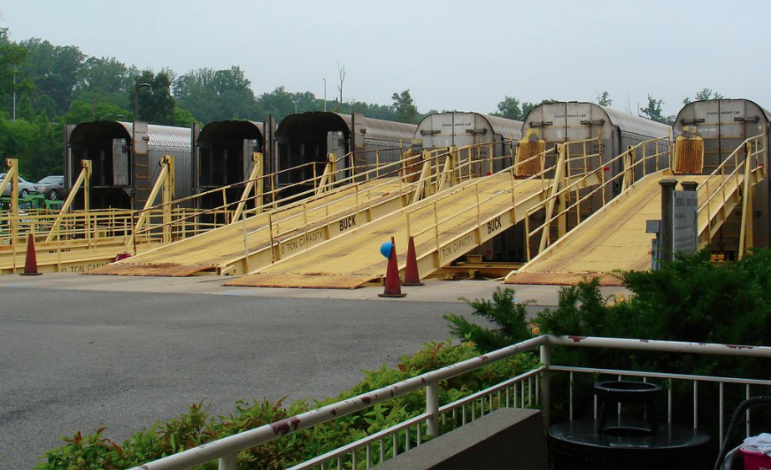 Auto Train autoracks lined up at their loading ramps. (2010 photo)

Passengers heading north or south must be at the departure station by 2 p.m. when the cars are loaded. Passengers board a half-hour later and the trains depart at 4 p.m. With 18 passenger cars and 33 car-carriers, the train is almost three-quarters of a mile long, making it the longest passenger train in the world.

At midnight, the northbound and southbound trains meet in Florence, South Carolina, for refueling and crew change before continuing on through the night.

The total 855-mile trip takes 17.5 hours, arriving the next morning at 8:30 a.m. Within a couple of hours, the last of the cars is unloaded and you’re on your way.

Pricing depends on the size of your car, how many passengers and the type of accommodation. 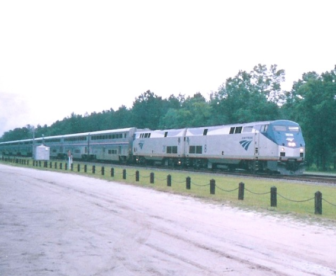 But looking at the Amtrak website about a month in advance, transport of the car would cost $258 (motorcycle $146) and anywhere from $89 to $280 per coach passenger.

Prices vary with demand and sleeping car space sells out fast, despite the high price, as many Auto Train loyalists can’t or won’t fly or have mobility issues.

Sleeping car passengers’ meals are included in their fares, while coach passengers can BYO or dine in the AmCafe. In January, much of the service will be “enhanced,” says the railroad.

In addition to autos, the train will soon accommodate SUVs, vans, small boats or Jet Skis. More sleepers will be added and a variety of food trucks will cater coach passengers needs before departure.

So if you’re a “snow bird,” consider the Auto Train. It sure beats driving on I-95.