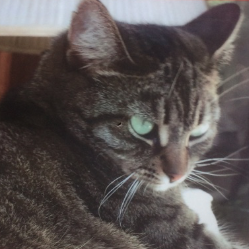 This green-eyed tabby cat, Booboo, has been lost on Woods End Road in Darien, and the owner is looking for it. 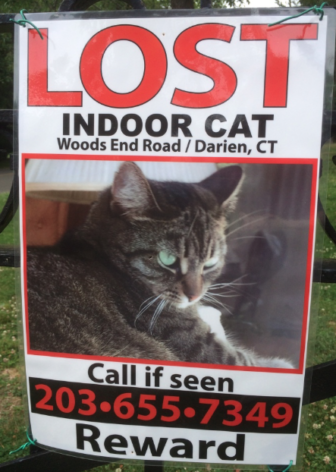 Booboo is a gray female with stripes and some white fur. Her owner lost her about five weeks ago and has been putting up posters in the neighborhood and distributing flyers.

Several neighbors have contacted her to tell her they’ve seen a gray cat (even one neighbor who trapped one), but in each case the cat was different. There’s a reward offered, and a phone number on the poster (pictured below).

The cat may have left the house when the owner was away but let another person inside. A cable television repairman visited the house later that day and was in and out while the owner was there. Booboo can get afraid of visitors, and originally the owner thought she was hiding somewhere in the house.

A humane trap was used for weeks, but it caught two raccoons and a possum, so the owner has been advised to only leave it out during the day.

Booboo was originally caught in a humane cat trap about 2 1/2 years ago as a kitten, about a few months old. The trap had been left out for another cat as winter approached, but that cat — perhaps Booboo’s mother — never showed up.

Many neighbors have been helpful, calling with reports of gray cats they’ve seen and several pictures have been sent to her, but in each case it was a different cat. One family had trapped a gray cat and told the owner to come and get her pet, but that was a different one, too.

A message about the lost cat was posted on NextDoor.com, a free website that allows neighbors to notify each other and which has hundreds of people signed up in the neighborhood surrounding Cherry Lawn Park, the owner said. She’s also reported the lost cat to Darien Animal Control Officer Chip Stahl.

The FedEx store next to Costco, just over the border in Norwalk, has been very helpful in designing the poster an getting it laminated, she said.

The “Lost Cats and Found Cats of Darien, CT” Facebook page recently posted this  a picture of the poster at Cherry Lawn Park (which is just south of Woods End Road, a short street off of Sylvan Road).

Booboo’s owner was distraught over the loss, but she said she’s been gratified by her neighbors’ response: “People take the time to call — it’s just amazing to me. That really lifted my spirits. They take the time.”