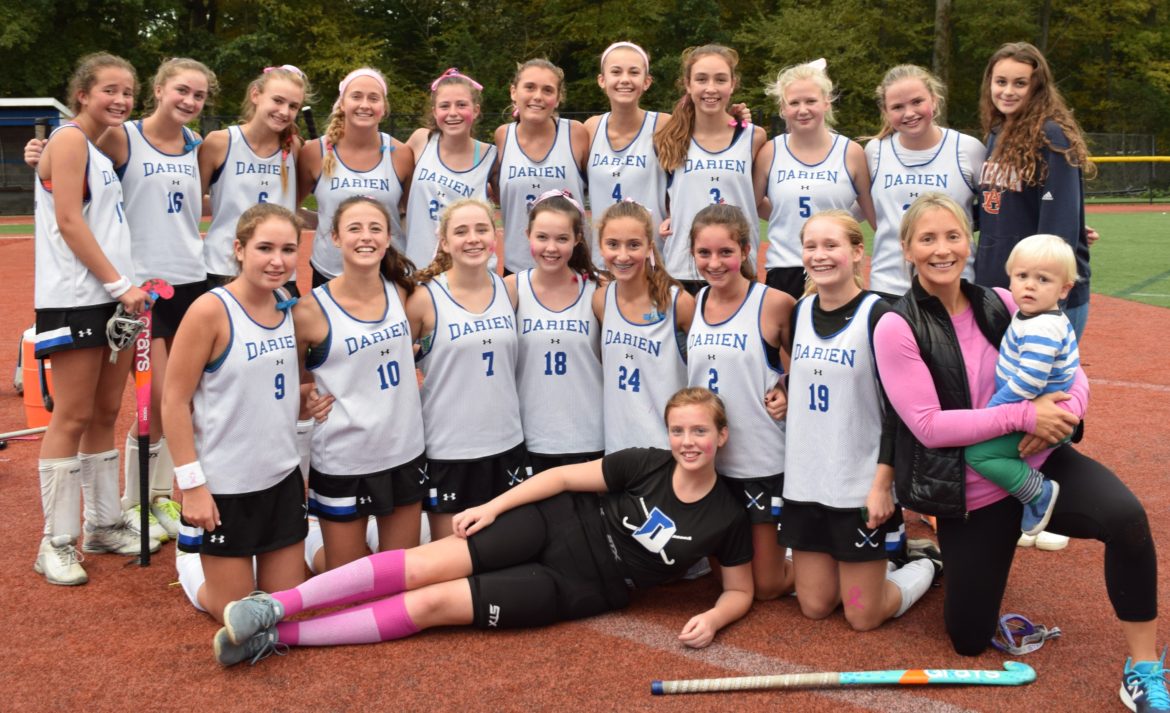 Darien High School's freshmen field hockey team wanted to honor the late Allison Haupt of Darien, who had breast cancer and passed away on Saturday, by playing in pink for their last official game Tuesday. They played against Greenwich Academy, winning a 1-0 game. Many of the players are friends with Claire Haupt, Allison's daughter.

Here’s the low-down on what’s up around town: 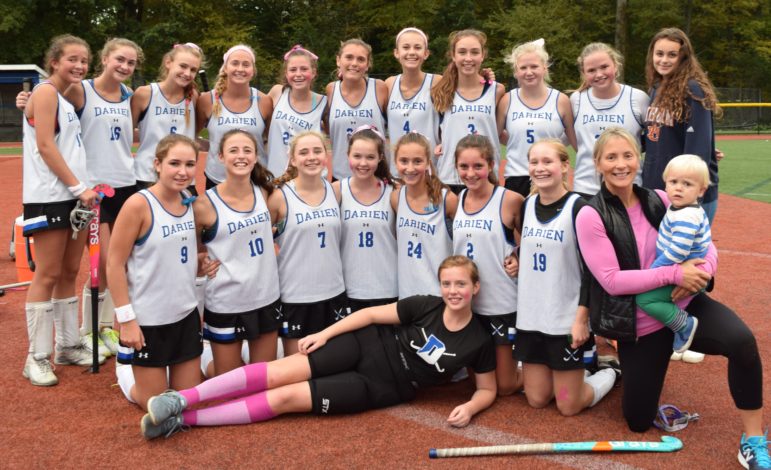 Darien High School’s freshmen field hockey team wanted to honor the late Allison Haupt of Darien, who had breast cancer and passed away on Saturday, by playing in pink for their last official game Tuesday. They played against Greenwich Academy, winning a 1-0 game. Many of the players are friends with Claire Haupt, Allison’s daughter.

New Canaan High School senior Will Hetherington jumped into action on Sept. 25, and rescued two young girls caught in a submerged vehicle during the heavy rain storm and flash flooding that took place that day throughout the area. 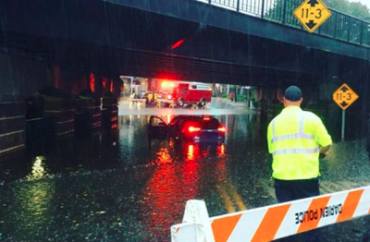 Flooding on Route 1 in Darien at the railroad underpass.

Hetherington, who’s been a volunteer fireman for the Darien Fire Department since he was 17, was on duty when, at approximately 4:30 p.m. that Tuesday, the DFD got a call for a car and water rescue. A Jeep Cherokee with three young girls, aged 6, 8 and 12, and their grandmother, was submerged under the Tokeneke Railroad Bridge in Darien, with flooding waters reaching half way up the car windows. Hetherington was on the rescue truck that was dispatched, and he volunteered to suit-up, donning a yellow waterproof rescue outfit, known as a “mustang suit.”

With DFD safety officer Andy Malowitz, Hetherington approached the trapped family’s vehicle. They decided not to break any windows but were able to pull the young girls from one of the slightly open car windows. Hetherington rescued two of the girls, putting each on his shoulders and carrying them to the firetruck, handing them off to Lorin Treglia, another DFD volunteer. 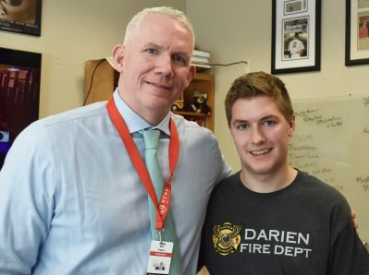 He and Malowitz returned to remove the grandmother, who had an injured foot, which restricted the rescue effort. They eventually were able to pry open the driver’s door and remove her from the vehicle, carrying her to the firetruck.

“The courage Will displayed during the rescue is without question,” said NCHS Principal Bill Egan. “We are proud of his actions on September 25th and happy to be able to share his story.” Hetherington is one of New Canaan High School’s Students of the Month for October 2018, a monthly program in which two students from each year at the high school are recognized with a hallway plaque. —Mike Horyczun 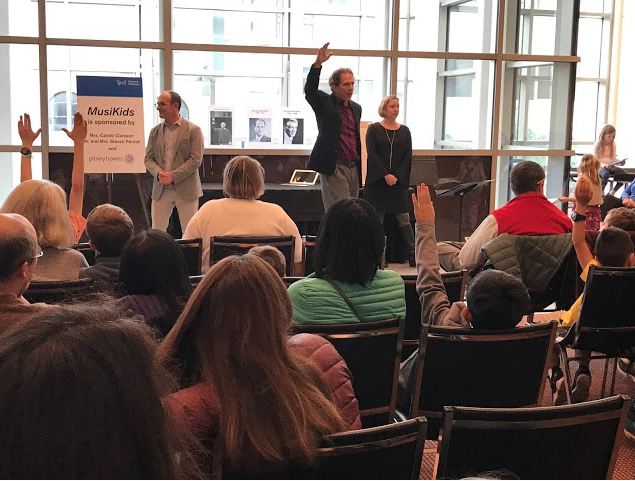 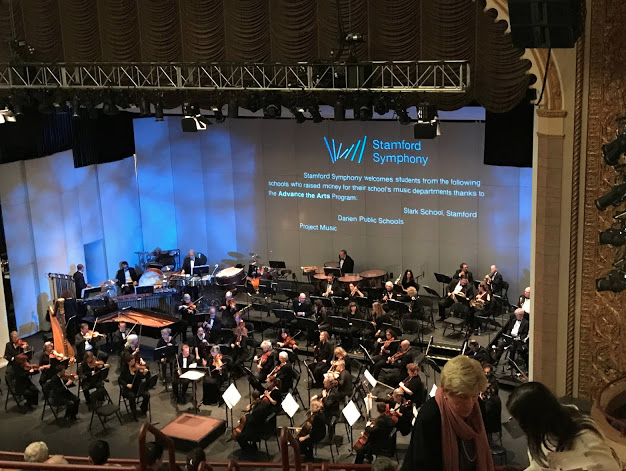 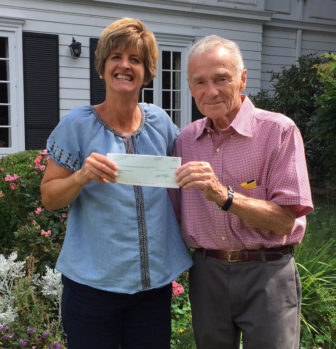 A check on behalf of the John and Ethel Kashulon Foundation was presented by President Martin P. McLaughlin Sr. to Amy Bell, executive director of the Darien Community Association.

A donation on behalf of the John and Ethel Kashulon Foundation recently was presented  the Darien Community Association.

The Kashulon Foundation mission is to improve people’s lives through the funding of programs whose mission and projects align with its three unified goals of enhancing educational, children’s and cultural opportunities.

The DCA is located at 274 Middlesex Road in Darien.

On Sept. 19, Bridget Ritchie, a junior at Darien High School, hosted a field trip to the Norwalk Aquarium for eighteen 3rd graders from Saint Joseph School in the Bronx.

Bridget used GoFundMe and social media to help raise the money needed to cover the cost of transportation from the Bronx and the admission to the Aquarium. 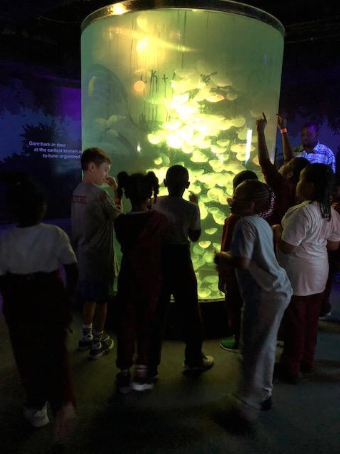 The children enjoyed the IMAX movie Backyard Wilderness, the seal training demonstration, shark and ray touch tank, journey with Jellies and lots of other fun exhibits. 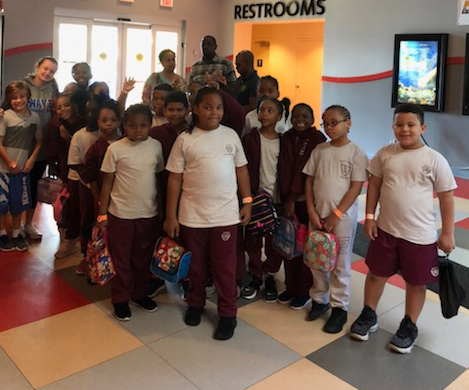 The highlight may have been the observation dome for the adorable meerkats. It was a fun filled, exciting day for the children of Saint Joseph School.

New Canaan town officials about to focus on improving amenities at Talmadge Hill Train Station, according to New Canaan First Selectman Kevin Moynihan. As it stands, the station has no canopy, coffee or warming places. 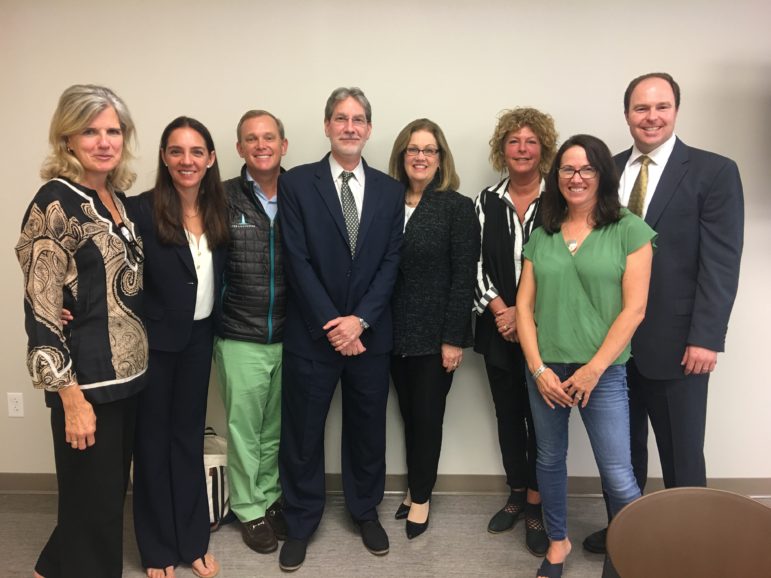 On Wednesday, Sept. 26, the Community Fund of Darien’s Human Services Planning Council held its first meeting of the year to discuss co-occurring disorders and addiction. The discussion focused on giving participants an understanding of the relationship between mental health and substance abuse, the prevalence of co-occurring disorders, and the treatment and recovery options available in our community. The Community Fund of Darien’s HSPC is comprised of representatives from the public schools, government, clergy and local nonprofits. The monthly meetings feature guest speakers and panelists who educate the members on relevant topics of interest. 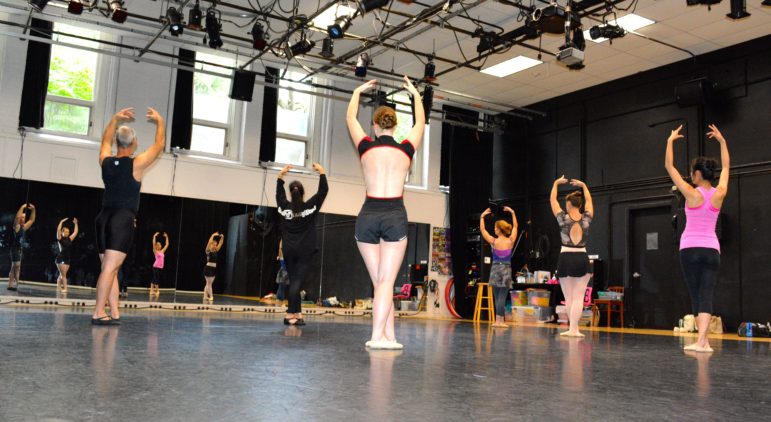 All levels of ability are welcome to adult ballet classes that take place at the Darien Arts Center on Mondays at 9:45 a.m., Wednesdays at 10 a.m. and Fridays at 10 a.m. The popular adult classes include a thorough barre, center floor, and a well-balanced combination in a relaxed and positive atmosphere. For more information or to register, visit darienarts.org, email DAC Dance Director Bonnie Gombos at bonnie@darienarts.org or call (203) 655-8683. The DAC is located at 2 Renshaw Road, behind the Darien Town Hall.

Former Darien Police Chief Duane Lovello started a new job earlier this year as director of Yale University Security Operations. (That’s a different agency from the Yale Police Department, which has its own police chief.) 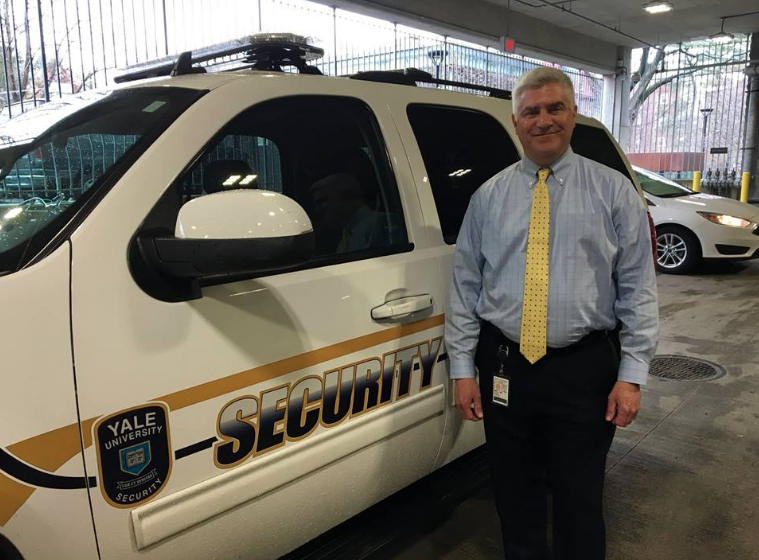 Between Darien and Yale, Lovello worked for a short time at the Connecticut Housing Finance Authority, where former Darien town administrator Karl Kilduff is executive director. At CHFA, Lovello managed over 40,000 properties statewide.

We’re late in publishing this, but we had to include it (just look at those kids!): Pictures from the Holmes School back-to-school picnic: 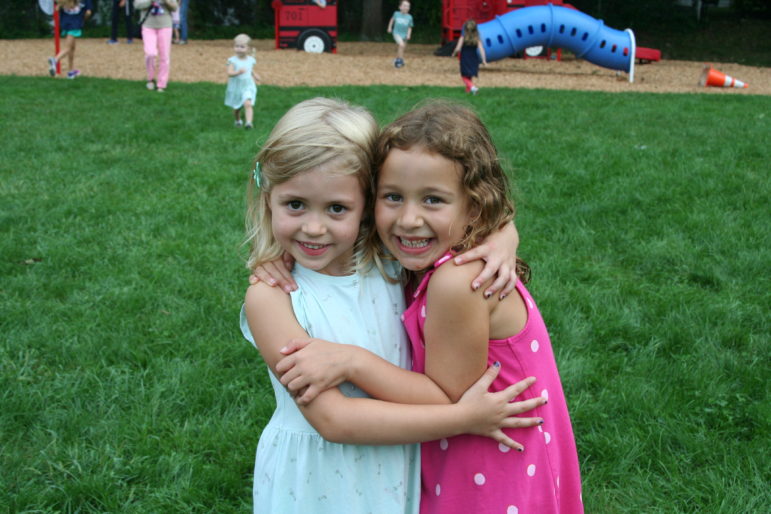 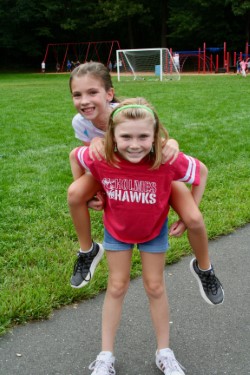 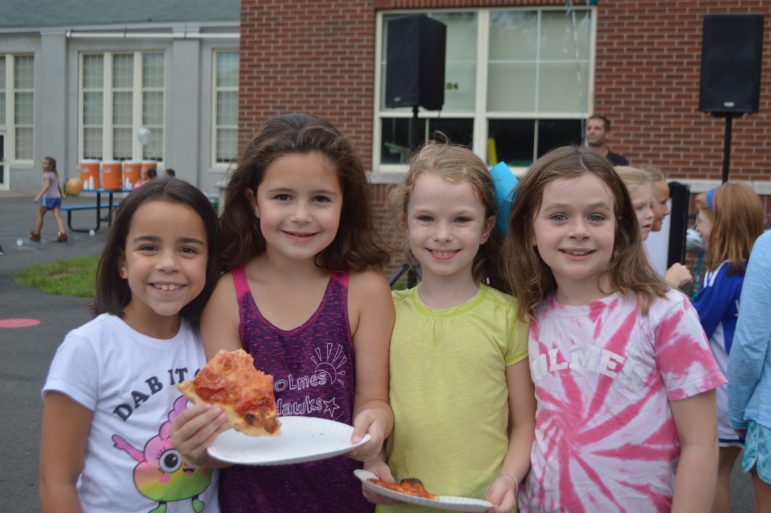 Pictures from the event: 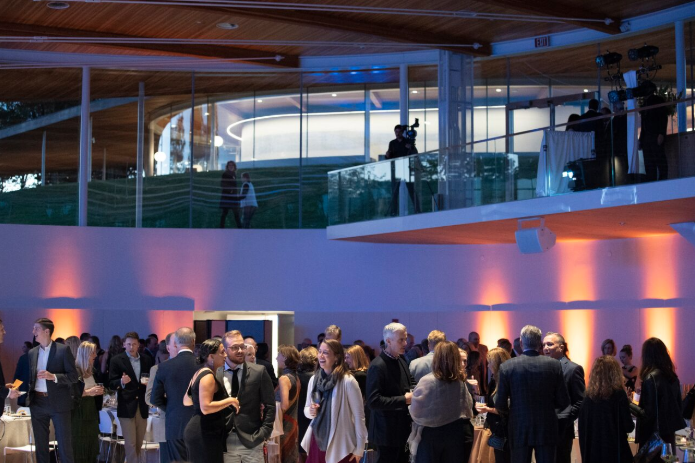 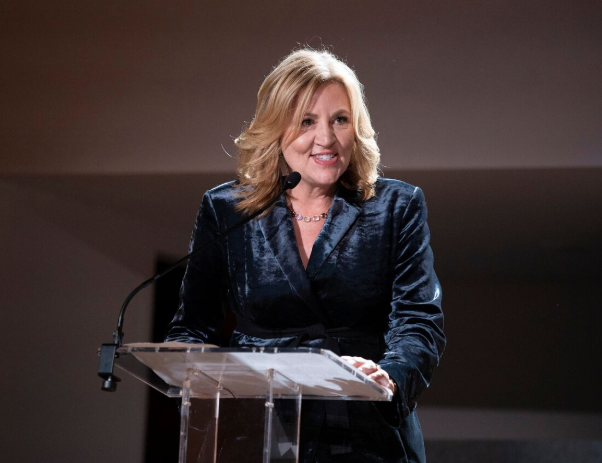 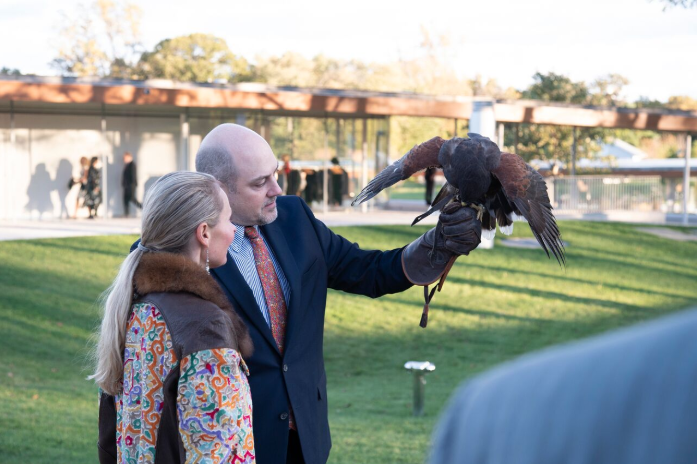 Look who just dropped in.

“The event at Grace Farms included a premiere of a new work by Pulitzer Prize-winning composer and musician Caroline Shaw, featuring poetic text by Christian Wiman, a cello quartet from Yale Cellos, and vocal alumni from Yale Institute of Sacred Music and YoungArts. DJ Alexandra Richards culminated the evening with a one-hour set and dancing. 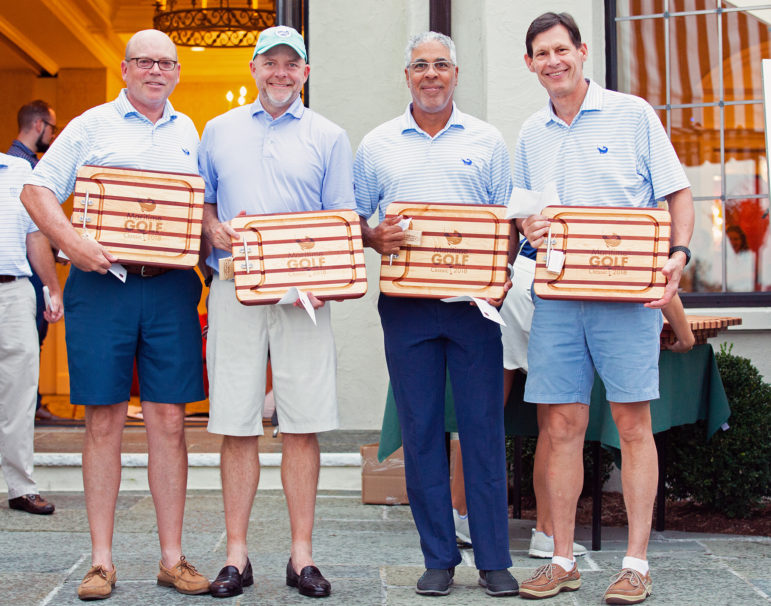 Photos from the Maritime Aquarium permalink

From left: Ed Stearns and David Durkin, both of Darien, Luis Acosta of River Vale, N.J., and Earl Mix of Darien were among the winning foursomes during The Maritime Aquarium at Norwalk’s 8th annual Maritime Golf & Tennis Classic on Sept. 17 at Wee Burn Country Club. They received special Maritime Aquarium cutting boards made by Soundview Mill Works of Darien. Nearly $160,000 was raised by 110 area business professionals to support the Aquarium’s education and conservation efforts. 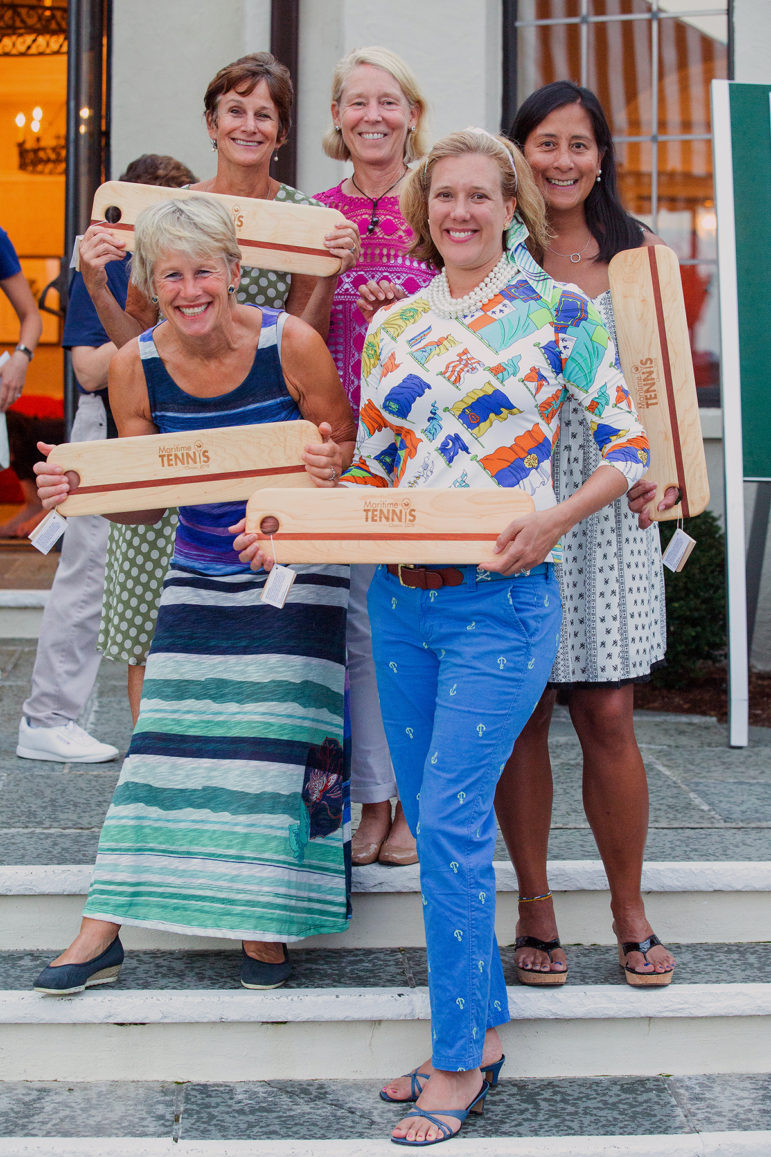 The tournament supports the Aquarium’s exploration of animal and conservation issues in Long Island Sound while also helping to provide STEM-focused educational opportunities to area students, regardless of their ability to pay. Among the foursomes were (from left) Fred Klashman of Stamford, Tim Pettee of Norwalk, Steve Cary of Norwalk and Todd Robbins of Darien.

Among the foursomes were (from left) Bob Bewkes of Darien, Michael Diamond of Fairfield, Charlie Hinnant of Norwalk and Jay Lang of Stamford. Hinnant has been the event’s chairman all eight years.

Among the foursomes were (from left) Ashish Arora of Avon, Doug Hansen of North Haven, Lincoln Schoff of Darien and Ted Tregurtha of Ridgefield.

Bagpiper Tom Kirk approaches the clubhouse, signaling the end of play in The Maritime Aquarium at Norwalk’s 8th annual Maritime Golf & Tennis Classic on Sept. 17 at Wee Burn Country Club. Nearly $160,000 was raised by 110 area business professionals to support the Aquarium’s exploration of animal and conservation issues in Long Island Sound while also helping to provide STEM-focused educational opportunities to area students, regardless of their ability to pay. 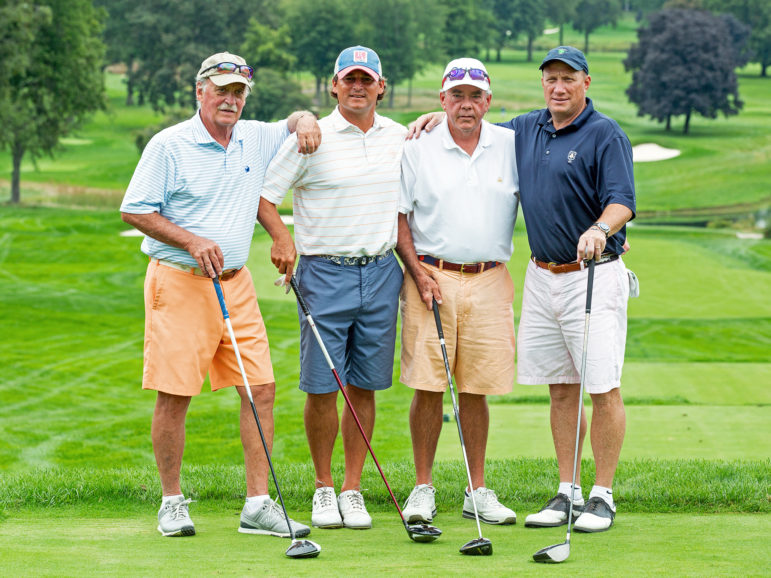 Among the foursomes were (from left) David Lindsay of Norwalk, Carter McGuckin and Mike Moore, both of Darien, and Brendan O’Brien of Norwalk.

Everyone had a (golf) ball at Ability Beyond’s popular Golf Championship and Tennis Tournament held on Oct. 1 at the Ridgewood Country Club in Danbury. The annual athletic event attracted close to 130 participants and raised $93,000 (the official goal was $80,000).

All proceeds from the event will be used by the nonprofit to continue providing job training and placement, supported living, and recreational and educational opportunities for over 3,000 individuals with disabilities throughout Connecticut and New York.

Darien Police Department’s K-9 Argo received a bullet and stab protective vest thanks to a charitable donation from non-profit organization Vested Interest in K9s, Inc. K9 Argo’s vest is sponsored by an Anonymous Sponsor and will be embroidered with the sentiment “This gift of protection provided by Vested Interest in K9s, Inc.”. Delivery is expected within eight to ten weeks. 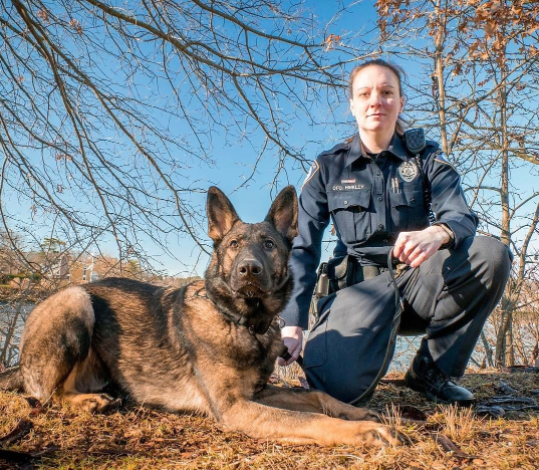 Vested Interest in K9s, Inc. is a 501c(3) charity in East Taunton, MA with the mission of providing bullet and stab protective vests and other assistance to dogs of law enforcement and related agencies throughout the country.

The non-profit was established in 2009 to assist law enforcement agencies with this potentially lifesaving body armor for their four-legged K9 officers. Since its inception, Vested Interest in K9s, Inc. provided over 2,800 protective vests, in 50 states, through private and corporate donations, at a cost of over 2.4 million dollars.

The program is open to dogs actively employed in the U.S. with law enforcement or related agencies who are certified and at least 20 months of age. New K9 graduates, as well as K9s with expired vests, are eligible to participate.

There are an estimated 30,000 law enforcement K9s throughout the United States. For more information or to learn about volunteer opportunities, please call 508-824-6978. Vested Interest in K9s, Inc. provides information, lists events, and accepts tax-deductible donations of any denomination at www.vik9s.org or mailed to P.O. Box 9 East Taunton, MA 02718. 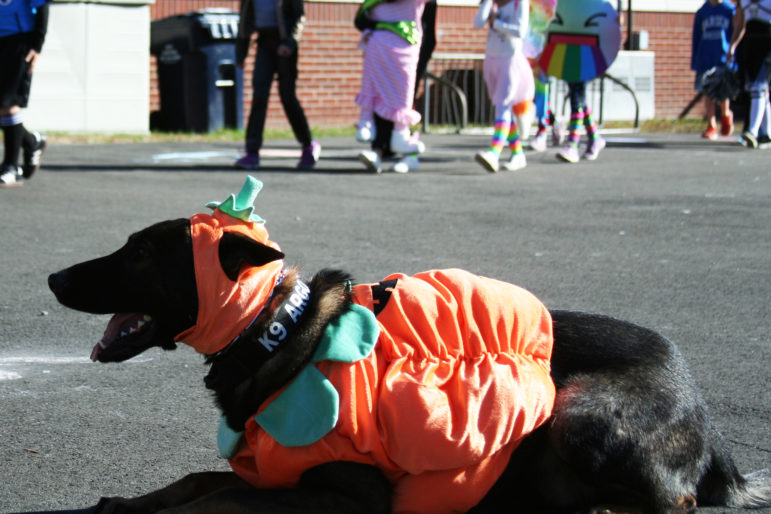 For purposes of — well, we like the picture — Argo the K-9, in a completely different outfit from around Halloween (a disguise for undercover work).