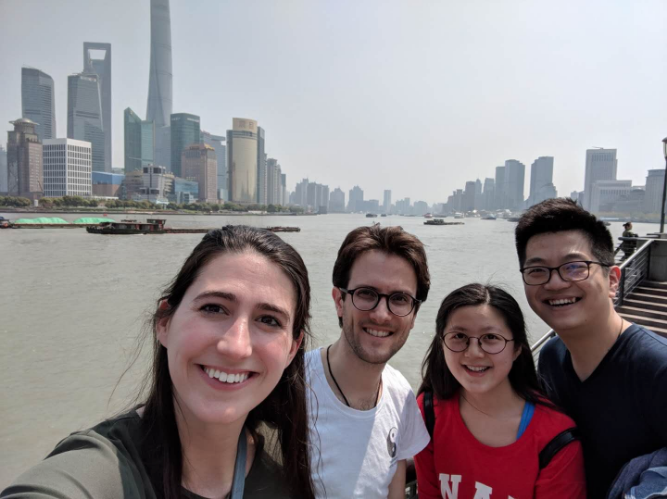 Last week, these photos of DHS students in the China Exchange program were posted on Twitter. Here, they're touring the Bund in Shanghai with a local teacher.

Last week, these photos of DHS students in the China Exchange program were posted on Twitter. Here, they're touring the Bund in Shanghai with a local teacher. 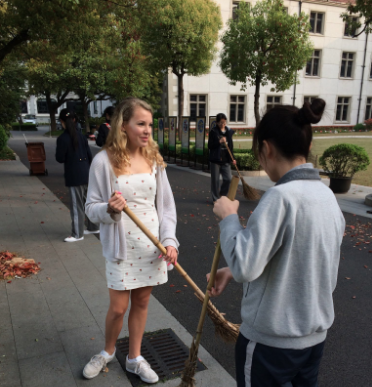 A DHS student in the China Exchange Program doing morning chores during the recent visit to Shanghai.

DHS students in the China Exchange program standing on the steps of the Main Hall of Shanghai No. 3.

During the DHS China Exchange program trip: "playing an icebreaker after an Easter Egg Hunt." 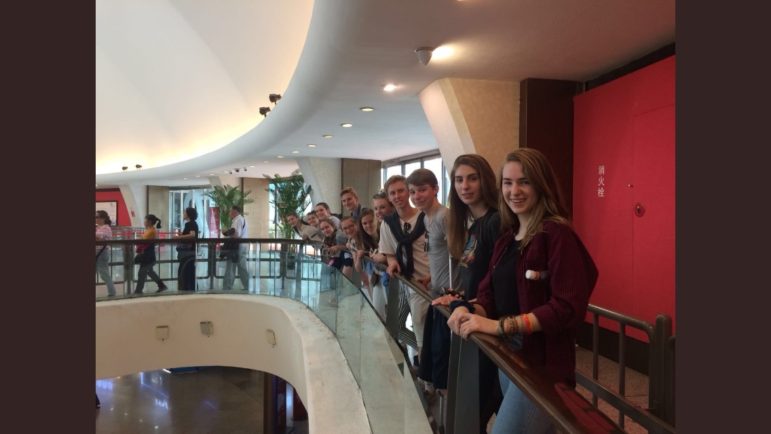 We don’t know who took each of the photos, but DHS Assistant Principal Kate Dimoulas posted them on Twitter. In one post, she wrote: “(Thanks, Mr. Banas, for sharing!)” 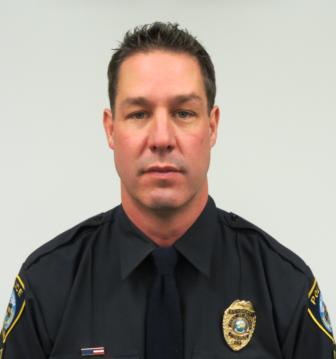 Darien police Lt. Jeremiah Marron Jr. recently took the “Command Training Series: Mid-Management Course,” a one-week training program for upper-level personnel. It was presented by the Justice System Training and Research Institute at Roger Williams University in Bristol, R.I., in partnership with the New England Association of Chiefs of Police.

Coursework addressed contemporary concepts of management and leadership relevant to the responsibilities of first line supervisors in a modern police agency.

Pictures from all over town: 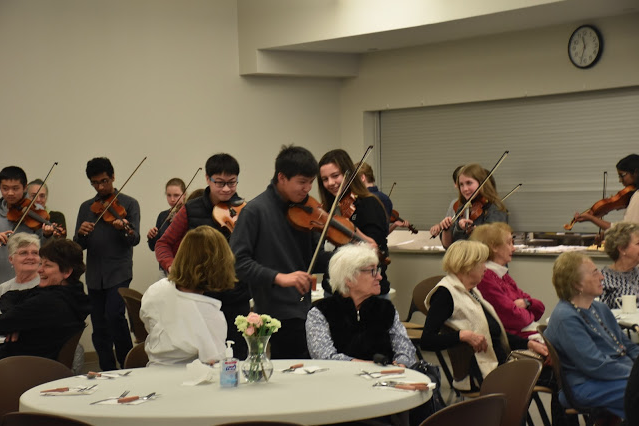 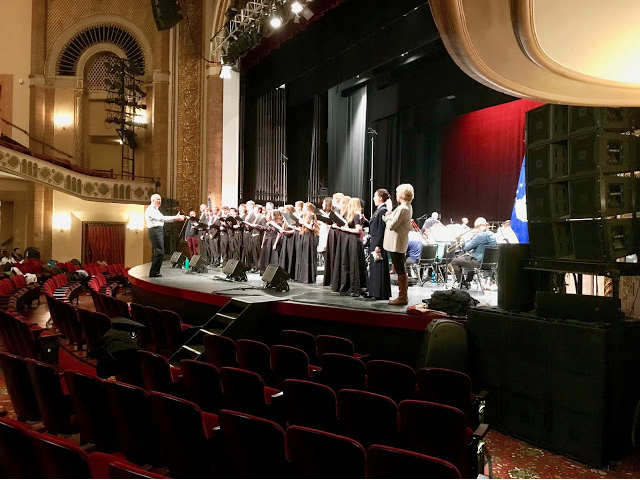 On Tuesday, April 3 twenty members of the Darien High School Tudor Singers joined the United States Air Force Concert Band and Singing Sergeants Chorus on stage at the Palace Theater in Stamford for a finale performance of Irving Berlin’s “God Bless America.” Here, the students rehearse with the ensembles under the direction of Colonel Larry H. Lang. Christopher Andrade is the director of the Darien HS Tudor Singers.

Photo and caption from ABC Darien on Facebook permalink

An announcement from A Better Chance Darien: "It is Vespa Raffle Time!! Please help support A Better Chance in Darien by purchasing your raffle ticket from your favorite Board Member, send us a message on Facebook or look for us around town."

William Raveis, along with Baywater Properties and PG Properties, will be lead/platinum sponsors of the OPUS for Person-to-Person annual spring gala (the Masquerade Ball), OPUS’ largest annual fundraiser. Pictured: Jake Fay of William Raveis with Jessica Occi and Danielle Santoro of the OPUS Corporate Development Team.

The panel discussion on "Darien and the Opioid Crisis" — postponed last month because of snow — is now scheduled for May at Darien Library. 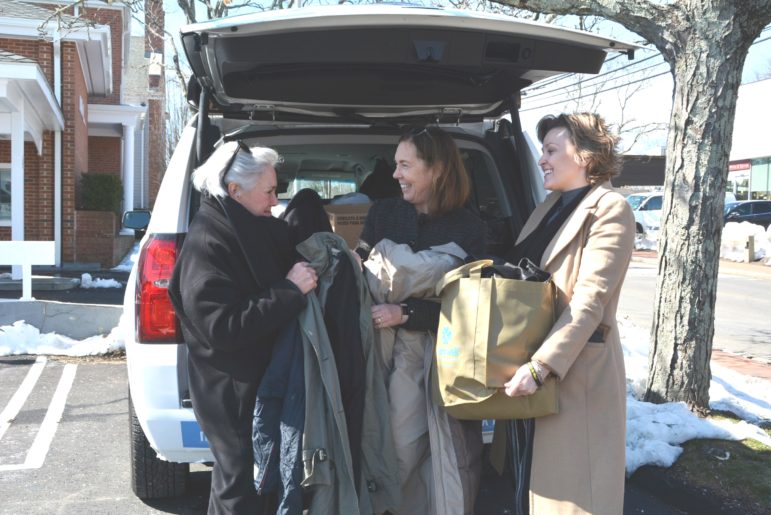 Bring in a new cleaning product when you join as a new or returning member and they’ll waive your Joiner Fee — a $100 value.

Already a member? Tell a friend to join and if they join as a new member, you’ll get a $100 credit for use on registration for a Y program.

The offers are good until June 1, 2018. All cleaning supplies will be donated to Darien Human Services Department.

(Darien Y scholarship recipients are not eligible for the refer a friend promotion, and the credit applied towards programs at the Darien YMCA only.) 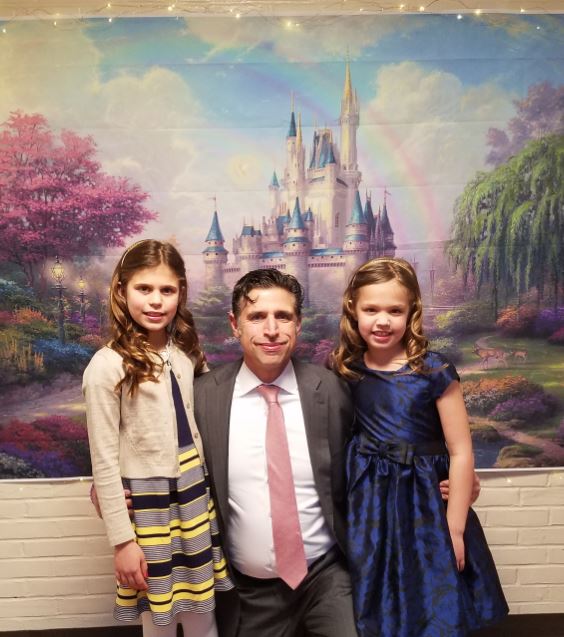 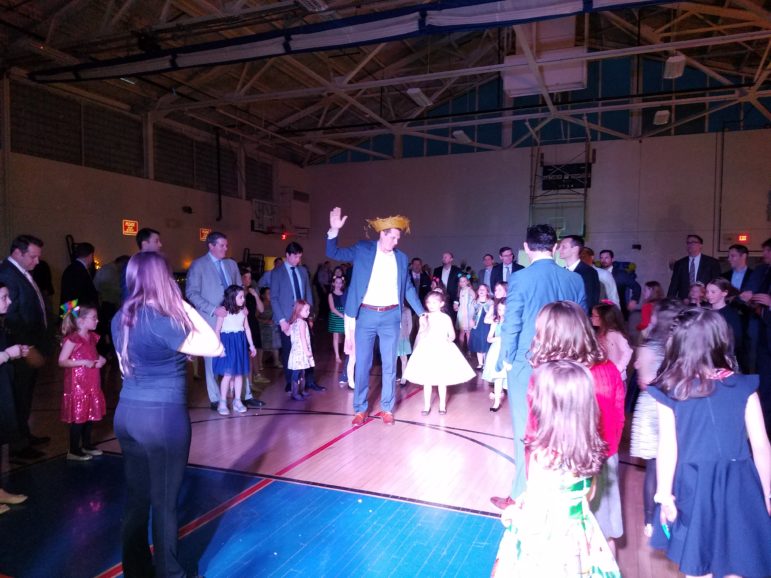 Conga line: The majestic evening was filled with stunning dresses, well-dressed Dads and ALL KINDS of dance moves

Whether deciding to head straight for the dance floor, or be silly in the photo booth, or possibly indulging in the “castle cravings” spread, there were plenty of opportunities to make magical memories to last a lifetime.

Parks and Recreation would like to thank all the Daddys and Daughters who joined us for such a special evening. 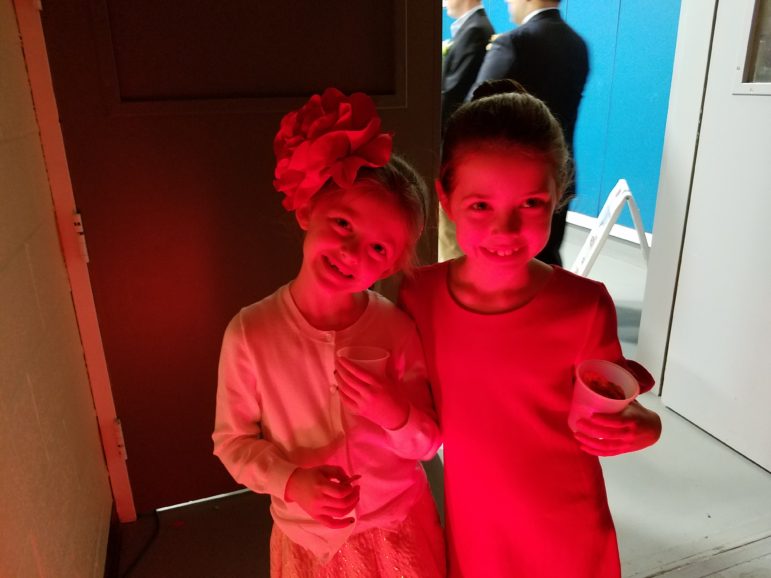 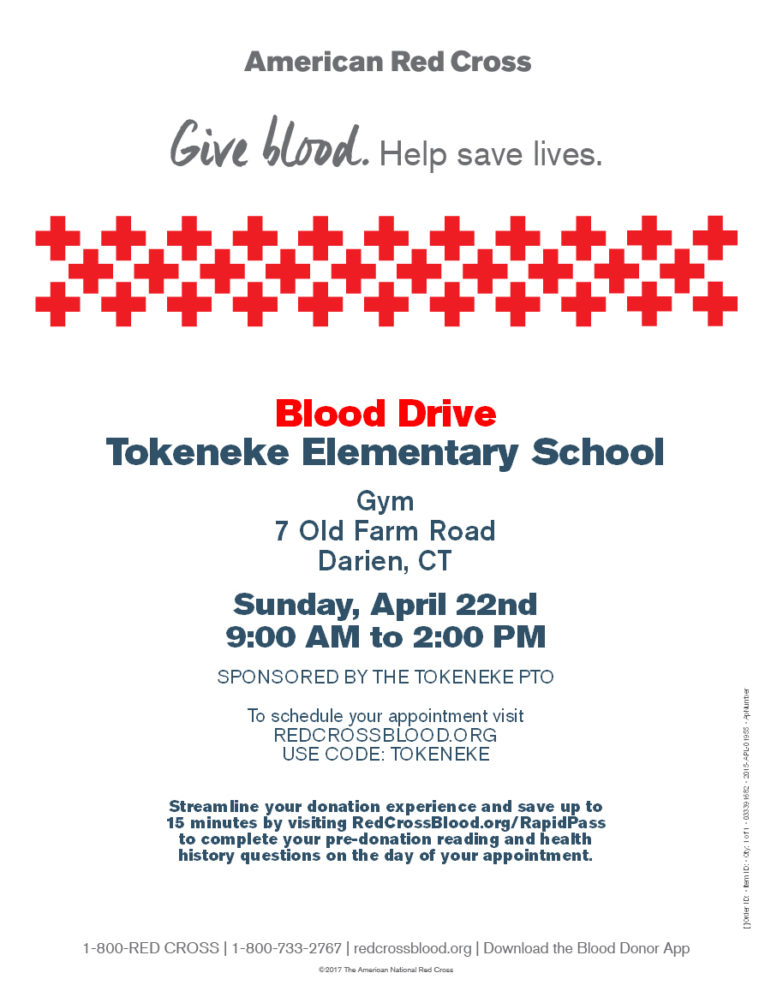 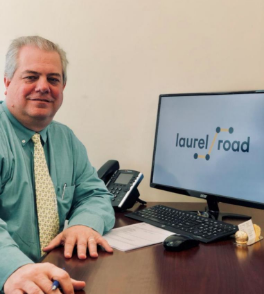 Darien Rowayton Bank’s new name is Laurel Road Bank (as of Jan. 15, officially) and Arthur Murphy, Jr. has been named vice president and branch manager of the Darien office, in charge of day-to-day operations of the branch.

“Art has a wealth of experience in retail banking with over thirty years in many different capacities from teller on up to most recently, regional manager,” an announcement said. “The bank will be leveraging Art to lead its existing customer relations efforts, business development and community activities.”

“Art is a lifelong resident of Stamford, where he currently lives with his wife and three children. Art is very active in his own community and intends on becoming more active in the Darien community as well.” 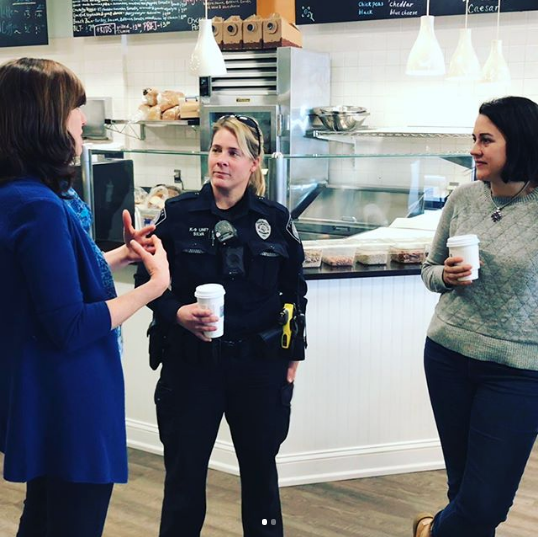 “Today, at Upper Crust Bagel Company, the Darien Police held their first casual meet-and-greet session known as ‘Coffee with a Cop,’” the department said in a news release.

“Given that police work is often formal in nature, Officers enjoyed the chance to talk to residents in a more relaxed setting over a cup of coffee. The informal setting gave way to open conversations about trends, concerns, and other relevant topics that people wanted to discuss with an officer.

“The department plans on holding more of these sessions in the near future at varying locations around town, so keep an eye out for our next date so you can come visit with your officers.”

Anthony J. Homicki, Darien Assessor, advises all senior homeowners over the age of 65 who may be eligible for tax credits on their real estate property tax under the Circuit Breaker (State Program), Town Program, or Elderly Tax Deferral, that applications are being accepted now and must be filed before Monday, May 15, 2018.

Any homeowner reaching the age of 65 on or before December 31, 2017 and qualifies within the income limits, should come into the Assessor’s Office and apply by May 15, 2018. 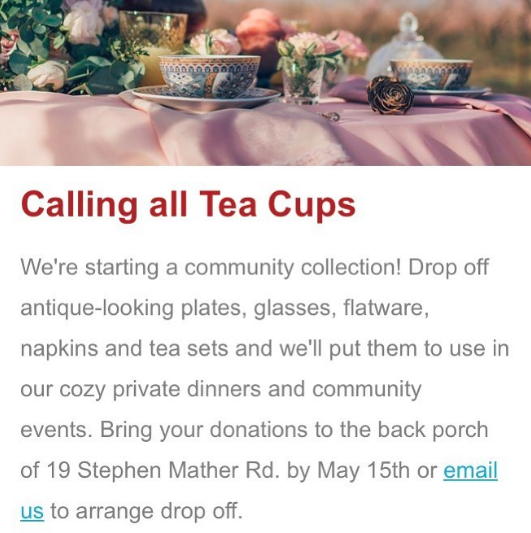 An announcement from Mather Homestead on Face book: ” Calling all tea cups! We’re collecting antique-looking plates, glasses, flatware, napkins and tea sets. If you’d like to make a donation, please let us know!”

You can email the Mather Homestead at info@matherhomestead.com. 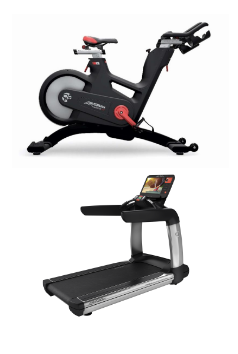 Pictures from the Darien YMCA newsletter

Darien YMCA announced in its newsletter that new Life Fitness ICG7 spin studio bikes have arrived, and several of the new Discover SE3 Consoles Treadmills in the Y’s fitness center.

“Pick up a guest pass and invite a friend to join you in an indoor cycling class!” the newsletter said. “Passes are available in the indoor cycling studio.”

If Darien residents are in need of a walker, wheelchair, crutches, or a cane, you can borrow them, on a short term basis, from Darien Human Services Loan Closet.

Just call 203-656-7328 to reserve what you need. You, or someone on your behalf, can stop by to pick up the equipment. There is no charge for this service.

U.S. Senator Chris Murphy (D-Conn.) on Thursday honored Lt. Rev. Thomas M. Conway, a Waterbury resident and American hero who sacrificed his life to care for fellow sailors after the sinking of the USS Indianapolis on July 30, 1945, during World War II. Murphy placed a statement in the Congressional Record honoring Father Conway on what would have been his 110th birthday.

Mr. President, today I wish to honor the life and legacy of a World War II hero: LT Rev. Thomas M. Conway, born April 5, 1908, in Waterbury, CT. Father Conway, who was born 110 years ago next month, was an American hero who, after the sinking of the USS Indianapolis (CA-35), went from lifeboat to lifeboat in shark-infested waters to care for his fellow sailors in a manner far above the call of duty.

The courage of the brave men who served on the USS Indianapolis, who delivered critical parts to the first atomic bomb used in combat, helped bring about the end of World War II. After their mission was complete, they were intercepted on their way to join with the rest of the Pacific fleet for the invasion of mainland Japan.

Two torpedoes from a Japanese submarine struck the Indianapolis on July 30, 1945, sinking the battleship and immediately killing 300 of the 1,196 sailors aboard. The remaining 900 sailors were left to fend for their lives in  the shark-infested Pacific, spending 3 days with few lifeboats or supplies and no way to notify the Navy of their peril.

Father Conway, as chaplain, disregarded his own safety by swimming back and forth among the men, administering aid, helping to gather those who had drifted from the mass of survivors, and continuing to minister and organize group prayers. His heroism gave comfort to the  dying and helped save the lives of the 321 sailors who were rescued from the sea.

Father Conway’s acts of bravery took a physical toll, and he succumbed to the elements shortly before rescuers arrived. As one surviving sailor said of Father Conway, “He was the most visible person keeping the men together, giving them hope and sacrificing himself to keep his fellow sailors united, calm, and alert.”

The legacy of Father Conway continues to inspire his family, fellow sailors, and the people of Connecticut. That is why next month, in recognition of his birthday, we pause to reflect upon and celebrate his courageous actions. His selflessness and bravery are the epitome of an American hero.