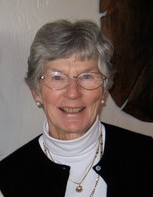 Gay Reichart’s funeral will be held Saturday, May 28.

Throughout the indignity of her battle against breast cancer (diagnosed in 2012),  she was the picture of dignity to her very last day. She had an unusual combination of ethics and etiquette mixed with a big helping of playfulness.

In her later years, she became a prolific and talented quilter. (Many in the family have a Gay Reichart original on their beds or couches.)

What a gift she was and what a terrific legacy she’s left us to follow.

Born in Norwich in 1930, in the teeth of the Great Depression, she graduated from Norwich Free Academy in 1948, then from Boston’s Katherine Gibbs School in 1950.

While working in New York City for Fawcett Publications, she met a handsome salesman named Walter Reichart, and married him in 1952. They later moved successively to Old Greenwich, Stamford and then Darien, where they raised their three children from 1966 to 1983.

Before retiring to Gay’s family summer cottage in Niantic in 1988, they spent five years in Stratford’s Oronoque Village. But “the cottage,” as it was simply called, was her favorite. Built by her grandfather in 1939, it perched above a seawall looking out on beautiful Niantic Bay, within a short walk of the Niantic Bay Yacht Club, where she was a lifetime member.

Following Walter’s death in 2001, Gay and Gene Falcone discovered a sweet connection and were married in 2006 — at the cottage, of course. After a spate of hurricanes, though, they moved to Old Lyme in 2013, and overall, had 15 very good years together.

In addition to Gene Falcone, she is survived by her sister, Joan Murphy; all three of her adult children, Susan Allen, James and John Reichart — along with their spouses; plus seven admiring grandchildren (with one great-grandchild on the way).

A memorial service will be held at 2 p.m., Saturday, May 28 at Christ Episcopal Church, 11 Park St., on the village green in Guilford.

In lieu of flowers, please consider donating to the Center for Hospice Care, 227 Dunham St., Norwich, CT 06360 or Yale New Haven Hospital, Office of Development, P.O. Box 1849, New Haven, CT 06508 (or online: www.givetoYNHH.org and click on “give to someone special”).