Jayme Stevenson recently said she’ll be running for the Connecticut GOP nomination for lieutenant governor, with one of the themes of her campaign that women should play a prominent role in the leadership of the next governor’s administration. 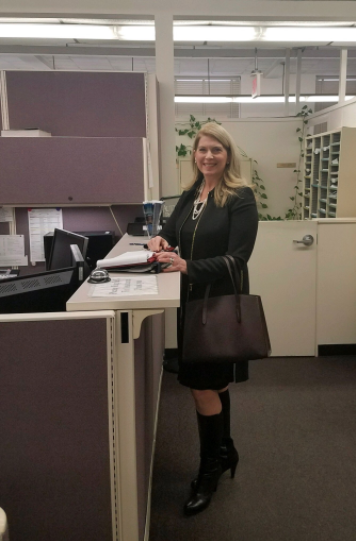 Stevenson posted this picture of herself filing her candidacy for lieutenant governor at the Secretary of the State’s Office in Hartford on Wednesday, Jan. 31.

“I would like to become lieutenant governor to be part of a team of leaders that can start to move the state in a different direction” from the current Democratic administration of Gov. Dannel Malloy, a Stamford Democrat now finishing his eighth year in office.

“I also believe that the right team needs to have women as part of the team,” she said. “We women have unique skills that the state will benefit from.”

As a symbol of her point that women can play a more prominent role in running the state, Stevenson said that she’s putting together an all-women campaign staff.

“I’m doing it to change the narrative of the Deomocrats that the Republican Party is anti-women. It couldn’t be farther from the truth, and I want to role-model that.”

Stevenson has been a selectman and later first selectman of Darien, and has been active in regional and state municipal organizations, particularly the Western Connecticut Council of Governments.

“I think the skills I have acquired in public service locally, regionally and, I guess, also at the state level have given me a well-rounded perspective on the issues of the state and of issues in municipalities across the state,” she said.

Two other Republicans are in the race already: Ann Brooks, a Westbrook tax attorney who announced her candidacy in December (and ran for Congress in 2016), and state Sen. Joe Markley of Southington has also announced a run.

Stevenson said some gubernatorial candidates might shift to running for lieutenant governor.

“I think there are a number of excellent gubernatorial candidates who are running right now,” she said. “I’m doing my homework on all of these candidates. […] I would be honored to serve with several.”

Darien’s chief executive officer said she won’t be doing less for the town while she’s running for statewide office: “I just have to work twice as hard now that I have two jobs.”