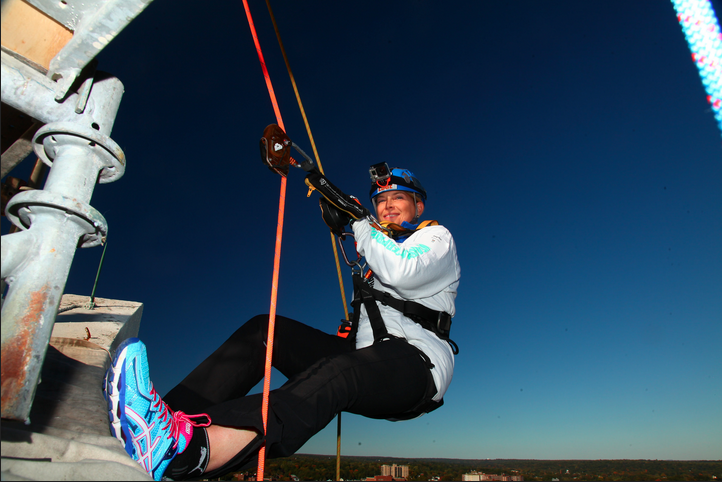 Jayme Stevenson rappelling down Stamford's Landmark building as part of the "Shatterproof Challenge."

Darien First Selectman Jayme Stevenson, very likely the first first selectman ever to do such a thing, rappeled down a skyscraper on Saturday.

How did you spend your weekend?

Jayme Stevenson rappelling down Stamford\’s Landmark building as part of the “Shatterproof Challenge.”

Stevenson was one of 100 people participating in a recurring rappelling event called the “Shatterproof Challenge” and organized as a fundraiser for Shatterproof, a national organization headquartered in Norwalk and dedicated to “protect[ing] our children from addiction to alcohol or other drugs and end the stigma and suffering of those affected by this disease.” 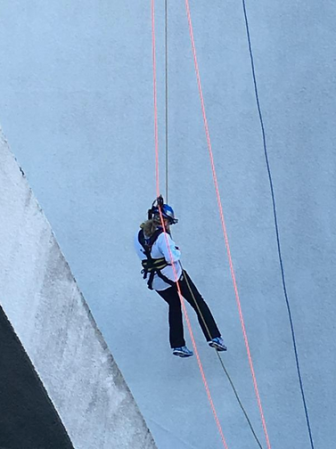 Picture from Stevenson’s Twitter account of her toward the end of the rappel down the Landmark building.

The organization tries to lessen the stigma of drug and alcohol addiction,  support research and innovation to combat addiction and advocate for more resources devoted to research.

The “Shatterproof Challenge” is one way the organization tries to lessen the stigma. It also raises funds. Rappellers raise money for the cause as they would for a walk-a-thon or charity race, by getting sponsors.

Stevenson’s Web page on the organization’s website says she raised $2,420 from sponsors and lists them. The five biggest sponsors: $500 from an anonymous donor, $250 from another anonymous donor, David Genovese ($250), John McFee ($250) and Stevenson herself ($200).

“Addiction is preventable and treatable,” Stevenson said on the Web page. In the United States alone, alcohol and other drugs claim more than 135,000 lives every year — 370 people every day including our children.”

Stevenson was scheduled to rappel down the building at 2 p.m. She posted a picture of herself descending the building on Twitter. Her comment: “Wow, that was crazy!”