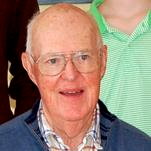 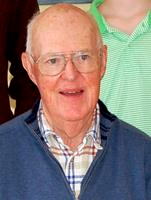 Ed was born on May 8, 1936 in Sodus, N.Y. to Edward Elliot Burns, Sr. and Frances Case Burns. He graduated from Deerfield Academy in 1954, Dartmouth College in 1958 and Tuck School of Business in 1959. Following college he served as a lieutenant in the United Stated Coast Guard.

In 1965, Ed joined First Boston Corporation in New York City and later moved to Mitchell, Hutchins & Co. (acquired by Paine Webber in 1977) where he was put in charge of the trading desk.

In 1979, he married Winthrop “Windy” Reid in New York City. They began their 38-year marriage in Rumson, N.J., later moving to Darien where Ed started his own financial firm, Stover Haley Burns, Inc.

— This obituary previously was published by the New York Times

Toward the end of his career he and Windy moved to Kittery Point, Maine, where he ultimately retired.

Ed is survived by his loving wife, Windy, and their dog, Penny; two sons from his first marriage; the eldest, Ned Burns of New Canaan, and his wife, Jennifer Burns and their children Erik and Charlie Burns; and his younger son, Christopher Burns of Weehawken, N.J. and his wife Gina Nagy-Burns.

Known as Pop-Pop to all who loved him, Ed was a passionate gardener and a lover of boats and travelling. His kindness, strength and bright blue eyes will be missed.

A memorial service in celebration of Ed’s life will be held at Trinity Church in York Harbor, Maine at 11 a.m. on July 23, 2016.

As an expression of sympathy, memorial contributions in honor of Edward E. Burns, Jr. may be made to York Hospital, 15 Hospital Drive, York, ME 03909. Attention: Friendraising Office c/o Hilary Leonhard.