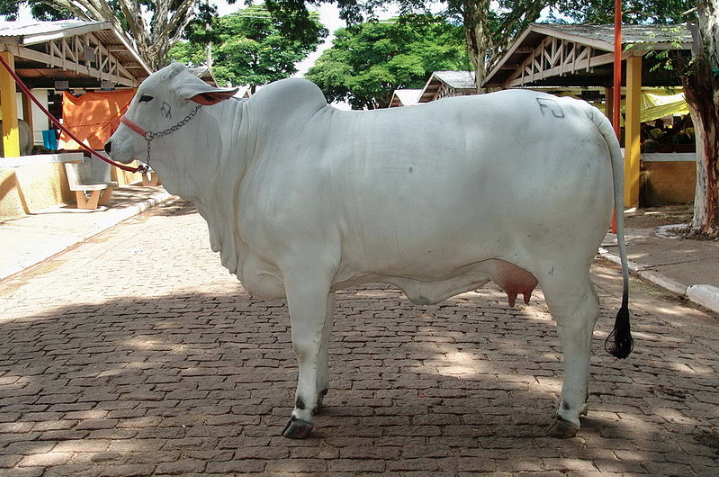 Like public concerns properly discussed in public forums, this is NOT a sacred cow. (2007 photo from Brazil.)

The accusations are exaggerated, sometimes inaccurate and occasionally nonsense.

Readers can see that for themselves in the excerpt of his speech we’ve published at the bottom, and compare that with what the letters said.

The entire budget for town operating expenses (not including debt service and sewer service) outside of education is $29.8 million.

The entire town budget this year, including everything, is $142.3 million. Special education is more than a sixth of it.

If you’re a responsible town official — or citizen — who’s going to look at spending, you need to look at special education spending.

In one letter said to have been sent to Zagrodzky and then published as a letter to the editor of the Darien Times (not sent to Darienite.com), Katrina O’Connor writes:

O’Connor’s letter was more than respectful and encouraged Zagrodzky to work with both the Board of Education, the district and parents. Well, he’s done a lot to work with the board and district officials already. Perhaps no one in town has talked more about having a cooperative, freely communicating relationship between those groups and the Board of Finance and Representative Town Meeting on budget issues. O’Connor’s implicit criticism that he’s doing otherwise is inaccurate.

As for objecting to the term “aggressive” as applied to parents advocating for special education students — well, that’s just exactly what O’Connor is doing in her letter. Zagrodzky didn’t even criticize special education parents for it. Take a look at what he said, as published Dec. 12 in Darienite:

Do we want public officials in our town to avoid doing their best to control costs while doing “the best that we can for all parties concerned”? Isn’t that an accurate description of what we actually elect them to do?

O’Connor made a good point in recalling that previous town officials had been criticized for pressuring district officials on special education spending, and she quotes from a town report on that point.

Another letter (also not sent to Darienite), from several parents and sent “[o]n behalf of behalf of the Darien Special Education Parent Advisory Committee (SEPAC),” went farther — too far, in fact.

Zagrodzky didn’t suggest reducing special education costs — or if that’s what these parents think is implied when Zagrodzky says officials must “do our best to control costs” they are mistaking the central reason we have a town Board of Finance with a call for cutting spending.

To find that “offensive and divisive” is to find any examination of costs and any proper functioning of town officials tasked to look at costs “divisive,” particularly officials on the Representative Town Meeting, which votes on the overall education budget.

Like concerns of proper interest to the public and properly discussed in public forums, this is NOT a sacred cow. (2007 photo from Brazil.)

In fact, Zagrodzky and others have praised the school district when it has implemented an education program that is less expensive than the programs it replaced while offering what district officials called a better program — the Fitch Academy.

[Correction: We originally said this was a special education program. Technically it isn’t, and perhaps students attending Fitch aren’t or aren’t all in special education. We think it’s a technicality. The point is that it’s the kind of program Zagrodzky has supported and is looking for.]

Former schools Superintendent Dan Brenner, who used the expertise and experience he brought to the school district to start the Fitch Academy program, said the district could offer special education programs within the district, saving money while providing services as good or better than more expensive out-of-district programs.

Unfortunately, Brenner left Darien for another job. We hope that when the next superintendent (preferably one with experience and expertise at least approaching Brenner’s) is hired and implements those kinds of programs.

To get back to our main point: Saving money and providing good services has been almost a mantra of Zagrodzky’s for years.

Zagrodzky even pointed out in his speech that in the past two fiscal years, special education costs have stopped rising the way they were for several years before.

As a community, we should look at options to create special education programming within our district, make classrooms more accessible and ensure our teachers are trained in best practices to teach all students.

What the parents who wrote this letter may do, if they aren’t careful, is create a politically “correct” zone (covering the entire town) where proper community concerns about spending are not allowed to be voiced, because merely stating obvious duties is deemed “offensive and divisive.”

The letters and Zagrodzky’s speech and previous public comments point the way to a constructive consensus, but only if parents and taxpayers take some deep breaths and avoid excited exaggerations.

Zagrodzky speaks from about 25:30 to about 58:30 (including Seth Morton’s comments at the end):

Here’s the part about special education spending in Zagrodzky’s speech, copied from the transcript of it that Darienite.com published on Dec. 11. Readers can see for themselves if they find anything “inaccurate, divisive and offensive” in it, or otherwise objectionable:

But those [education] expenses have grown more quickly than the town expenses, and so I thought it was worthwhile to spend a few minutes looking more closely at that. 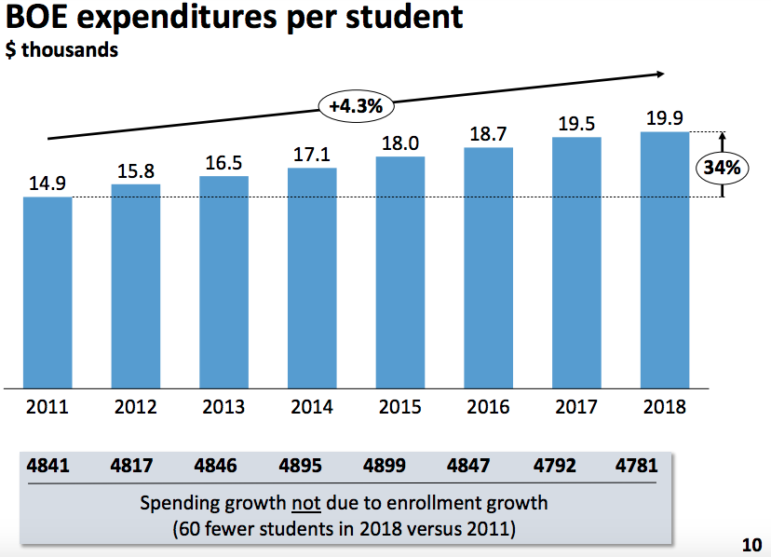 It’s important to note that the Board of Education total expenditures grew by about 4.1 percent on that slide that I showed earlier.

You see, however, that on a per-student basis they’ve actually grown slightly more, and the reason for that is that the number of students for 2018 is actually slightly fewer than it was back in 2011 — very, very flat numbers in terms of students […] The spending growth that you’re seeing, to be clear, is not because we have more students. Spending growth is for other reasons.

The thing I wanted to point out though is that most of that, if not all of it, really is special education.

[Board of Education Chairperson] Tara [Ochman] has brought up the point that it’s important to us to provide for the needs of those students, and I applaud that. At the same time we also need to be open about just how much that costs. 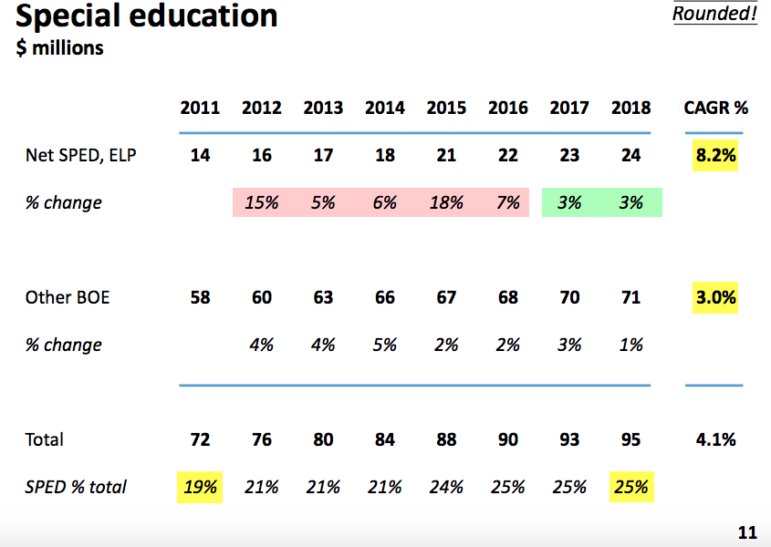 So let’s take a look at a few of these numbers.

I’ve rounded to keep these charts simple, but you can see up at the top, what I’ve tried to do with this chart is to break out what I call “net special education” — so this is all special education, ELP [Early Learning Program] net of the special education reimbursement by the state, that’s that top line, and then I just did math and said “all other Board of Education” [spending]. 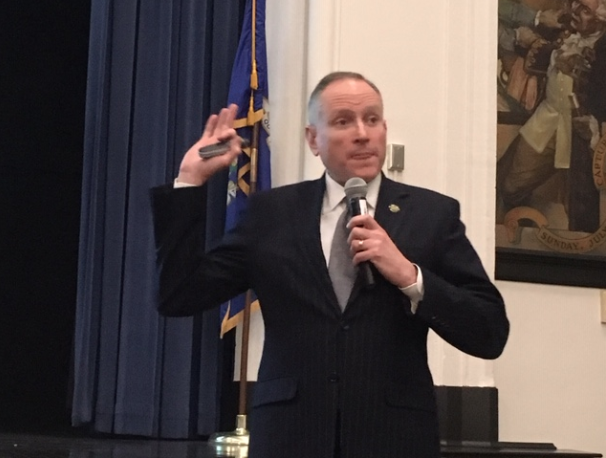 Zagrodzky making a point during his State of the Town address.

So what you see is, first of all is the difference in growth rates between net special education spending and all other spending by the Board of Education. If you just look at “all other” it’s about 3 percent.

So if you think about inflation and union contracts, that feels like a number that you’d like to see over a long period of time, especially given the number of challenges that Tara [Ochman] articulated around investments we have to make in things like security and all of that. Those are all important things.

But if you look at the net special education, that compound annual growth rate [CAGR in the chart above] over that same period of time is north of 8 percent.

You’ll see, though, if you look a little more closely, that most of that growth was in the period of time when we had all the difficult special education discussions and debates — 2012, ’13, ’14, ’15. And you can see there were several years though when the spike in special education expenditures was not trivial.

The good news is that in the last two years, at least, the net special education figure looks a lot better than it has historically, so that’s a good piece of news here in terms of trends.

And with that growth rate of 3 percent [in recent special education spending] starting to equal the growth rate in the rest of the Board of Education budget, if that’s maintained, then this 25 percent figure will stay static. 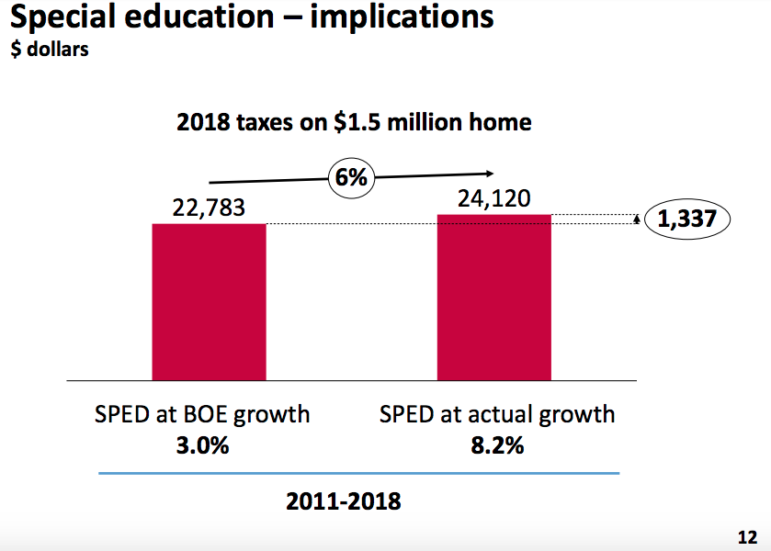 This chart requires a bit of explanation, but I wanted to drive home how much the increase in special education costs impacted the taxes, say, on an ordinary home — well, maybe not too ordinary. But what you’re looking at is the 2018 taxes on a home with an assessed value of $1.5 million.

The actual taxes on that home in 2018 were $24,120. What this chart […] tries to show you, hypothetically is that instead of special education growing at 8.2 percent, like it did over that period, what if it grew at 3 percent, like the rest of the Board of Education budget?

If it had grown at 3 percent, instead of at 8.2 percent, the taxes in 2018 on that same house would have been $22,783. In other words, the taxes on this house are 6 percent higher this year than they would’ve been, because of the increases in special education spending — a difference of $1,337.

The point that I’m trying to make in showing you all of this is that it’s important that we talk about special education. We have to talk about it in terms of complying with the law and regulations; we’ve got to talk about it in terms of doing the right thing for students, and helping them become successful and productive citizens — but the discussion is incomplete if we do not talk about how much it costs, and we just have to be eyes open about these types of analyses and how much this education actually costs.

I applaud the Board of Education for the hard work that they do in trying not only to understand those costs, but to manage them as efficiently as possible. It is not an easy job, by any means.

Editor’s note: A correction was made to a small point, as noted above, and the paragraph immediately below it was rewritten at 9:49 p.m., Dec. 20.