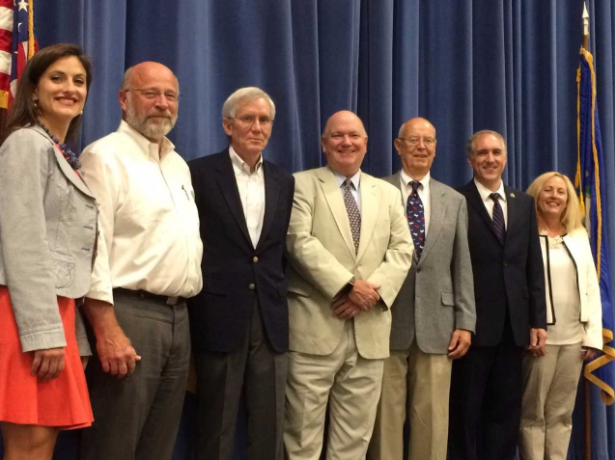 Selectman Rob Richards was chosen by Democrats on Wednesday as their candidate for First Selectman, opposing incumbent Republican Jayme Stevenson.

“My ability to solve problems and smile often has brought our community together and put to bed many longstanding issues,” Richards said in his acceptance speech to the town Democratic Caucus.

Richards said he worked with both sides in two of the most contentious community disputes in the past couple of years: The conflict over bringing lights for night games at Darien High School and the battle over whether to have paramedics based in town full-time.

In both cases, Richards said he sought out people from both sides, listened to their concerns and worked to promote a compromise or a settlement.

“Rob is a listener, a thinker and problem solver,” said Democratic Town Chairman David Bayne in nominating Richards for the job. “Rob has shown the importance of listening to Darien residents and building bridges to resolve contentious issues.”

Richards and the other candidates were endorsed by the Democratic Town Committee at an earlier meeting, but committee members were asked not to reveal the endorsement until Wednesday night at the caucus.

All nominees were endorsed without opposition at the caucus, where fewer than 30 Democrats were present, mirroring the turnout for the town Republican Caucus in the same room the night before.

Joining Richards on the Democratic ticket for Board of Selectmen will be incumbent Selectman Marc Thorne and newcomer Pam Sparkman, someone Richards got to know when they each picked up their children or dropped them off at school.

Glenn Ritch, a property manager with Albert B. Ashforth Inc., was endorsed for the Board of Assessment Appeals, replacing Sharad Samy, who did not run for re-election.

Jennifer Leahy, whose career is in real estate, was nominated for the Planning & Zoning Commission, replacing Eric Voigt, who also did not run for re-election.

Democrats did not nominate anyone for town clerk, treasurer, tax collector or constables. The First Selectmen race will be the only one on the ballot, unless other town residents petition for a primary or decide to run as independent candidates.

If that doesn’t happen, the composition of elected boards in Darien (except for the Representative Town Meeting) is largely already set: Except for the Board of Selectmen, Democrats will be elected to the minimum number of seats reserved by state law for the minority party on town boards, Republicans to the seats reserved for the majority party.

Right now there are a total of six candidates for seats on the board. The Republican candidates, nominated at Tuesday night’s GOP Caucus, are First Selectman Jayme Stevenson and Selectmen Charles “Kip” Koons Jr. and Susan Marks.

Editor’s note: Some additional information may be added to this article. When additions are finished, this note will be removed.