With Darien players on the fields, courts and golf course, Greens Farms Academy boys lacrosse and the boys and girls tennis programs both had solid weeks with big wins last week, highlighting the action on the campus in Westport.

Here’s a rundown of what went happened:

Zach Liston (Wilton) scored four goals, including the game-winner in overtime to lift GFA to an 11-10 win over the defending league champs from Hamden Hall on Monday. 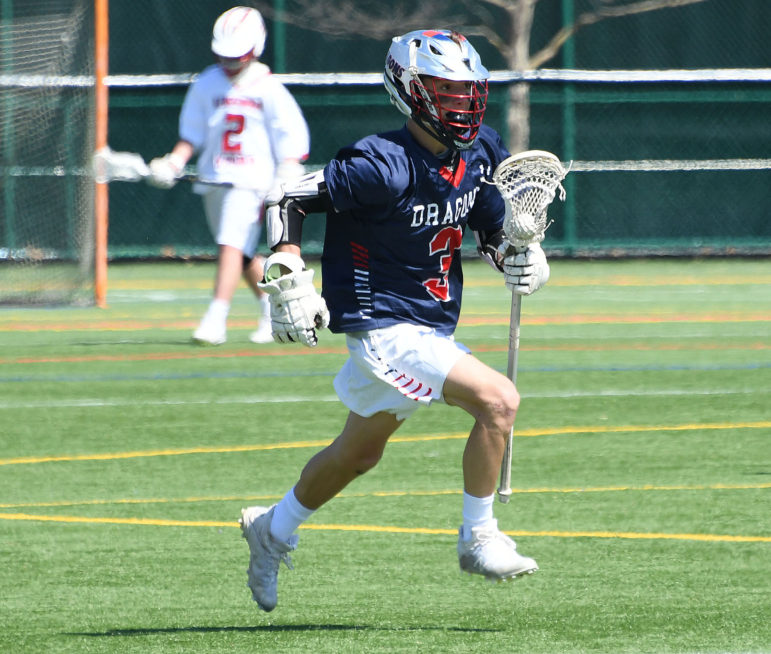 GFA boys lacrosse player Will Magrone of Darien runs up the field.

Benson and Will Magrone (Darien) had two assists each while Liston, Mcdonald, Pilkington and Murphy all had assists.

Benson scored three goals and Grills made 13 saves to lead GFA past St. Luke’s by an 8-6 score.

Mcdonald, Murphy, Pilkington, Magrone and Max Yates (Fairfield) all had single goals while Zach Liston had one assist for GFA, which improved to 5-1.

Ryan Boyle (Southport) teamed up with Lane Durkin (Darien) to win 9-7 at first doubles and also earned a win at No. 2 singles by an 8-3 score.

Dasha Timasheva (Greenwich) won 8-3 at singles as did Allie Agnew by a 8-6 score.

The Dragons made the trip to SUNY-Purchase and swept the day to post a 7-0 win over Holy Child.

Sean Hogan (Westport) was 2-for-3 with two doubles and scored a run, but the Dragons fell by a 3-2 score to Hamden Hall at home on Saturday.

Hogan also had five strikeouts in six innings of work on the mound.

Earlier in the week, GFA was beaten by Hopkins by an 11-0 score.

The Dragons made the trip to Canterbury and swept their hosts by a 7-0 score.

The Dragons fell at home to Cheshire Academy by a 5-2 score.

In doubles, Aidan Helfant (Westport) and Timashev took a 8-0 win.

The Dragons hosted Brunswick on Wednesday, falling by a 5-2 score.

Two victories in doubles play gave the Dragons their points.

The GFA Ultimate Frisbee team placed second in their own invitational tournament in a weekend filled with spirited competition and good sportsmanship.

In its first game, GFA raced out to a 7-0 halftime lead en route to an 11-5 win over Chase Collegiate.

In the second game, against Amity, the Dragons battled tough and went overtime to eke out a 7-6 win.

In the championship game, against team whose roster ran 30 players deep, the Dragons fell in the end in a thrilling 13-11 loss to Fairfield Tribe.

The Dragons only gave up four earned runs in the game before falling to St. Luke’s on the road.

The Dragons made two road trips for meets last week.

The Dragons posted a 7-2 win over King on Wednesday.

The Dragons battled tougher than the final score indicated in a home loss to Rye Country Day School on Thursday.

Charlotte Wagner (Southport) took her match into the final hole while Clare Foley (Southport) and Sanskriti Kumar (Stamford) battled down to the final two holes before falling in match play format.