In honor of Veterans Day, the Darien Public Schools hosted a variety of assemblies and gatherings for students last week. The following is a snapshot of efforts to honor those who answered the call of duty. 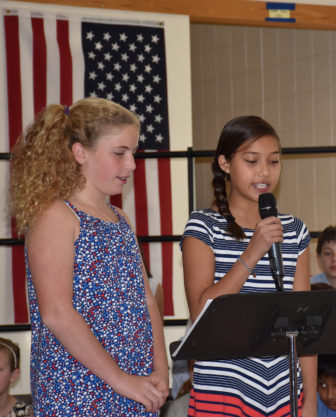 Over 30 veterans attended the 12th Hindley Veterans Day Share. Fourth and fifth grade students kept the school in a patriotic mood with songs like, “The Star Spangled Banner” and “God Bless America.”  The question and answer portion of the assembly was informative.

“Veterans answered the students’ questions with facts and stories that complimented their learning about this special day,” said Principal DJ Colella. “George Hawes got right to the point as he explained the sword he brought with him and why Marines were originally given swords.” 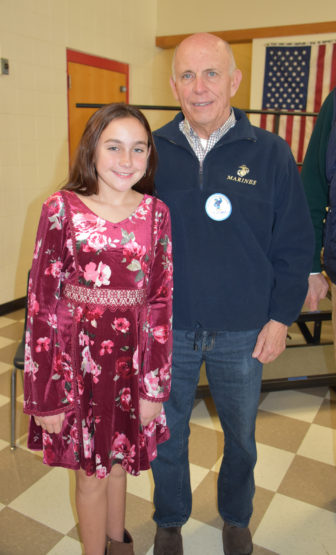 At Holmes School, Savanna Moore poses with her grandfather, Thomas Moore (a Marine), after the flag ceremony.

The school welcomed 20 veterans who were honored for their service and sacrifice. The fifth grade presented a patriotic show that included songs and personalized student readings about veterans. There was also a flag ceremony.

“What is very special about our Veterans Day Share is that our children are not simply performing,” said Principal Paula Bleakley.  “The songs they sing, the poems they write, and the letters they draft capture their true understanding of the impact veterans have had on our country.”

The PTO collaborated with teachers and families to organize the day to both honor military members and serve as a unique, inter-generational learning experience for  students.

“This year, we were pleased to welcome a range of Veterans who served from World War II all the way through the ‘War on Terror,’” said Principal Luke Forshaw. “Our diverse body of veterans had time to speak directly to student questions, hear our chorus perform patriotic songs and connect with one another during our reception.

“Ox Ridge also honored Phil Kraft, who has been a regular at the Ox Ridge celebration and is a leader in the Darien veterans community.”

The school shared the day with 10 veterans in a special ceremony, which included the Pledge of Allegiance and performances by the Royle Minstrels. 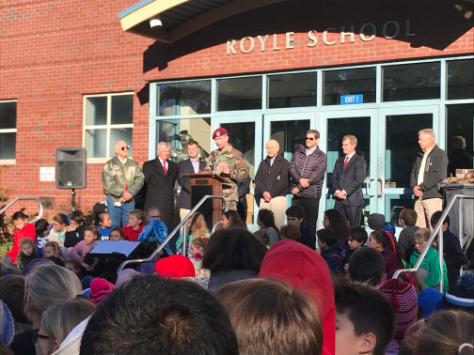 Veterans and students at Royle School.

Among the invitees were:  Master Sergeant Brian Hynes, U.S. Army; Ted Huffman, who served as a lieutenant in the U.S. Navy as a surface Warfare officer; Michael Aldrich, U.S. Army; and Charles Rose, U.S. Navy.

The school hosted two assemblies that focused on the history of Veterans Day. Students in classrooms celebrated by writing thank you notes and creating a Wall of Heroes. The front of the building was filled with American flags created by students to honor veterans. 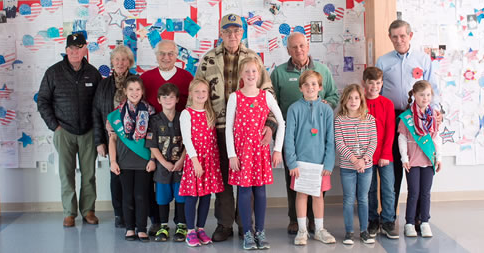 Veterans and students at the Tokeneke School Veterans Day observance.

Sixth grade students created posters of veterans that told about the person’s life and what they learned from their service.  Seventh grade Social Studies classes watched Taking Chance, a 2009 movie about a soldier accompanying the remains of an Iraq War Veteran.

Eighth grade students attended an assembly, which featured the Camerata Singers, a student color guard, and student readings on why they were proud to be an American.  Two veterans then shared their service experience.

Capt. Clay Canning served six years in the Army infantry. He served in Georgia, Alaska, South Korea, and Afghanistan. Captain Sueann Schorr served for five years in the U.S. Navy and is still active in the reserves.  Her time in the Navy has taken her all of the world, according to Keith Keeler, director of 6-12 Social Studies.

Veterans shadowed students in classrooms and also presented in the auditorium. A few even Skyped in to share their insights and service during the day.

Also: Cameron J. Davis, U.S. Air Force medic who is stationed at Langley Air Force Base in Virginia;  Chris Collins, a 1993 DHS graduate, who is a transitioning Marine F/A-18 Pilot left wing and Slot pilot for the Blue Angels; Kevin Nicholas, DHS grandparent and Vietnam veteran, who presented with with Peggy Minnis, whose brother also served in Vietnam.

— Marc Marin is district director of instructional technology. This article is republished from the Darien Public Schools News of the Week newsletter. As noted, some pictures were provided by the Holmes and Royle school publicity committees, along with their captions.