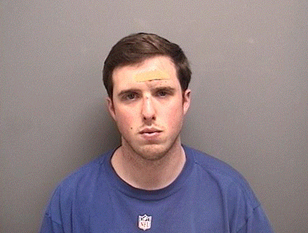 A Darien man, 25, has been selling heroin in town, and after Darien detectives obtained an arrest warrant for him this week, they found he was about to sell more on Saturday and arrested him, police said.

(Editor’s note: This article has been updated at the bottom.)

Police gave this account of the matter (including accusations not proven in court):

The man, Kevin Grant of Shady Acres Road, was found when police put under surveillance an area where the sale was going to take place. Soon after 7 p.m., they saw Grant drive up and arrested him.

Grant suffered minor injuries in the arrest and was treated by Darien EMS-Post 53. Police also found three bags of heroin during the incident. After the arrest, a Stamford police dog, Maverick, searched the car Grant was driving, although police didn’t say the dog found anything illegal.

Grant was charged with possession of narcotics and two counts of sale of narcotics. His bond was set at $250,000, which he hadn’t posted as of late Saturday night.

Grant previously was arrested in Darien and Norwalk in 2010 and 2011. (Where no news article is cited below, information comes from the Connecticut Judicial Branch website.)

Grant pleaded guilty in each of the incidents below on April 3, 2012 and was sentenced to five years in prison, execution suspended, and three years of probation, according to the Judicial Branch website.

In August 2010, Grant, then a 20-year-old Norwalk resident, set a car on fire in a driveway on Shady Acres Road and damaged a mailbox, according to a report by Darien Patch.

Grant was arrested after Darien police accused him of kicking a closet door, damaging it, at his parents’ home on Oct. 20, 2010, according to a Darien News report. He was issued a standard order not to threaten or assault family members. According to the same news report, also relying on Darien police accusations, Grant got into another domestic dispute the next day, violating the protection order issued the day before. He was arrested on a warrant that night.

On Dec. 12, 2010, Grant was charged by Norwalk police with felony drug possession on the previous Nov. 8.

One thought on “Darien Man Charged with Selling Heroin [Updated]”