An 18-year-old Darien man arrested on Monday was selling marijuana and THC (the active ingredient of marijuana) to teenagers and adults in town, Darien police said.

John “Jack” Read of Shady Acres Road had marijuana and other contraband with a police-estimated street value of $6,500 in his home when police searched it, along with unspecified “quantities of LSD,” police said.

[Update:] Read is the second person from the same address, 20 Shady Acres Road, charged with selling illegal drugs. In May 2015, Kevin Grant, then 25, was charged by Darien police with possession of narcotics and two counts of selling of narcotics.

Police applied for and obtained a warrant to search Read’s home. The search took place Monday, Jan. 29. The THC/oil mixtures were meant to be consumed with vaporizor devices, which read was also selling.

A total of $400 in counterfeit $20 bills were also found in the house.

Editor’s note [updated]: Jack Read’s photos, previously posted online here, publicly on Instagram, have been either removed or made private. They showed him and friends drinking from bottles and cans, and with some of those pictures sporting Instagram “likes” from more than a hundred people.

Police obtained an arrest warrant, located Read and arrested him the same day on charges of two counts of possession of a hallucinogen, sale of marijuana or other controlled substance, operating a drug factory, and two counts of first-degree forgery.

He later posted a $50,000 bond, and he is scheduled to appear Feb. 9 in state Superior Court in Stamford.

“This investigation is ongoing and therefore no further information will be released,” the Darien police announcement of the arrest stated.

“In an effort to keep parents informed, we are providing a picture of various types of vaporizing devices. These devices are intended to use vaporizing “juices” or oils, but can be altered to ingest THC (active ingredient in marijuana) laced/flavored oils.

“These devices are difficult to identify as they often look like USB drives and/or computer components. It’s also difficult to detect their use as they don’t produce the smoke and odor associated with smoking of marijuana.

“The devices often give off the scent of the flavored oil when being used. We encourage parents to educate themselves about vaporizers so as to be able to identify them and understand their uses.”

“These are only a small sampling of what a vaporizing device can look like. If anyone has any questions in regards to the identification and use of vaporizing devices, please don’t hesitate to call the Darien Police for assistance. We are here to support parents prior to an issue rising to the level of a law enforcement incident.” 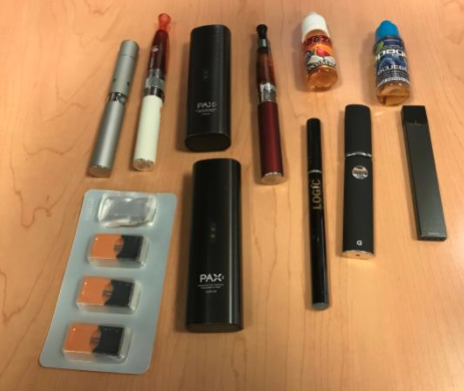 Examples of vapor devices not associated with this case.