Consultants hired by the town to evaluate Darien EMS-Post 53 say the ambulance service shouldn’t be waiting for fire trucks before getting to the scenes of Interstate 95 medical emergencies.

The Illinois-based McGrath Consulting Group is on the agenda for Monday night’s 7 p.m. Board of Selectmen meeting, where the consultants will officially present the report (full text here) to selectmen. Darien TV79 plans to show the meeting on Cablevision Channel 79 and on the Internet.

Right now, Darien EMS-Post 53 has a policy that ambulances will wait on highway on-ramps for fire trucks to get to emergency scenes first, according to the report (all quotes in this article are from page 49 of the report).

The Director of Post 53 [Ron Hammer] was adamant that no member would be required to respond onto Interstate 95 until the fire department arrived first to provide additional protection from traffic; as stated in their operational protocols.

That policy hasn’t been sitting well with state police, the agency that patrols highways and normally gets to the scene first, according to the report.

The consultants were told by the police chief [Duane Lovello] that he has received complaints from the state police about the delay (ambulance stands-by (stage) on the entry ramp) until the fire department arrives.

While that policy may protect Darien high school students and adults, by delaying service it creates a “potential damage to the patient,” the report pointedly states.

The consultants were told that Post 53 provides superior patient treatment regardless of the age of the individuals providing that treatment. Therefore, every effort should be made to reach the patient in the most-timely and safe manner, which should reexamine the need to wait for fire apparatus.

The emergency providers’ safety is of the upmost concern for everyone and all steps to maximize their safety on the emergency scene should be a top concern, but not at the potential damage to the patient. 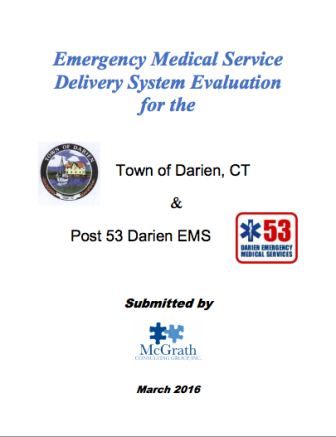 EMTs can be adequately protected from oncoming traffic if the ambulance is parked in front of an accident scene, with state police vehicles located behind the scene, according to the report. In addition, Darien EMS-Post 53 can make it a policy to “have one ambulance member focus on oncoming traffic while the other members render aid.”

The practice of Darien ambulances waiting at on-ramps is called “staging” or “stage time.” The report notes that last November there were two incidents in which it took 18 minutes, 26 seconds for Darien EMS-Post 53 to respond to a highway call and 15 minutes, 36 seconds to respond to another one. “One incident was noted as a 10-minute stage time awaiting fire [vehicles].”

Any director/chief of an ambulance service is not paid to take risks especially with personnel; rather, they are paid to know what risks to take.

In most cases, a minimum of one police vehicle is on the scene by the time Post 53 would arrive. Therefore, that police officer is trained to know how to position their vehicle to add maximum safety to the accident victims and themselves.

Getting safely to the patient as quickly as possible is the premise of why emergency vehicles respond with lights and sirens.