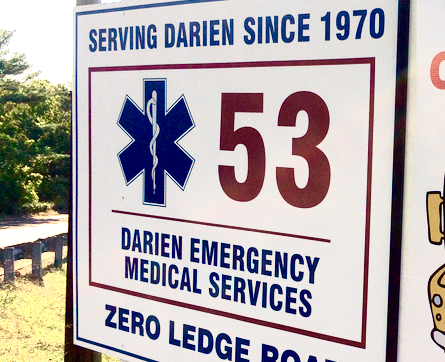 Darien EMS-Post 53 ambulances could get to medical emergencies in Darien quicker if the town made changes in the way it handles 911 calls, according to consultants hired by the town. 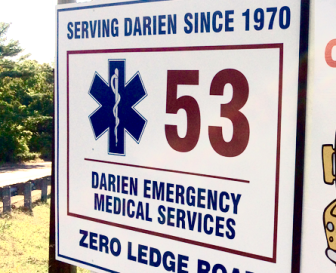 The “McGrath Report” posted on the town website Friday from the McGrath Consulting Group, based in Illinois, looked into how Darien provides emergency medical services and made various recommendations for improvements. Much of the report delved into whether paramedics should be based within the town (the consultants recommended it).

The second-most emphatic recommendation in the report was that Darien should change the way it handles 911 calls for medical emergencies in order to cut down the time it takes to dispatch Darien EMS-Post 53 to them.

The consultants want dispatcher based in the Darien Police Headquarters building to immediately mute the phone and transfer emergency 911 callers to the Bridgeport-based “C-Med” dispatching service that the town uses.

Then they want the Darien dispatcher to continue to listen in on the call so that dispatcher can send Darien police officers to the scene. That would save significant time in getting reports to Darien EMS-Post 53, the consultants said.

You can read the entire 79-page McGrath Report here.

(Other recommendations in the report: That ambulances quit the practice of delaying getting on highway injury scenes until fire trucks can be positioned to protect them; that Post 53 make changes to its vehicle-replacement schedule and handle vehicle maintenance records in a different way; that the organization improve the way it handles billing.)

Currently, when someone calls 911 in Darien, a dispatcher at the police station handles the call. (The department is in the process of hiring and training one civilian dispatcher; otherwise, a uniformed Darien police officer will answer the call and will continue to do it whenever the future civilian dispatcher is not working; Darien has 26 officers qualified for dispatching duty).

The dispatcher has a protocol of various questions to get information from the caller quickly to determine the nature of the emergency. If the emergency is medical, the call is transferred to the Southwestern Regional Communications Center in Bridgeport (called “C-Med” in the report), a dispatching service that covers a number of the communities in the area.

According to the report (page 38;”PSAP” is essentially a term for 911 dispatching office):

Darien contracts with C-Med for dispatching in part due to the staffing of their PSAP and meeting the requirements of Connecticut General Assembly – GCS 28-25b that requires the PSAP to have the ability to provide emergency medical dispatching (EMD) which provides medical instructions to the caller. Darien PSAP often does not have sufficient dispatchers on duty to ensure that emergency call taking, unit dispatching, and EMD can be performed.

C-Med (which has 14 full-time and 9 part-time dispatchers working for it), then takes the call and gets the essential information to pass on to the ambulance service. If necessary, the dispatcher can provide emergency medical instructions to a caller. (Darien dispatchers, while trained to also provide these instructions, have enough other responsibilities and such limited staffing that the town contracted with C-Med.)

These individuals [police officers] respond with a limited amount of medical equipment which includes an Automatic External Defibrillator (AED), a device that automatically analyzes the heart rhythm and if the AED detects a problem that may respond to an electrical shock to restore a normal heart rhythm, the AED will administer that life-saving intervention.

It takes Darien dispatchers an average of 3 minutes, 45 seconds to answer a 911 call and dispatch a police officer to the scene of a medical emergency. But before police officers are dispatched, the call is usually transferred to C-Med — on average, 55 seconds after the call to 911 is made. It then takes C-Med another minute and 45 seconds to dispatch Darien EMS-Post 53.

“These times can and should be improved through a policy change,” the report states (page 43), and the report goes on to say (pages 43-44):

In the past, the consultants were told (page 44), Darien tried the practice they’re recommending, “but background noise made it too difficult to obtain the needed information.” (It wasn’t clear from the report exactly what the problem was and between which of the three parties — caller, Darien dispatcher or C-Med dispatcher.)

In addition to the length of time it takes to dispatch Darien EMS-Post 53, there’s a problem with all the things that a Darien dispatcher is expected to do, according to the report (page 39):

Although the Darien PSAP has individuals certified in emergency medical dispatching (providing life-saving medical instructions to the caller prior arrival of the EMR), it is not feasible for a single dispatcher to disregard all of the other tasks needed to dispatch the emergency provider, to remain on the phone with the caller to give pre-arrival instructions, dispatch appropriate units, notify C-Med, provide a pre-alert to Post 53, and handle other emergency traffic.

The McGrath report doesn’t mention it, but state officials have proposed consolidating dispatching services for towns in Connecticut. It is unclear to what extent or how that would happen, or when, if it does happen.

McGrath Consulting Group is on the agenda for the Board of Selectmen’s 7 p.m. meeting on Monday, which Darien TV79 has said it will cover live, through its Channel 79 service on Cablevision and its livestreaming service online.

2 thoughts on “Consultant: Darien Should Streamline Dispatching for Medical Emergencies”