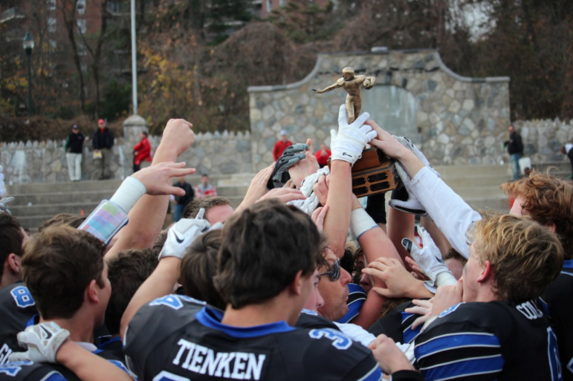 Leave it to the career state record holder to leave his mark when it counted the most.

With Darien leading New Canaan 28-21 in the waning minutes of the fourth quarter of the 2015 FCIAC Championship at Stamford’s Boyle Stadium, Darien defensive end Mark Evanchick dropped Rams quarterback Michael Collins for his first sack of the game, forcing a turnover on downs and all but clinching the conference title for the Blue Wave.

The Rams would get one more shot to tie the game, but a New Canaan fumble was recovered by Darien at midfield with 1:08 left in the game, sealing the championship for the Wave.

It was the second consecutive year the Blue Wave topped the Rams for the FCIAC title, having won last year’s contest by the same 28-21 score. It was also Darien’s fourth straight Turkey Bowl win, as New Canaan has not won the annual Thanksgiving Day matchup since 2011.

“We hadn’t really been tested, but we were tested today,” Darien head coach Rob Trifone told NewCanaanite.com. “New Canaan is a great football team and coach Marinelli is a great coach, so we were just fortunate enough to come out on the luck end of the stick today.”

Darien was led by senior quarterback Timmy Graham, who completed 32 of 45 passes for 441 yards and four touchdowns. Graham torched New Canaan’s secondary on what would prove to be the game winning scoring drive, completing passes of 38 and 42 yards—the latter of which came on a second-and-33—and capped off with an 8 yard strike to senior Hudson Hamill in the back of the end zone on third-and-5 that broke a 21-21 tie with 4:41 left in the game.

Meanwhile, despite New Canaan star offensive lineman Lucas Niang’s ability to hold Evanchick in check for most of the game, the rest of Darien’s defense was able to contain the Rams’ high-octane offense throughout the contest.

The Wave’s secondary forced several incompletions with tight coverage from Hamill, Bobby Trifone and Christian Trifone, while players like Cord Fox and Quinn Fey were able to put consistent pressure on Collins.

“That’s what good teams do,” New Canaan head coach Lou Marinelli said. “Good teams find a way to stay alive and that’s what they did. They’re a good team. They beat us.”

The game started off well for New Canaan as the Rams forced Darien to a three-and-out on the opening drive. New Canaan’s Thomas Williams blocked the ensuing punt, setting the Rams up at the Wave 14-yard line.

Three plays later New Canaan was in the end zone as Collins ran it in from five yards out on a QB keeper for a 7-0 Rams lead with 9:30 left in the first.

Darien would answer immediately with a 10-play, 80-yard drive, highlighted by a key fouth-and-1 conversion and capped off by a 29-yard Graham-to Hamill hookup along the right sideline to tie the game at 7 with 5:52 left in the quarter.

Both defenses would step on the next two series, as Evanchick recovered a New Canaan fumble to set the Wave up at the Rams 47.

Darien drove down to the New Canaan four-yard line, but a Graham pass was picked off in the end zone by New Canaan’s Ryan O’Connell, preserving the tie as the game moved to the second quarter.

After Darien’s defense forced a New Canaan three-and-out, Graham hit senior wideout Colin Minicus in stride along the left sideline for a 39-yard touchdown for a 14-7 lead with 11:18 to go in the half. Minicus would go on to have a huge day for the Blue Wave, hauling in 10 passes for 169 yards.

After forcing a Darien turnover on downs at the New Canaan 25, the Rams mounted their first sustained drive of the game. A series of short passes from Collins to senior Kyle Smith, who had a team-high nine catches for 95 yards, Peter Swindell, Andrew Jahns and Andrew DeFranco set New Canaan up at the Wave 18. From there, Collins hit a wide-open Jahns in the end zone for a touchdown, knotting the game at 14 with 1:52 to go in the half.

The third quarter looked like it would be a game of field position, and after two consecutive Peter Swindell punts pinned Darien deep in their own territory, it looked as though the momentum was swinging the Rams’ way.

Darien would come up with the big play once again however, as on third-and-10 from the 11-yard line Graham floated a pass over the middle to Rock Stewart who ran untouched to midfield for a 40-yard gain. Eight plays later Graham would connect with Stewart again, this time for a 28-yard touchdown on second-and-24 and a 21-14 Wave lead with 3:21 left in the third.

Despite giving up what seemed to be a backbreaking 89-yard scoring drive, the New Canaan offense would respond. Behind the solid running of senior Matt Cognetta, and quick, short passes by Collins to Smith, New Canaan drove 70 yards in eight plays to the Blue Wave 1-yard line. On fourth-and-goal, Andrew DeFranco muscled his way into the end zone, tying the game at 21-21 with 1:06 left in the third.

New Canaan seemed to have seized control of the game on the ensuing Darien possession as senior co-captain Mike Cognetta picked Graham off at midfield and returned it to the Wave 33.

The Rams could only advance as far as the 29, setting up a 46-yard Swindell field goal attempt. Swindell’s kick, however, hooked wide left and the Wave took over at their own 20 with 8:39 left to play, setting up the eventual game-winning drive.

Graham was able to find some soft spots in the middle of New Canaan’s secondary, hitting Hamill for 38 yards and Minicus for 42 to set up a first-and-10 for the Wave at the New Canaan 13.

Three plays later Graham lofted a pass to the back of the end zone that appeared to be headed out of bounds. Hamill, however, did his best Dwight Clark impression, leaping high in the air and landing just inside the end zone for the touchdown and a 28-21 lead.

New Canaan would take the ensuing possession to midfield, getting as far as its own 46-yard line. Three consecutive incompletions would set up fourth-and-10, when Evanchick finally broke through for his first sack of the game, and perhaps the most important sack of his career.

The Rams (9-1) will next try to rebound and defend their back-to-back state championships as the No. 6 seed. They will travel to Windsor to take on the No. 3 Warriors (10-0) in the first round of the Class L playoffs. Windsor is also defending a state title, having won the Class L-Small championship last season.