Police described what happened with this account (except as noted), including accusations not proven in court:

On Aug. 19, Brent Moyer, now a Stamford resident, texted the minor child of a Darien woman. The no-contact order forbade him from doing so without going through the child’s mother, who reported the incident to police on Aug. 26.

The child, when questioned, said the text was about plans to go play soccer together.

Five months previously, at 2:40 a.m. on March 20, Darien police were called to a home on Lake Drive in Darien, then Moyers’ residence, on the report of a domestic disturbance. Police were told Moyers grabbed and elbowed the victim at the home after getting into an argument with that person. 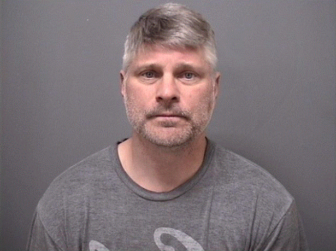 April 1 arrest photo of Brent Moyers, then 50, charged with violating a protective order.

As Darienite.com previously reported: “The man denied he was in physical contact with the victim during what he described as a minor altercation. A Darien EMS-Post 53 ambulance was called and the victim was treated for minor injuries that police didn’t describe in the announcement.”

Moyers was charged with disorderly conduct and was issued a standard no-contact order that day and appeared in court. (In Connecticut, the standard procedure for police is to issue the no-contact order and for a court to review it at the first court hearing, usually confirming the order, possibly with changes, before a defendant is released.)

Police later arrested Moyers on a warrant charging him with violation of a protective order. He was released after posting a $10,000 bond.

For the latest incident, police applied for and received an arrest warrant. On Sept. 3, Moyers turned himself in at Darien Police Headquarters, where he again was arrested on a charge of violation of a protective order.

According to the Connecticut Judicial Branch website, both the previous and the most recent charges of violation of a protective order are felonies; the disorderly conduct charge is a misdemeanor.

Moyers was released on a promise to appear the next day in state Superior Court in Stamford. His next appearance on the charge was scheduled for today, Thursday, Sept. 10, according to the website.