Pulitzer Prize winning historian Gordon S. Wood, known as the “great historian of the American Revolution,” will discuss “Friends Divided: John Adams and Thomas Jefferson” at the Mather Homestead in Darien on April 24. 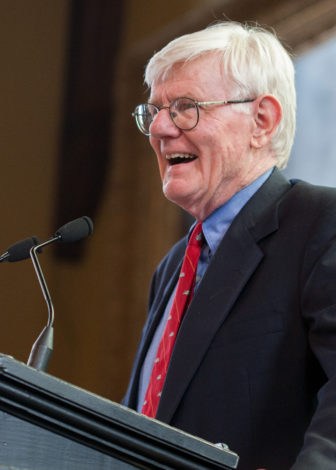 Gordon Wood, an award-winning historian specializing in the American Revolution, at Brown University (2006)

The event, part of the Mather Homestead’s Scholars Lecture Series, takes place at 6:30 p.m., Wednesday, April 24 with wine and cheese at the homestead followed by the lecture.

He is the Alva O. Way University Professor Emeritus at Brown University and the recipient of the 1993 Pulitzer Prize for History for his book, The Radicalism of the American Revolution.

His book, The Creation of the American Republic, 1776-1787, won a 1970 Bancroft Prize, and his 2017 book, Friends Divided: John Adams and Thomas Jefferson, the evening’s topic, was names a New York Times Book Review Notable Book of 2017.

“We are thrilled to have such a distinguished scholar on American history at the Mather Homestead. An important part of the Mather mission is to educate our community on 18th century history, something that is being lost in current educational curriculums and communities,” said Mia Mitchell-Cortellesi, Mather Homestead Foundation board member and chairperson of the Scholars Lecture Series.

About the Mather Homestead

The Mather Homestead is known for its important role during the Revolutionary War raids and also as the home of Stephen Tyng Mather, the founder and first Director of the National Park Service.