We all know what happened when Boston decided to bury its downtown elevated interstate highway, known as the Central Artery. What was intended to be a seven-year, $2.6 billion project ended up taking a decade and costing $14.6 billion.

Head’s up: New York’s Metropolitan Transportation Authority — the parent company of Metro-North — has similar designs for our beloved Grand Central. Nicknamed the East Side Access project, the goal is to bring some Long Island Rail Road trains into Grand Central. 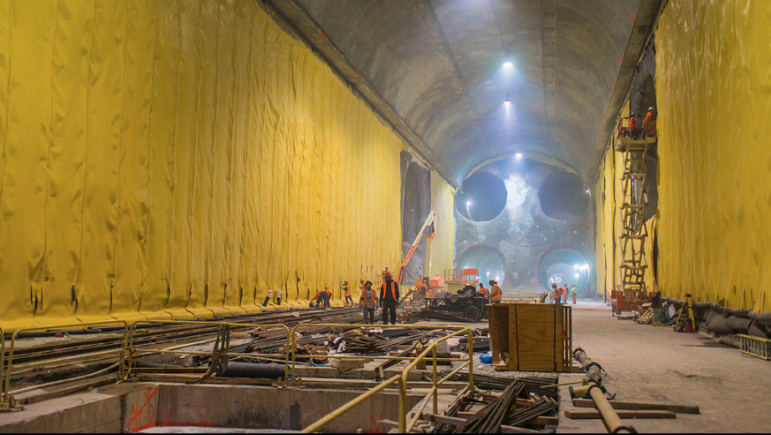 Progress on the Grand Central Terminal side of the East Side Access Project as of Jan.13, 2014.

The plan would use the lower level of the already built 63rd Street subway tunnel, allowing some LIRR trains from Queens to enter Manhattan and then follow a new, very deep tunnel under existing Metro-North tracks beneath Park Avenue.

Trains would terminate 14 stories under Grand Central on eight tracks with up to 24 trains arriving per hour. Exiting passengers — an estimated 162,000 per day (compared with the 115,000 who arrive and depart at GCT from Connecticut — would be whisked upward on high-speed escalators, into an underground concourse complex stretching from 43rd to 48th streets beneath Vanderbilt Avenue.

A few years ago, I donned boots and a hard hat and surveyed the construction. It was so massive, it looked like something out of a James Bond movie.

The cost has already ballooned from $3.5 billion to $11 billion in a project rife with corruption. In 2010, the MTA discovered it was paying 200 workers $1,000 a day each with no assigned duties.

This year, we learned that relatives of high-ranking union officials were being paid $42 an hour (plus $23 in benefits) to deliver coffee to the workers. Construction analysts say it costs four times as much in New York City to build projects like these compared to Asian and European jobs.

The East Side Access project will give LIRR riders better access to midtown. But is today’s subway ride connection from Penn Station to GCT really all that bad? Imagine what we could do with $11 billion to improve commuter rail service in the tri-state region.

Another concern is what will doubling the number of passengers in GCT mean for Connecticut commuters? If you think the station is crowded now, just wait until this project is complete.

GCT would quickly be maxed out for trains and platforms, making much-needed expansion of train service to Connecticut a real problem.

Diverting LIRR trains into GCT should open “slots” in Penn Station for some Metro-North trains, which would travel there by way of the Hell Gate Bridge. But don’t count on it, considering New Jersey Transit, Amtrak and LIRR will also be vying for Penn Station access.

If all of this concerns you, don’t get your knickers in a knot. There’s nothing you can do to stop it. The money’s already been appropriated and the project should be finished in 2022.

What role did Connecticut play in this boondoggle? Zero. New York’s MTA didn’t ask our opinion or seek our approval. Connecticut commuters pay the bills and New York’s MTA calls the tune, building a really “big dig” that benefits Long Island, but penalizes us. What’s wrong with this picture?