Byron Jack Dugdale, age 94, died peacefully at his home in Darien on Sept. 21. 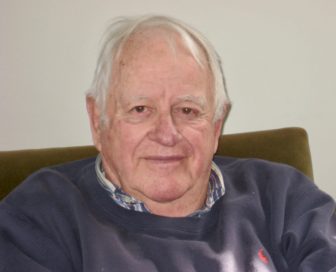 He was born in Stamford and lived in Noroton Heights, as did his father, Jack and grandfather, William.

He graduated from Darien High School, Class of 1944.

He joined the Navy during World War II, serving onboard the troop carrier, USS General W.A. Mann, and working as a radio operator on Kodiak Island, Alaska.

Byron worked for his father at Jack Dugdale’s Menswear (est. 1921), on Main Street in Stamford and later became the owner of Dugdale’s Menswear. After retiring in 1982, following his passion for fishing, he moved to Nantucket Island for seven months of the year for over 30 years.

Byron was a long-time member of the Horseless Carriage Club, the Darien Boat Club and the Nantucket Historical Association. Over the years, he also enjoyed photography, collecting antique cars, hunting and spending time in the summer and fall with his family on Nantucket.

He is survived by his wife of 68 years, Lois Lincoln Dugdale; his daughters: Mary Danskin and Anne Gordon (husband Ken) of New Jersey. He is predeceased by sons William (1970) and John (May, 2019). He is also survived by five grandchildren.

Donations in Byron’s memory may be made to At Home in Darien, 2 Renshaw Road, Darien, CT 08620.