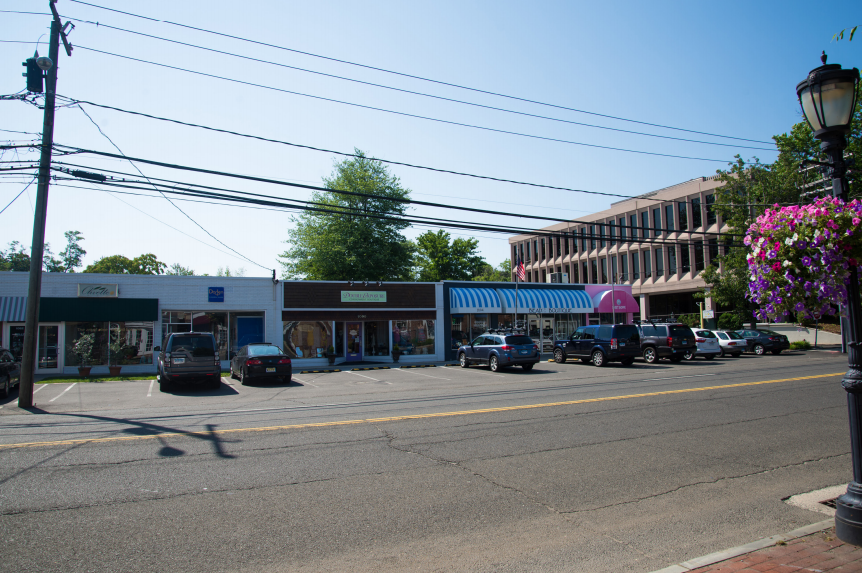 Where the half-acre "Market Green" would go in the Corbin/Post Road proposed redevelopment. (picture from Baywater Corbin LLC)

Some of the support for the massive downtown Darien redevelopment proposal between Corbin Drive, the Post Road and the highway is coming from businesspeople who worry that the downtown businesses district, for whatever reason, may be losing its competitive edge. 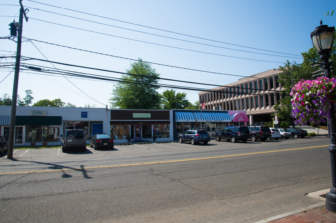 BEFORE (currently): Where the half-acre “Market Green” would go in the Corbin/Post Road proposed redevelopment. (picture from Baywater Corbin LLC)

Whether it’s retail shopping now going on over the Internet or business going to downtown shops in other towns, some business owners told the Planning & Zoning Commission that they’re worried.

The P&Z held a public hearing Tuesday on the zoning changes wanted by Baywater Corbin LLC, a partnership of the owners of Baywater Properties and RG Properties.

Although the hearing was specifically about particular zoning changes being proposed for the site, the P&Z after a while seemed to give up on the idea of holding speakers to the topic at hand and let them speak in more general terms about their support for the proposed redevelopment. 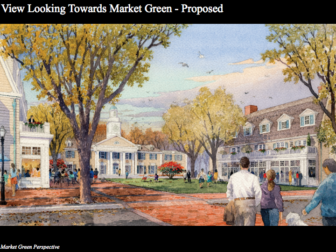 AFTER? The proposed “Market Green,” from the same perspective as the picture just above. (image from Baywater Corbin LLC)

Baywater Corbin launched an effort to get supporters of its proposal to the P&Z hearing, with advertising and emails, and interns from Baywater Properties even handed out blue baseball caps with the logo from the Baywater website, YourDowntownDarien.com, for attendees to show their support.

The owners of two stores that rent space from Baywater Properties and the director of the Chamber of Commerce said they strongly supported the proposal because they think it will boost the retail sales environment downtown. 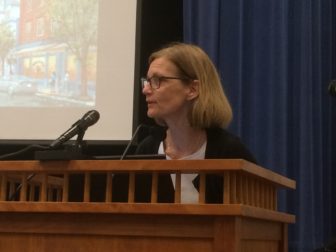 Susan Cator, director of the Darien Chamber of Commerce, speaks to the Planning & Zoning Commission.

“Shoppers want an experience,” Chamber of Commerce Director Susan Cator said. “We can get everything we want on the Internet. Why do we want to go into a shop? Because we want the experience. We want to interact.”

During the meeting, Genovese made many of the same points in his prepared comments but in a more conversational tone, saying: 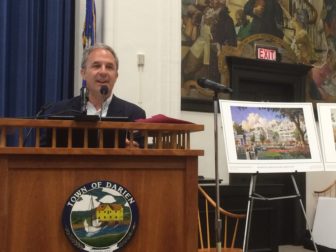 “I want to be up-front — there are a lot of vacancies in downtown Darien right now. Something is not working quite right. The Internet has had a profound impact on retail business and has taken a lot of business away from existing retailers.

“Some of the new retailers and some of the old retailers are re-inventing themselves and learning how to use the Internet to capture sales, but what we fundamentally need to do is get critical mass with locally known boutique stores and strengthen their ability to present themselves to their customers. We believe that this project will do that.

“And with the 66 apartments we’ve proposed and additional office space, you’ll have a captive audience that can support restaurants and other businesses in town.” 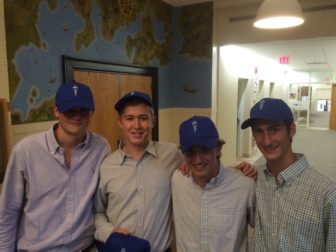 Interns were giving out these baseball caps in Blue Wave blue with the lantern logo of Baywater Corbin’s YourDowntownDarien.com in the front and the website address in the back.

Genovese said that the project should generate enough revenue for the development company that it will be able to keep rent lower for the unique, locally owned stores of a kind now located on the site.

That would give downtown Darien a competitive advantage with other downtown shopping areas, like those in Greenwich, New Canaan, Westport, Norwalk and Stamford, where national retail chain stores dominate, he said. 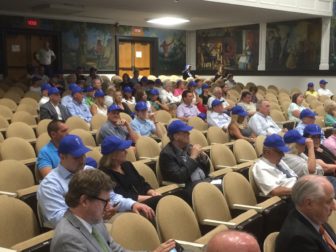 Erica Jensen, owner of the Helen Ainson clothing store on the Post Road, a tenant in one of Baywater’s buildings, said that “Over the past several years, I’ve noticed a greatly reduced foot traffic in town, and I feel that possibly could be because of increased internet shopping.”

She said the Corbin Baywater proposal would likely bring back foot traffic. “I think that both David and [his father] Rocky Genovese have the best interests of the town at heart,” she added. “They’ve been very considerate to my business over the year’s when I’ve had special needs and requests.”

The inclusion of a large underground parking garage on the site, will also help, she said. When Jensen worked in downtown Greenwich, she said, customers who gave up on trying to find downtown parking would call to ask whether the store had particular kinds of dresses rather than come in and see them.

Walter Casey cited the Internet-retail trend to make the opposite point: “I think the country is over retail. I think locally we’re over retail. Essentially we’re going to add capacity — and that’s a very dangerous thing.”

Planning Commission Vice Chairman Steven Olvany pointed out to Casey that the additional retail space in the proposal wasn’t very large — about 15,000 square feet. (The project would add both condominium apartments and more office space downtown.)

John Vaccaro, a Rings End Road resident with a career in real estate finance said the Baywater Corbin proposal broadly follows a concept that’s been successful in many places across the country, including San Francisco, Santa Monica, Ca. and in Florida.

“The trend we’re seeing across the U.S. is this live/work/play concept that David and his group are trying to do in Darien. […] It’s not a new concept,” he said. “What people want to do is live and work closely together” without having to use their cars to go from place to place.

Other communities are using this concept to create neighborhoods that compete for shoppers and real estate buyers from elsewhere, he said, citing the whole west side of Manhattan and New Rochelle as competitors. “The town needs to remain competitive,” he added. “In order to be competitive, you have to do something like this.” 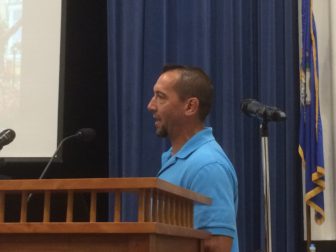 A downtown that doesn’t compete, he said, “is going to get hollowed out. We have a dead mall in Stamford, and that’s going to continue.”

John Ruddy of 63 Old Kings Highway South said that when he and his family want to make a day of shopping and going to a restaurant, they head for downtown New Canaan.

Before the public hearing period closes, anyone is invited to tell the Planning & Zoning Commission what they think of the proposed zoning change either by attending the next scheduled hearing date, Tuesday, July 12, at the Town Hall Auditorium, or by emailing Planning & Zoning Director Jeremy Ginsberg at jginsberg@darienct.gov.

You can find out more about Baywater Corbin LLC’s proposal at its website: YourDowntownDarien.com.

One thought on “Business Owners Give Support for Downtown Redevelopment Plan, Say Darien Needs to Compete”