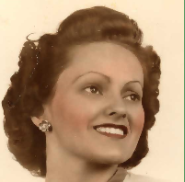 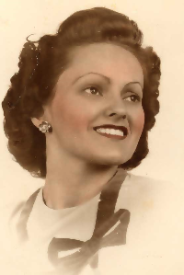 She was born in New Haven Feb. 25th, 1925, the daughter of Bartholomew and Germaine Daly. She is predeceased by her husband, Gerald whom she married on Nov. 12, 1955, at St. John Roman Catholic Church in Noroton.

Annette is survived by a daughter, Germaine, and son-in-law, Michael of Groton; a son, Normand, of Huntsville, Ala.; a son, Christopher, and daughter-in-law, Carrie, of Pennacook, N.H.; six grandchildren and two great grandchildren.

After moving to Texas at age 4, Annette attended Our Lady of Victory elementary school. In 1937, the family returned to Connecticut, where she graduated from Darien High School in 1943. During World War II, Annette was a junior hostess at the USO, was active in the junior Red Cross and was involved in other activities to support the war effort.

— an obituary from the Dinoto Funeral Home

After the war, Annette worked as a dental assistant in Darien and New York City. During her time in New York, she had the opportunity to attend operas at the Metropolitan Opera and became an opera enthusiast for the rest of her life.

In 1950, Annette took a job at Catholic Charities where she worked as a secretary until her marriage in 1955. She and her husband, Gerald moved to Gales Ferry in 1959, where they raised their three children.

Annette attended Our Lady of Lourdes Catholic and was an active member of the Ladies’ Guild running the Finger Lickin’ Bakery and participating in the Spring Festival for 23 years. She also taught Religious education for grades two through seven for 12 years.

A true “beach bum”, Annette loved Cape Cod and enjoyed her many vacations there walking the beaches. On any nice day during the summer she could be found with her friends the “beach bunch” at Eastern Point Beach.

She loved to read and loved to cook, experimenting and inventing new recipes. Annette also very much enjoyed attending concerts and symphonies with her husband.

Her family will greet relatives and friends from 3 to 5 p.m. Sunday, Dec. 3, at the Dinoto Funeral Home, 17 Pearl St., Mystic. A funeral Mass will be celebrated at 11:30 a.m. Monday, Dec. 4, at Our Lady of Lourdes Church, 1650 Route 12, Gales Ferry. Burial will immediately follow in Avery-Stoddard Cemetery, Route 214, Ledyard.

In lieu of flowers, donations in her memory may be made to the Neurofibramotosis Foundation (Neurofibromatosis Northeast) 9 Bedford St., Burlington, MA 01803 or St. Jude Children’s Research Hospital