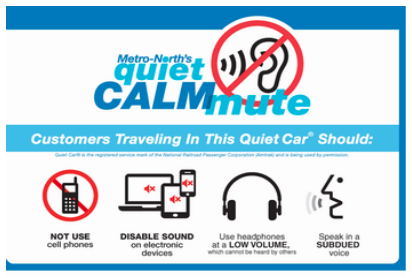 Quiet Car signage. Given Metro-North's penchant for punning, expressed more often in news releases, expect the "quiet calmmute" phrase to last a while.

Effective this Wednesday, June 20, there will now be one Quiet Car on all off-peak trains to better accommodate customers, Metro-North announced Tuesday.

The same pattern will hold for the off-peak trains, only with one car: Headed inbound to Grand Central, the first car is the Quiet Car; headed outbound, it’s the last.

Look for the Quiet Car signage identifying the cars (see the picture with this article).

Customers Traveling On Quiet Cars should:

• Not use cell phones.
• Disable sound features on computers and other electronic devices.
• Conduct conversations in a subdued voice.
• Use headphones at a volume that cannot be heard by fellow passengers.

Customers should not ride in Quiet Cars if they do not want to follow these rules.

To spread and reinforce the message about Metro-North’s Quiet Cars, conductors will hand out on an “as needed basis” specially designed “Shhhhhh” cards that explain the rules of etiquette in English and Spanish.

Weekend trains are not included in the Quiet Cars program.

All regular announcements will continue to be made in the designated Quiet Cars.