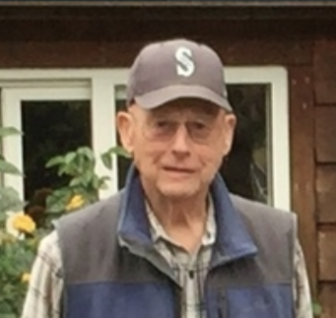 Albert was born on April 26, 1926 in Stamford, Connecticut, one of 8 children. He lived in Darien and graduated early from high school to enter the Army Air Force to serve his country during World War II.

Upon graduation he went to Arnold College in New Haven to earn a teaching degree. Albert subsequently became the elementary school gym teacher at West School in New Canaan for 32 years.

His easygoing way and love for play made him perfect for this job and captured the hearts of many children, especially his grandchildren. He just loved kids, it was the perfect fit! Upon his retirement, the gym was named after him.

He married Barbara Albrecht on July 7, 1951 and they had four children: David, Jeffrey, Michael and Julie, who lived most of their childhood in Ridgefield. The warm weather of Arizona called them when Albert retired, and after living there 23 years, they followed Julie to Washington State where they have lived ever since.

Albert enjoyed many interests including woodworking, clock making, gardening, baseball and Boy Scouts. He was a scoutmaster in Ridgefield for many years, an interest that was passed down to his sons and grandsons. He also coached many a youth baseball team and his athletic talent and teaching skills are a huge part of our family.

He will be missed by his wife, Barbara; his four children; 10 grandchildren and seven great-grandchildren; one sister, Betty Richter of Darien; and many nieces and nephews.

There will be no service at this time.

— This obituary recently was published in the Darien Times.

Editor’s note: His brother, Charles Scribner, predeceased him on June 27 in Darien.