Colonel Vincent P. Surwilo passed away peacefully at home with family by his side on Sept. 27. He was 80. 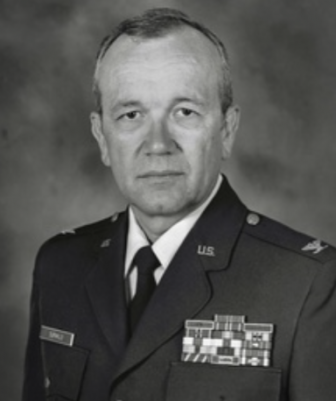 Born in Darien on Sept. 18, 1940, he was the son of the late Edward and Rosemarie Surwilo and was married to his beloved wife, Maggie, for over 55 years.

A veteran of the Vietnam and Gulf Wars, Col. Surwilo served his country for 28 years as an officer in the United States Air Force earning many distinguishing awards including the Bronze Star.

During his career as a contracting pricing analyst for the Department of Defense, Vince was famous among his colleagues for always negotiating the best contract deals for his beloved country.

For several years, Vince served on the board of the Venice Chapter of the Military Officers Association of America. Friends and family will miss Vince’s clever wit, tremendous generosity, and wise mentoring.

A visitation will be held from 4 to 6 p.m., Tuesday, Oct. 6, 2020 at Farley Funeral Home in Venice, Florida. A celebration of Vince’s life will be held at Epiphany Cathedral in Venice at 10 a.m., Wednesday, Oct. 7. A graveside service with full military honors will be held at 12:30 p.m., Thursday, Oct. 8  at Sarasota National Cemetery

Donations may be made to the Paralyzed Veterans of America or Tidewell Hospice.

— an obituary from Farley Funeral Home, where online condolences may be left