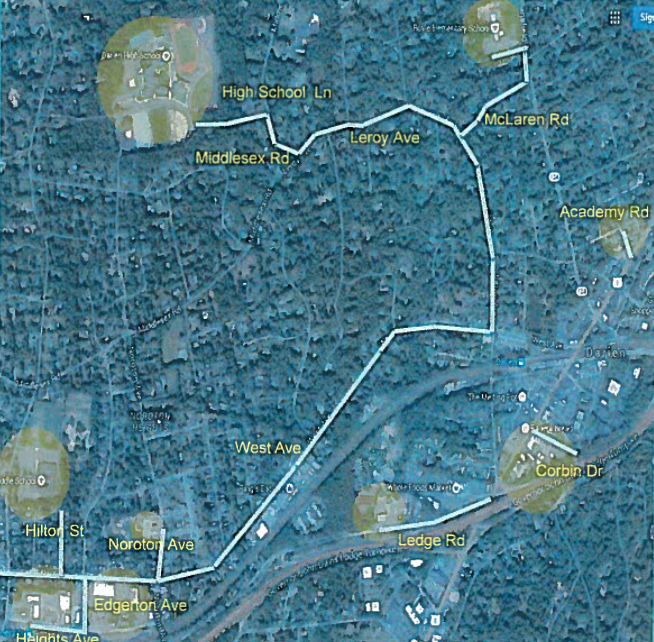 A map provided to selectmen showing streets where natural gas lines would be laid.

Starting this summer, Eversource wants to start digging to install natural gas pipes along West Avenue and up to Darien High School and Royle School, according to a company official.

Chris Luca, a project manager for Eversource, told the Board of Selectmen on Monday that the utility and the town are close to an agreement on a $4.2 million project to lay 18,700 feet of pipes in town — about 3 1/2 miles. Town officials and the utility plan to get streets near schools dug up and repaved before students return in the fall.

The company is aiming to have gas service ready for spring of 2017, when developers of major commercial redevelopment projects in the Noroton Heights business district and Corbin Drive/Post Road hope to get construction started.

Middlesex Middle School and the Noroton Heights Fire Department would also get gas service, which has been less expensive in recent years than oil heat.

The Board of Selectmen unanimously approved the proposal, pending final details still being negotiated between Eversource and Town Attorney Wayne Fox. The Planning & Zoning Commission must also approve the agreement before it can go into effect.

Where the gas lines would go

Gas main lines would run along these streets (see map, below):

As part of the agreement, Eversource will provide more gas service to Holmes School, which already gets a low-pressure feed from the utility. The current service at the school is not enough to heat the entire building. The work would be part of the utility’s ongoing project to move gas lines in the area of Intervale and Abbey roads.

A map provided to selectmen showing streets where natural gas lines would be laid.

No town funds or easements are needed for the project, which would dig beneath public streets and directly onto the properties of customers who want service. In addition to major commercial customers, any residents along the routes would be able to tap into the service — the company estimates about 225 homes could do so.

Savings for those who can get natural gas 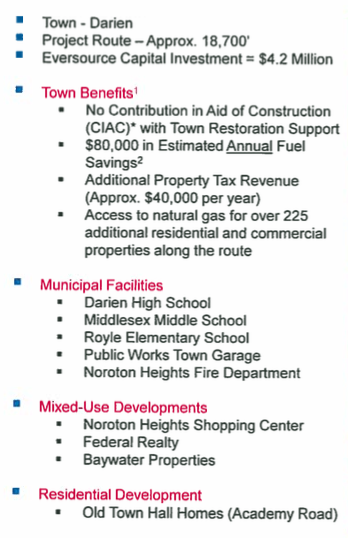 Part of a document shared with selectmen at Monday night’s meeting. For Footnote 1, see note at the bottom of this article. Footnote 2 says “Based on $1.73 per gallon for #2 heating oil and $1.25 per gallon for propane.”

For some time now, the school district has been investing in dual-fuel furnaces in its schools in anticipation of a possible switch to natural gas service, when it becomes available, town Public Works Director Edward Gentile told the selectmen. The town public works garage on Ledge Road would also be able to tap into a natural gas line.

Eversource would pay an estimated $40,000 in property taxes each year once the lines are installed, and the town government (along with Noroton Heights Fire Department, a separate organization) would save an estimated $80,000 annually in heating costs.

“The current rate payer is not going to be impacted by construction costs [of the new gas lines] for 10 years,” said Chris Luca, project manager for the utility, at the Board of Selectmen’s meeting. The utility expects to profit from the natural gas expansion project, but its overall profits are regulated by the state and capped at 7.2 percent.

Eversource wants to persuade as many customers as it can along the route to switch to natural gas, and it will hold a public information hearing on the project in the future, Luca said.

The utility will have streets repaved once it installs gas lines under them, and if customers sign up for gas service while the project is underway, the streets in front of those homes won’t have to be dug up again, he said.

“We work directly with you; we know your needs,” he said. “It’s cleaner; it’s safer; it’s less maintenance; in most cases it’s less costly,” he said of natural gas, comparing it to heating oil or electricity.

Luca said the utility is willing to talk to the company managing The Heights at Darien housing complex (which replaced Allen-O’Neill Homes) at the corner of West Avenue and Noroton Avenue. That redevelopment took place before natural gas service was available.

Utility and town working together

The town is helping Eversource with the project by allowing the company to store pipes and equipment at the Darien Transfer Station/Recycling Center on Ledge Road.

A soil-sifting operation, which Eversource expects to start in order to re-use soil dug up during the project, would be located at the transfer station, Gentile said. The Planning & Zoning Commission would need to approve that operation before it starts, he said.

“The residents of Darien will be the beneficiaries,” First Selectman Jayme Stevenson said, “and it lays the groundwork for future expansion.” Currently gas lines run along the Post Road and in areas on the far western side of town, around Abbey and Intervale roads.

Selectman Susan Marks said the proposal “all sounds very good and very exciting. I see no downside to it.” Selectman Rob Richards said, “This is a huge benefit to residents.”

Editor’s note: Footnote 1 in the image listing benefits as reprinted in this article states: “To view the additional benefits of using natural gas visit http://www.eversource.com/content/ct-c/residential/switch-to-gas/benefits-of-natural-gas.”

Editor’s note: While town officials used the name “Yankee Gas” for the utility during Monday night’s discussion, the gas utility, like the former Connecticut Light & Power electricity utility, are now known simply as “Eversource,” so we’ve changed the name in the article and headline.