"Darien 127," the Darien police boat, was bought in 2016 and in the water for its first full boating season last year. The boat is much more capable than the one it replaced, Mulcahy told the Police Commission.

Darien Police Officer Derek Mulcahy says that one of the more frequent things he and other officers on the department’s police boat do when out on the water is tell boaters that they’re violating a safety regulation.

“When we’re out there and we’re not responding to calls, we’re kind of driving around, out looking for boating violations,” Mulcahy, commander of the Marine Division, told the Darien Police Commission at a recent meeting. “A lot of it is just kind of educating people. We don’t see people intentionally breaking laws — a lot of people just don’t know what they’re supposed to do.”

“Overloading boats — too many people on them — we see that a lot with the younger kids,” he said. “They go out and when that’s the case, they generally don’t have all the safety equipment, like life jackets.

“Darien 127,” the Darien police boat, was bought in 2016 and in the water for its first full boating season last year. The boat is much more capable than the one it replaced, Mulcahy told the Police Commission.

“If I see a lot of young kids on a boat, there’s a good chance there’s not enough life jackets on it. So we often try to stop that early on and send them back, and just try to teach them the importance of it.”

But it’s not just boaters out on the water who need to keep safe, Mulcahy said.

“[With] paddle boarders it’s a constant thing. Nobody knows they have to have a life jacket by law. That’s a Coast Guard requirement, so we’re constantly stopping them and telling them. It’s not that people are intentionally breaking rules — they just don’t know.

“So that’s an ongoing educational effort, and I’ve actually reached out to [the town] Parks and Rec [Department] to see if we can put some kind of sign up where paddleboards are stored. Maybe just educate people. Set something up. That’s something we’re working on, and we hope that helps a little.”

Overall, Mulcahy said, people out on Darien waters are responsible and act safely. “We don’t have too many issues when I’m in Darien. […] We do have a good crowd of people who are in Darien waters, I think.”

In the past couple of years, there’s been only one fatality in the water, and last year was “relatively quiet,” Mulcahy said. “We only had one accident with pretty significant, serious injuries, which is one too many, but things do happen.” 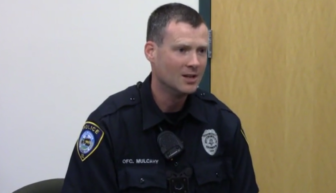 In some other towns in the area, boaters are a little more boisterous and loud when they’re having a party, he said. That can happen in Darien, too, he said, and “It is something we try to deter and keep on top of.”

Fewer boaters have been out on the water so far this season, probably because it’s been a colder spring than usual, he said.

The police boat has been out on patrol only part-time so far this year, on Fridays, Saturdays and Sundays, Mulcahy said. The hours of operation are usually 10 a.m. to 7 p.m., but the hours will be varied “so people don’t know exactly when we’re out there.”

“Toward the end of this month, we’re going out seven days a week, as high school kids get out of school,” he said.

Collaboration between Darien officers on the police boat and marine units from nearby police departments is important, because it’s often safer to deal with more dangerous situations with more first responders on the scene, Mulcahy said. There’s no other Darien police boat out on the sound.

Marine Division police help Stamford and Norwalk police and get help in return, he said. Marine units from as far as Greenwich and Westport may also come to Darien to help out with an incident.

When a fight broke out on a large fishing vessel off of Stamford, Darien police helped when a man was handcuffed and put into custody, Mulcahy said. Getting the man off a boat and into a police boat is the kind of situation where more officers are helpful, he said.

The Marine Division has posted these links useful for boaters on its Web page on the Police Department website:

For emergencies while on the water, contact the Marine Division on VHF channel 16.

Noroton Fire Department deploys a fire boat in Darien waters, and the police Marine Division works closely with them, Mulcahy said. Although the fire boat isn’t there to do police work, the fire volunteers are more likely to live in town, and that can sometimes mean they can get the boat out to the scene before the police boat arrives, he said.

When the Marine Division’s boat is out on the water, “We’re looking for, primarily, people speeding into harbor,” he said. “That’s probably the No. 1 complaint that we get.”

Mulcahy was asked by Police Chief Ray Osborne about people operating boats while intoxicated. “It’s very similar to driving under the influence on the road, right?” Osborne said.

“Yes. The statutes are different, but it’s essentially the same form of penalties. You’re going to have a boat license suspension, possible jail time for multiple offenses, and it’s the cost of the court of expenses for everything,” Mulcahy said.

“Then you’re getting your boat towed, and it’s substantially more expensive than towing a car. It’s hundreds and hundreds of dollars. It’s something you want to avoid.”

Mulcahy spoke at the Darien Police Commission meeting on June 13: