Where some may have just seen a blank wall, a small group of Darien High School students saw a big canvas.

Over the course of a few weeks, the 12 students transformed a temporary sheetrock wall put up during construction in the school’s cafeteria into a public art display honoring the Class of 2018. 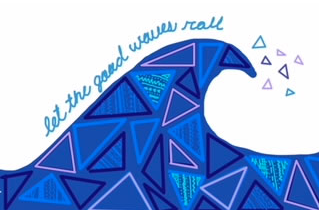 Image from Darien Public Schools News of the Week newsletter

Art teacher Jaclyn Sammis said the students created the mural design — a stylized blue wave — at the request of Principal Ellen Dunn. The students, members of the Mural Painting class, worked together and created the first draft design (see image at right) using a school-issued iPad.

The blue wave was drawn over a series of days. Students taped off sections of the wall, and painted lines and patterns meant to create depth and interest. Above the mural are the words: let the good waves roll.

See this time-lapse of the mural creation: Mural Time Lapse

The installation was an opportunity for students to apply their understanding of scale and creating art in a public space, said Sammis. Students had to make sure they had all their supplies — paints, paper towels, tape — since it was a good distance from the art rooms.

When it was complete, pictures of the more than 330 seniors flanked the wave. DHS teachers then placed positive comments and quotes on the pictures of every student of the upcoming graduating class.

Sammis said students were proud of the mural and wanted to preserve it beyond June when it is to be removed.

“Part of this process as an artist is being willing to let it go once you have finished a public art display,” said Sammis. “You have to be OK to know you were part of the creation.” 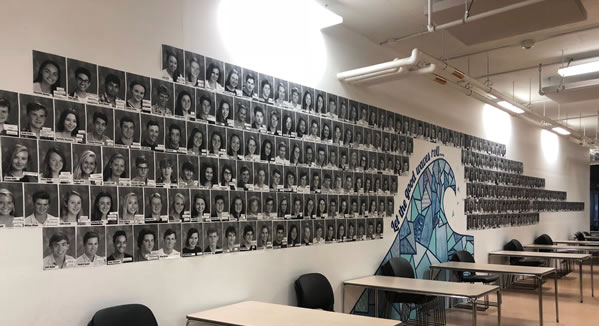 Photo from the Darien Public Schools News of the Week newsletter

The temporary wall in the cafeteria, decorated