Vera Nicolopoulos, who survived World War II in Germany, came to America in search of a better life, and raised two children as a single mother, passed away at the Lafayette Nursing Home on June 13, 2021, just short of her 92nd birthday. 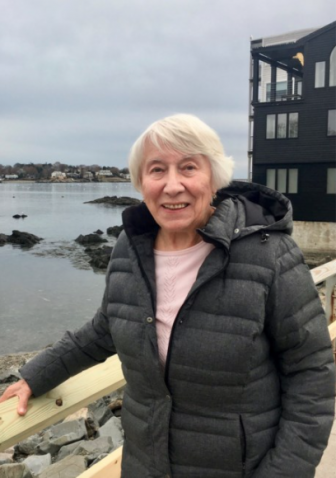 Vera Nicolopoulos, 91, passed away June 13. No public funeral is scheduled at this time.

She was a strong and brave woman who faced adversity with determination and good humor and was an inspiration to all who knew her. She was born Vera Helene Martha Thomas on June 18, 1929, the only child of Arnhold and Helene Thomas.

Her father was a blacksmith who died during the war, circumstances unknown, while on medical leave in Berlin. She and her mother lived in Berlin throughout the war, surviving numerous bombing raids and the Berlin Blockade which led to severe food shortages in the city.

After the war, Vera completed a three-year apprenticeship in dress making and emigrated with her four-year-old daughter, Petra, to join her husband in Stamford, where he had accepted a position as an engineer. In an effort to better acclimate to life in the U.S., she sent her daughter back to Berlin to live with her mother so she could go to night school to learn English and eventually get a job working as a pattern maker for Vogue Patterns.

After her first marriage ended and Conde Nast Publications, Vogue’s parent company, moved to New York City, she worked as a seamstress for several clothing stores, including H. Frankel & Sons in Stamford and Mitchell’s in Westport. While she would have had greater job opportunities in New York, she decided that a big city was no place to raise a child.

In 1968, she married Peter Nicolopoulos, who had recently emigrated from Greece, and they later had a son, Christos, when she was 41 years old. She and her second husband lived in Norwalk and Clearwater, Florida, until their divorce in 1982. She continued to live in Norwalk where she was a member of the Calvary Baptist Church in Darien and the Quartette Club Singers, a traditional German singing group.

Vera is survived by her daughter, Petra Langer, and her son, Christos Nicolopoulos, both of Marblehead; her son-in-law, Phil Axten; her two grandchildren: Simon Axten, and his wife, Sarah Benrath, of Bend, Oregon; and Karen Axten, and her partner, Aaron Johnson, of Boston; and four great-grandchildren, Lucy, George, Frederick, and Alistair.

No public services are scheduled at this time.

In lieu of flowers, contributions in her name may be made to Grace Community Church, 17 Pleasant St., Marblehead, MA 01945.

— an obituary from Eustis & Cornell Funeral Home, where online condolenced may be left