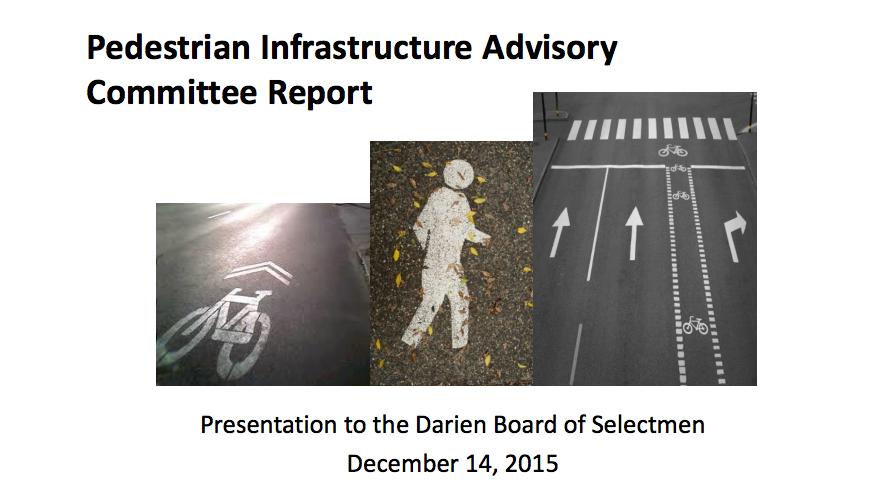 This 35-slide presentation was given to the Darien Board of Selectmen on Monday. The full report of the committee is 130 pages long.

Darien could make its sidewalks and roads safer for pedestrians and cyclists by adopting a series of improvements, initially near schools and train stations, an ad hoc committee told the Board of Selectmen.

In a presentation to the board Monday, the Pedestrian Infrastructure Advisory Committee recommended changes that would make roads safer, but Beth Harmon, chair of the panel, said committee members also wanted to make the streets “healthy, more accessible and enjoyable.”

The committee suggested that the town make some inexpensive, easier improvements sooner — such as painting new crosswalks at specific spots and adding signs and bicycle lane markers.

For the longer term, the committee recommended a long list of improvements, including lighting under bridges, building new sidewalks or extending them, adding “bollards” (posts, to which chains could be added to provide barriers for pedestrians to prevent them from walking on streets at unsafe spots; the word is also used for plastic post-like signs that can be placed temporarily on a street), and other infrastructure improvements.

The committee identified a total of 10 “key areas” around town where improvements should be made first — areas within a half-mile distance of the town’s seven schools as well as near four train stations (including two New Canaan Branch train stations — Springdale and Talmadge Hill — just beyond the town borders). Darien High School and Middlesex Middle School are close enough together that they were considered as one key area. 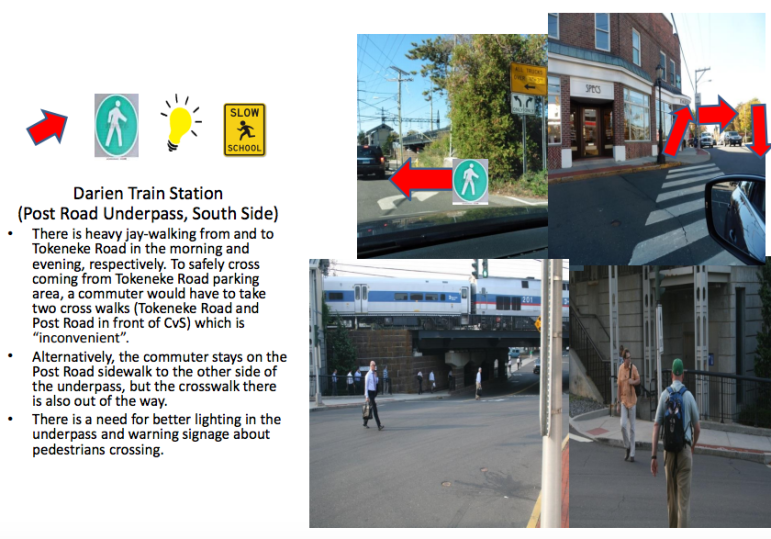 The panel suggested 115 improvements to crosswalks (in some cases recommending new ones), 14 extensions of sidewalks, 11 new sidewalks, 27 bike lanes on roads and new or improved lighting at 17 locations.

On the other hand Hawkins said, several “crosswalk landing pads” (the ramped areas, often with bumps for better footing where crosswalks meet sidewalks and wheel chairs or baby carriages can be rolled past without steps) are “dangerous or in disrepair [at] Royle School, Holmes School, McLaren/Mansfield corner, Mansfield/Overbrook corner.”

In addition, Hawkins said, many sidewalks are in disrepair, including on prominent streets such as Mansfield Avenue, West Avenue, Tokeneke Road and Nearwater Lane. “These should be showcase sidewalks for our town,” he said. (Note that West Avenue was also on Hawkins’ list of sidewalks in good shape — it’s a long road, apparently with variable sidewalk quality.) 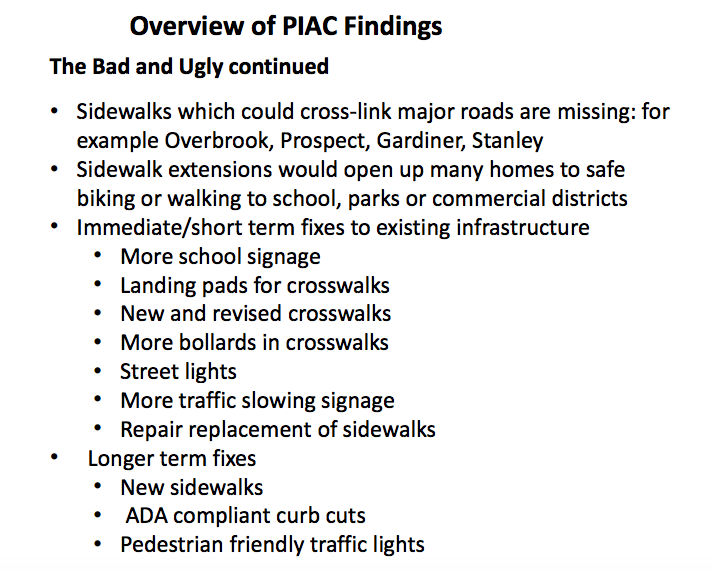 The committee met with various officials knowledgable about the subject and met with local officials familiar with the town’s streets (who often were also informed about safety for pedestrians and cyclists). People around town also gave the committee their recommendations, and an online survey resulted in 256 responses, providing many more ideas. 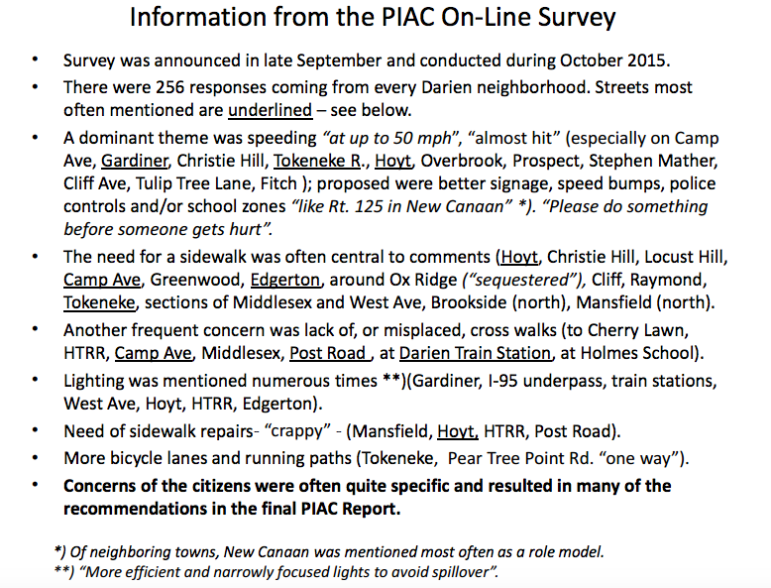 Committee members also drove and walked around the key areas and came up with lists of specific improvements on many streets. They called individual sites with problems ripe for fixing “hot spots.” (At some points during the presentation, the phrase “hot spots” was used to describe the “key areas,” but the committee’s documents distinguish the two names.)

To provide examples to the selectmen, the presentation included more than a dozen descriptions of hot spots in two of the key areas — downtown and near Middlesex School. Here are some from downtown, together with some of the committee’s recommendations: 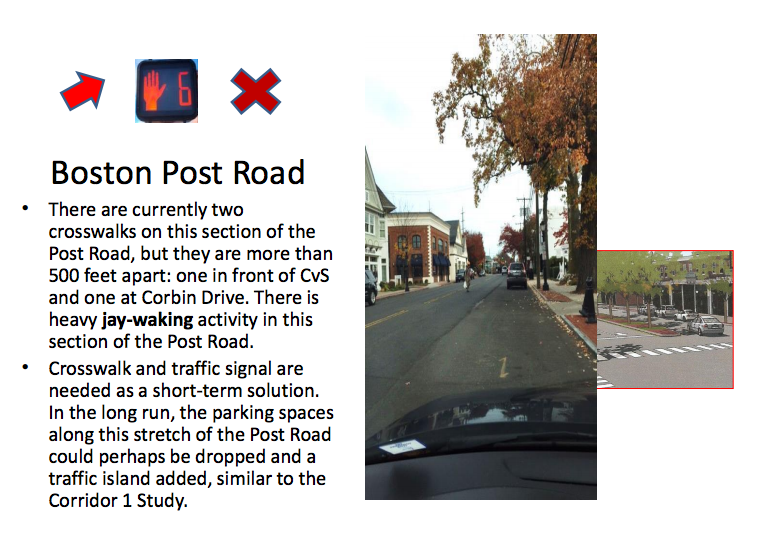 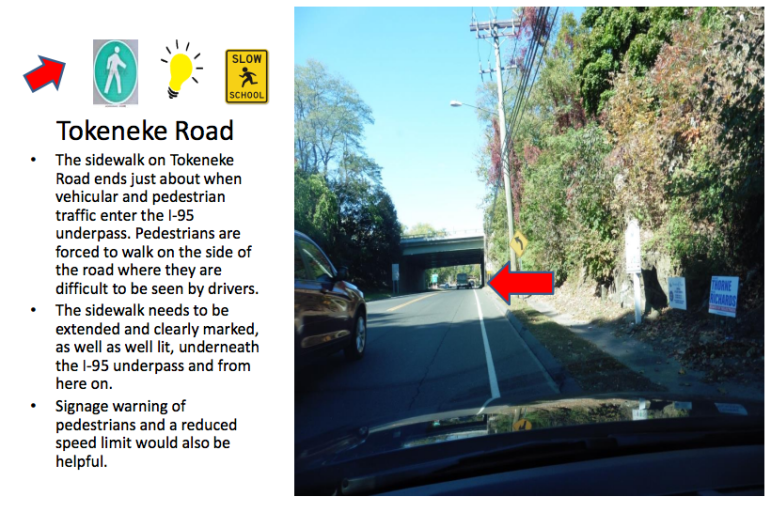 The town should set up a permanent committee to oversee improvements for pedestrians, cyclists and anyone not using a motor vehicle to get around on local streets. The committee also recommended a safety campaign to improve pedestrians’ and cyclists’ understanding of the rules of the road.

The panel was formed about six months ago by the Board of Selectmen to make recommendations. The committee was not asked to set spending priorities, and they aren’t experts on public works matters, although several members of the committee are members of the Representative Town Meeting.

Board of Selectmen reacts

Selectmen said they were grateful for the work put in by the committee. Members met 20 times, usually on Tuesdays, since mid-summer to put their recommendations together. Individual committee members walked around particular key areas to see what improvements were needed. One member, Holly Shulz-Amatruda, walked around three different key areas.

“What we gave you — what your charge was — was not easy,” First Selectman Jayme Stevenson told the committee, thanking them for their time and effort.

Selectman Susan Marks also thanked the group and said she’d be studying the 130-page report in upcoming days and weeks. “It is a lot to absorb, that’s for sure,” she said.

Selectman Marc Thorne called the hour-long presentation (which had been scheduled to last half an hour) “interesting” and Selectman Rob Richards asked, “When do we get started?” in making changes. Stevenson said the selectmen will need to review the recommendations, set priorities and decide which ones to fund, and when.

Here are all the images from the 35-slide presentation given to the Board of Selectmen: 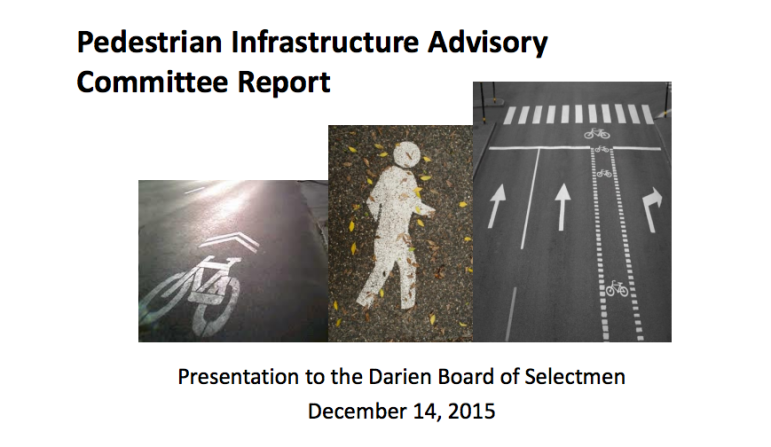 This 35-slide presentation was given to the Darien Board of Selectmen on Monday. The full report of the committee is 130 pages long. 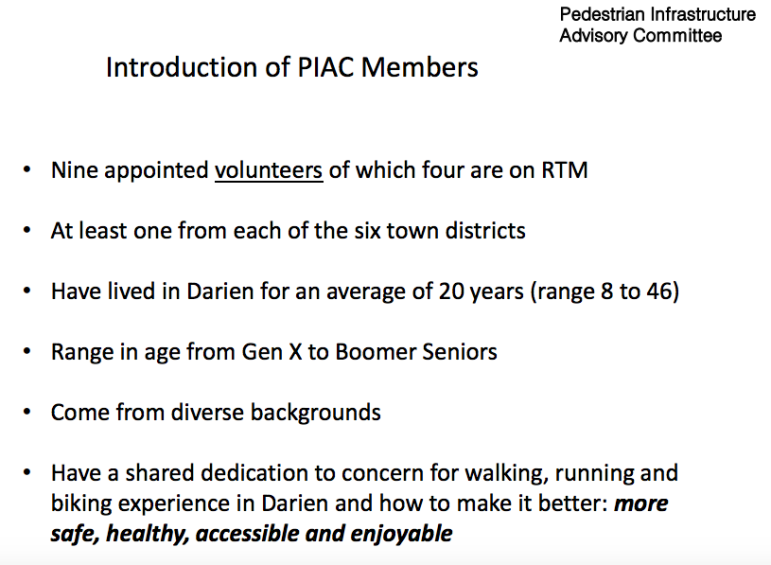 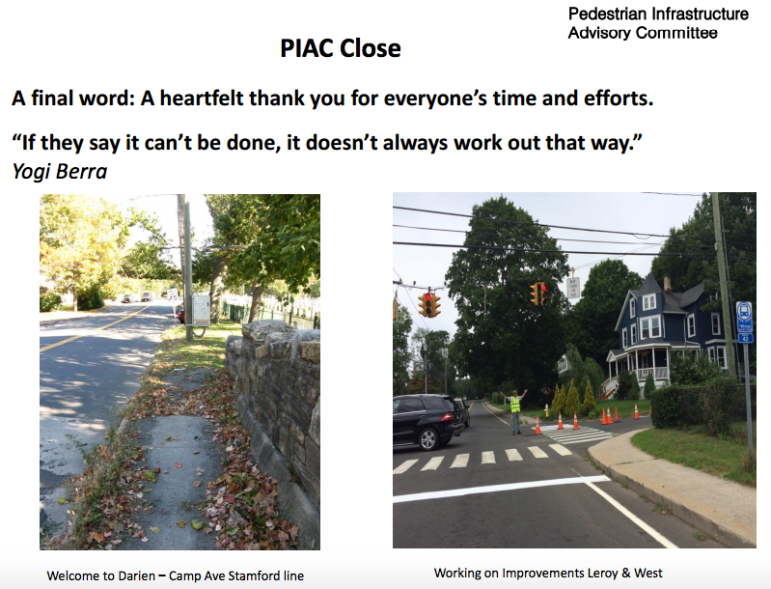 Editor’s note: Information on the Board of Selectmen reaction to the report was added at 10:35 a.m., Tuesday.