When it comes to making plans on how to improve the Noroton Heights Railroad Station, one of the highest-volume train stations in Connecticut and of enormous importance to many town residents, you could say there are a lot of moving parts.

One illustration of that occurred within a recent eight-day period in town: On Sept. 23, state Department of Transportation officials held a public meeting in Town Hall to show the public their plans to replace two, 850-foot-long concrete boarding platforms on either side of the tracks at the station. 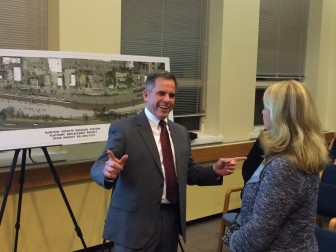 John Bernick, assistant rail administrator with the DOT, talking with First Selectman Jayme Stevenson. He said  the state, in general, wants to cooperate with town and commercial real estate businesses to improve the stations.

Not to worry about this interfering with any plans for improvements at the station — we can replace other features of the station without disturbing the newly rebuilt platforms, they said.

And eight days later, on Oct. 1, in the same room (206) in Town Hall, consultants for the town’s upcoming 2016 Plan of Conservation and Development suggested replacing the station building with a new building to the east, at the intersection of Edgerton Street and Heights Road.

The station building then would no longer be where the platforms are, it would be just to the east of them — meaning either a longer walk from the new building to where trains are boarded or bringing back equipment to construct even longer platforms at some point after the architects, contractors and equipment have left the scene. 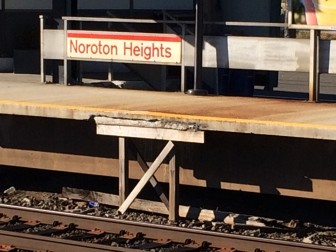 One of the many parts of the station platform that can be seen to be crumbling.

The consultants said stores could be put on the north side, or a parking garage, or a park-like area with a depression that could fill up with water when the area floods.

The suggestions were extremely preliminary — consultants were throwing out ideas to help town officials and the public decide what development or conservation goals there should be. Any proposals would take time to get support, then time to develop as plans, then final support of detailed plans, and then construction.

In the meantime, the concrete platforms at the station are clearly falling apart, and, while the Department of Transportation doesn’t see a dire need to immediately replace the leaky, aged pedestrian bridge over the tracks, the department’s concerned enough to monitor it.

This ariel photograph of the station was shown at the Department of Transportation’s public meeting. Edgerton Street is to the north, just to the right of the crease through the photo. The platforms can just be seen on either side of the tracks.

And that part about gathering consensus for any changes to be made won’t just involve people and officials in Darien. The land is owned by the state and leased to the town, which is expected to maintain parking lots there. Any major development of the site will need state approval.

And that “leased to the town” part is currently in limbo — the state let the railroad station leases expire in Darien and elsewhere without negotiating renewals, so the traditional arrangement exists now on a month-to-month basis.

Local officials in Darien and elsewhere became concerned about that when officials in Gov. Dannel Malloy’s administration began talking about the state taking over zoning powers for transportation-oriented development in the area around train stations. The Legislature rejected the idea, but some in town, including candidates for Board of Selectmen, have said they’re worried the idea may come up again. 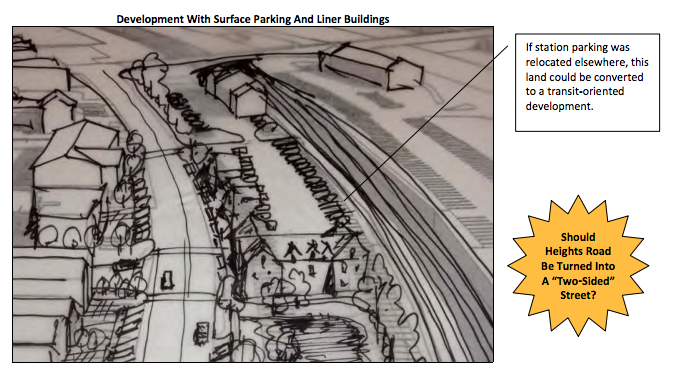 A rendering of one of the consultants’ ideas for changing the train station.

Meanwhile, the Palmer family and Federal Realty, owners of the two large tracts that make up most of the Noroton Heights business district, must be wondering what changes they’ll have to make in their plans. The consultants told the Planning & Zoning Commission last week that the town could adopt strict “village zoning” regulations that could encourage the forming of a street through the middle of both tracts, and storefronts along Edgerton Street.

P&Z Commission members, who were just hearing the consultants talk about the ideas for the first time and had only recently read their written description of the possibilities, didn’t give a definite opinion about how strong a role they wanted in the commercial redevelopment or how big a change they’d like to see at the train station.

If the southern side of Heights road becomes a row of stores, with a railroad station facing the foot of Edgerton Street, that would change patterns of foot traffic (and perhaps vehicle traffic). There could also be an opportunity for businesses that already manage commercial real estate to manage the new commercial buildings that would be built on state land.

Another idea from the consultants. A possible new location for the station building is shown in the lower righthand corner, across from the intersection of Heights Road and Edgerton Street.

At the Sept. 23 public meeting run by the Transportation Department in Town Hall, state DOT officials said they’re very open to talking with the town about development near the train station and how the state might cooperate with that. Malloy’s administration is spending more money on transportation projects, and DOT officials, while they have no present plans for other improvements at the station, say they’re willing to listen to suggestions from the town.

First Selectman Jayme Stevenson has said she strongly favors improving the station and would like to see a new pedestrian bridge and new station building, full access for people with disabilities and some other improvements, such as covering some wiring near one of the entrances to the platforms.

She’s gone so far as to say the town might help pay for part of the redevelopment of the site and she’s willing to draw up preliminary plans with the town Department of Public Works on a new station building.

While she’s hopeful that other elected town leaders would approve changes and approve funding for them, she said she doesn’t have a proposal and can’t be sure she’d get approval for one. The Representative Town Meeting and Board of Finance, along with the Board of Selectmen, would have to approve funding for such a major project. The Planning & Zoning Commission, and likely other land-use commissions, would have to approve the plans.

Stevenson said she doesn’t have a specific plan to put forward to state legislators or the Malloy administration, and without one, she can’t expect promises to support a particular project, but state Sen. Bob Duff, majority leader in the Senate, and state Rep. Terrie Wood have both indicated that they think the station could use improvements.

State Sen. Carlo Leone, a Stamford Democrat who represents the parts of Darien outside of Duff’s district, is Senate vice chairman of the Transportation Committee.

What do you want to see at the Noroton Heights Railroad Station or elsewhere in town? Inquiring town officials want to know. The Planning & Zoning Commission wants your opinions as they work with the consultants, other town officials and the public at large to put together the 2016 Town Plan of Conservation and Development. You can find out more about the planning here, and you can email town Planning & Zoning Director Jeremy Ginsberg about any of it here: jginsberg@darienct.gov

Last week, some Planning & Zoning Commission members pointed out that many of the train stations in Westchester County have no station buildings whatever — commuters wait in their cars for trains to arrive on cold days or wait under drafty station shelters on the platforms. The commission members didn’t say that they wouldn’t like a station building, however, and the consultants said the building could have multiple uses — housing a coffee shop or even a restaurant, and maybe a dry-cleaning shop, for instance.

Late last month, Stevenson said she was planning on a meeting with town officials and Department of Transportation officials to discuss improvements at the station.

How important the station is to the town

To get a sense of how important the station is to the town, consider these figures: The number of people who board trains at the station on a typical weekday is 1,486 (for Darien Railroad Station, it’s 1,661). A recent U.S. Census count put the town population at 20,732 and the number of households at 6,792.

So — very, very roughly — somewhere near a quarter of all homes in town could have a commuter at the Darien station and almost another quarter at the Noroton Heights Railroad Station. Out-of-towners using the stations (which have more parking than some nearby towns) would lower the proportion — but it would still be very high.

The Noroton station is also relatively big for Connecticut railroad stations. Out of 38 stations on the New Haven Line and its branches in Connecticut, Noroton is the 13th largest by number of riders boarding trains. The station has more riders than the entire Danbury Branch (1,288) or the Waterbury Branch (469). (All the New Haven Line stations in New York state have a larger volume than Noroton Heights.)

In Darien’s history, the Noroton Heights commercial district grew up around the station once the station was built. Darien’s downtown didn’t exist at all until the station there was built. Both stations have been in town since the 1840s, when the New Haven Line was built through it.

Editor’s note: Information on state Sen. Carl Leone and links to various Web pages were added to this article at 10:16 a.m., Monday.