State troopers arrested a 26-year-old man and seized 2.6 pounds of marijuana, along with crack cocaine and heroin Tuesday morning after they became suspicious of two people in a crookedly parked car at the Darien North rest stop on Interstate 95.

State police described what happened with this account, including accusations not proven in court:

At 11:40 a.m., troopers from the Troop G barracks in Bridgeport saw a green Mazda 626 parked crookedly in a parking spot at the rest stop on the northbound-traffic side of the highway.

Two men in the car were “behaving very nervously,” according to the police announcement.

That caught the troopers’ attention, so they approached the car and started talking with the occupants, who “couldn’t provide answers to simple questions.” 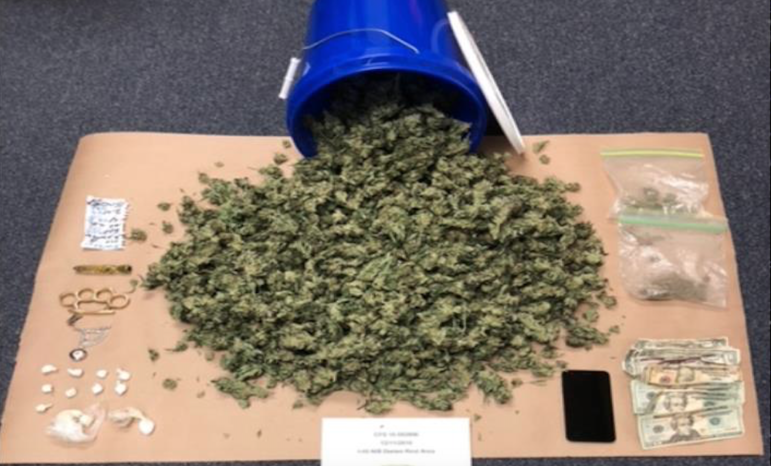 Drugs and money seized by state troopers in an arrest at the Darien North rest stop on Tuesday, Dec. 11.

While they were talking, one of the troopers saw several signs that each of the men might have been taking drugs.

He asked the driver, Matthew Mason, 26, of Maine, for his consent to be patted down. Mason agreed.

The trooper found brass knuckles — which are illegal to carry — on Mason, along with marijuana and crack cocaine.

A search of the car found a total of 2.6 pounds of marijuana, 19.3 grams of crack cocaine and 13.7 grams of heroin and several items of drug paraphernalia.

Mason was also charged with improper parking, according to police, although the Connecticut Judicial Branch website doesn’t display a record of that motor vehicle charge or a charge of possession of drug paraphernalia.

Mason appeared in state Superior Court in Stamford and is scheduled to appear again on Jan. 30. His bond has been set at $200,000.