Theodora Cogswell “Do” Deland of Darien died at the Stamford Hospital on Nov. 20, after suffering a cerebral hemorrhage the previous Friday. Her family was at her bedside. 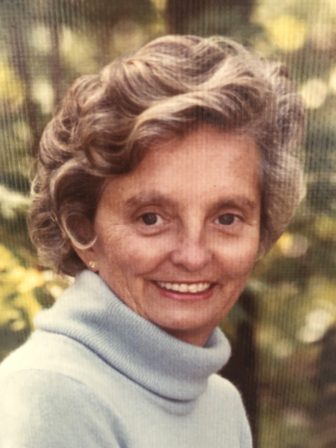 Minutes before passing away she received prayers from the minister of St. Luke’s Parish, where she had been a member since 1950.

She graduated from the Masters School in Dobbs Ferry, New York, attended Connecticut College and graduated in 1946 from Sarah Lawrence College.

Do Deland began her career as a residential real estate broker in Darien in 1971 with Realtech Associates. She was a Certified Real Estate Specialist (CRS) and was designated by the Graduate Realtors Institute (GRE).

In 1981 she was recognized as Darien’s top real estate broker. For 10 consecutive years she was the highest earning broker in all of Realtech’s 19 offices in Fairfield, Litchfield and New Haven Counties.

She acted as the listing and selling broker for the Warner Estate, the largest privately held land in Darien, generating for the Stamford Hospital, the beneficiary of the estate, the largest single gift it had received to that time.

She moved to Kelly Associates in 1991, and finally to Halstead in 2009. Her career spanned 44 years, ending with the sale of her personal residence in Darien, for which she served as co-listing broker.

She likened real estate sales to fishing, a favorite pastime of hers, and relished the negotiations involved in bringing buyer and seller to the closing tale.

Do Deland was a fiercely competitive athlete. Five times between 1962 and 1968 she reached the finals of the Women’s Doubles Nationals American Platform Tennis Association (APTA) championship tournament, winning that championship in 1962 and 1965.

In 1975 she won the Senior Women’s Doubles National APTA championship. She won numerous singles tennis titles and, with her husband, mixed doubles titles at the Tokeneke Club. She also scored a hole-in-one on the Wee Burn County Club golf course. Do Deland loved to sail, from a Merrimack runabout around Kittery Harbor to sunfishes in Long Island Sound and Little Lake Sunapee, New Hampshire.

Do Deland was a member of the Tokeneke Club and Wee Burn Club in Darien, the Mill Reef Club in Antigua, West Indies, the Sunapee Country Club in New London, New Hampshire, the Colony Club in New York and the National Society of the Colonial Dames of America.

Her ancestors include Captain Charles W.W. Pickering, captain of the U.S.S. Kearsarge and the U.S.S. Housatonic in the Civil War; Rear Admiral James Kelsey Cogswell, commander of the U.S.S. Oregon in the Spanish-American War; and Mary Whipple Triall, a sister of a signer of the Declaration of Independence, William Whipple.

On Feb. 1, 1947 in Scarsdale, New York, she married Rawle Deland. They moved to Darien in 1950 and raised four children, while presiding over a succession of dogs, cats, rabbits, hamsters and mice. Though not known as a cook, she was a tiger mom, nurturer, disciplinarian, protector, coach, teacher, advisor, loyal friend, athlete and businesswoman.

Her multi-faceted life was reflected in the nicknames she acquired over the years from her family, friends and business associates: Dosey, Peole, Puz, Do and Del.

In retirement, she and her husband enjoyed entertaining family and friends at their summer home in New London, New Hampshire, and she engaged in community activities, such as playing the Easter Bunny at the Wee Burn Country Club Easter Egg Hunt and, through the Stamford Health and Humor Associates (the HAHAs), donning clown costumes with her husband and entertaining patients at the Stamford Hospital.

The last five years of her life were spent at Atria of Darien, with the assistance of Marie-Ange (Angy) Francois and Marie (Carmel) Moliere. It is often said that no one gets it all; Do Deland’s life is proof to the contrary.