We all dream about traveling first class. Big comfy seats, real food and free drinks. This is the only way to fly.

But did you know that there used to be a handful of private, first-class “club cars” on the New Haven Railroad’s commuter trains? Among the most legendary was one that ran from New Canaan from 1908 to 1976 — Car # 5113.

Fortunately, The New Canaan Historical Society has preserved all of the original paperwork for the private club known as “The New Canaan Car” (NCC). And the story is fascinating. 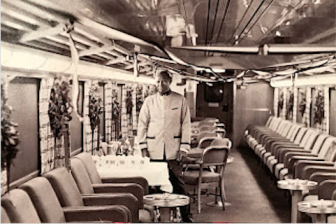 The plush custom-built car carried about 60 passengers, half the load of a regular coach. The car had its own buffet from which an attendant, Willie Spaulding (who worked for 26 years), dispensed continental breakfast in the morning and poured adult beverages in the evening.

Over the years I had heard rumors about this railroad “unicorn” — often spoken about but seldom seen. And one of the rumors was that this gentlemen’s club did not allow women members. Not so, from reading their bylaws. But neither did their membership directory ever show a female’s name as far as I could find. 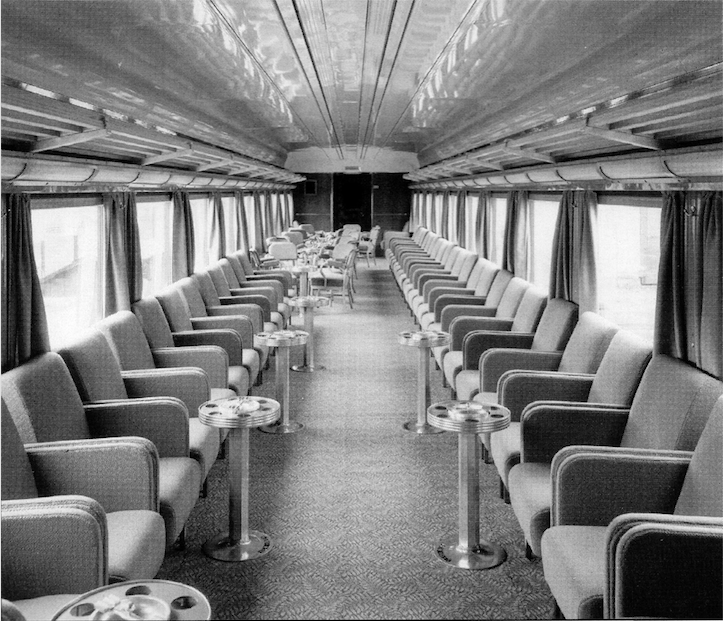 Interior of the New Canaan Car

Car members were allowed to bring guests (yes, even women) with the OK of other members. And the NCC was famous for its birthday parties and holiday fests. One set of minutes went into great detail about the BYO liquor cabinet which used to operate on the honor system but which by 1968 needed a lock and key.

Memberships in the NCC were handed down from father to son but there was no apparent waiting list. In 1972 the Membership Committee was asking members to help identify “goodly and likely candidates” to replace retirees.

After the bankruptcy of the New Haven Railroad, Penn Central took over and the railroad raised its hauling fees. Even though many of the NCC’s members were CEOs of companies doing a lot of freight business with Penn Central, the railroad didn’t care. It was broke and their clout didn’t matter.

The arrival of Metro-North saw the railroad convert from old, heavyweight cars pulled by locomotives to the all-electric M2’s, and this marked the end of the line for the NCC.

In 1976 Metro-North parent MTA said it was willing to rebuild a Bar Car just for the NCC; but at a cost of $70,000, that seemed too rich even for the New Canaan crowd. Worse yet, then-Gov. Ella Grasso said the state should not subsidize millionaire commuters in private cars.

The last run of the NCC’s private car was April 1, 1976. When the train arrived in New Canaan at 6:15 p.m., the party continued till 8. The next day members stripped the car of all its furnishing (which were owned by the club), including 64 chairs, six bridge tables and three smoke stands (ashtrays) which went into storage.

By 1979, the furniture storage fees had drained the NCC’s treasury and after 71 years, the club was dissolved — a sad end to such an illustrious history.