It was a huge mistake, one that commuters and planners have regretted for over 60 years. For it was in 1959 that the last electric locomotive pulled a train on the Danbury branch.

Yes, that meandering 24 miles of single track railroad connecting South Norwalk and Danbury was once electrified. For 34 years, long before the invention of diesel locomotives, it saw electric trains running “under the wire.”.

Why did that change? 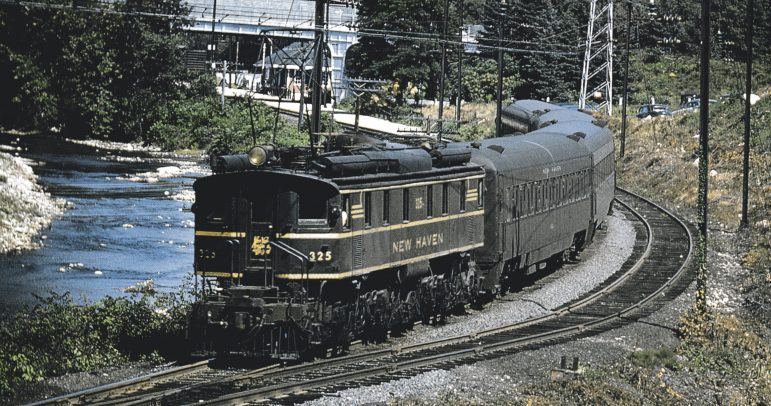 Electric train on the Danbury Branch in Wilton, 1954

Most rail historians, like former New Haven and Metro-North veteran Jack Swanberg blame one man: Patrick B. McGinnis, president of the New Haven.

“He was not a good railroad man,” said Swanberg, a master of understatement. In his two years running the mighty, private and once profitable New Haven Railroad, McGinnis made terrible choices we’re still living with.

By the way, after leaving the New Haven he went on to ruin another railroad, the Boston & Maine, where he was indicted on charges of selling rail cars and pocketing the proceeds.

At the NH Railroad, predecessor to Metro-North, McGinnis cut maintenance and laid off staff, trying to goose up the stock price. But it was when General Motors came calling that he made his biggest error. 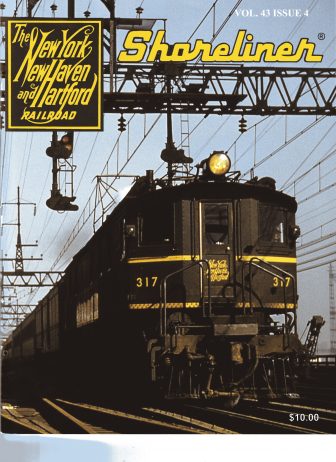 The New Haven’s real profits came from running passengers and freight on the main line from NYC to Boston. Because steam and diesel locomotives were not allowed in Grand Central, the New Haven was one of the first railroads to electrify, starting in 1909, eventually running all the way to New Haven.

But for trains running beyond New Haven they needed to change engines (from electric to steam and later diesel), an expensive and time consuming move. McGuiness thought he could avoid that expense when GM introduced its hybrid FL-9 loco, railroad’s Prius of its day, running all electric powered by third rail, then running diesel.

In the 1950s the New Haven ordered sixty FL-9s from General Motors, replacing their classic but boxy looking EP-2 electrics built by General Electric. By 1959 that meant no more electric service on the Danbury branch. In 1965 they finally took down the copper catenary, selling it for scrap like some sort of junkie.

But the New Haven RR had problems: it was facing a second bankruptcy as the passenger business was dwindling due to more cars on the newly opened I-95, and its freight business was hurting as well.

Plus, the FL-9s were not performing well.

While the original EP electrics had 4000 hp, the hybrid FL-9s were less than half that. And that meant poor acceleration and longer travel time, especially on commuter trains making a lot of stops. Longer trains that used to have one electric loco now required two or three FL-9s. 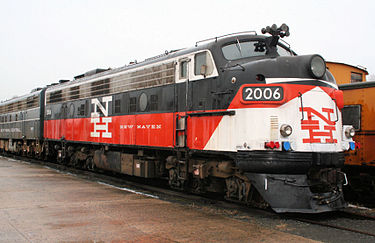 The FL-9s were also expensive to maintain and dirty, even before we cared about air pollution. And on the steep Danbury line where it’s a 360-ft climb from the coast to the Hat City, traction is a problem even today in the fall and winter.

In cold weather the diesels still have to be kept running all night, just idling in the yard (creating noise and air pollution). Their 25-year life expectancy wasn’t impressive and overhauls were costly.

“It was a mistake to take down the wire (on the Danbury branch),” says Swanberg who has written extensively on the topic. But electrics may be coming back on the branch.

After a stack of studies and plans calling for re-electrification, CDOT’s rail chief Rich Andreski says “we are serious this time.” But rather than re-string the overhead wire, the solution may be a new hybrid rail car: one that runs under the wire on the mainline and on batteries on the branch.

Influential (but lame duck) State Sen. Will Haskell, chairman of the Transportation Committee endorses the idea. So, fast, clean electric trains may yet return to the Danbury and other branches of Metro-North.

But only if we hadn’t made that mistake 63 years ago and taken down that wire.