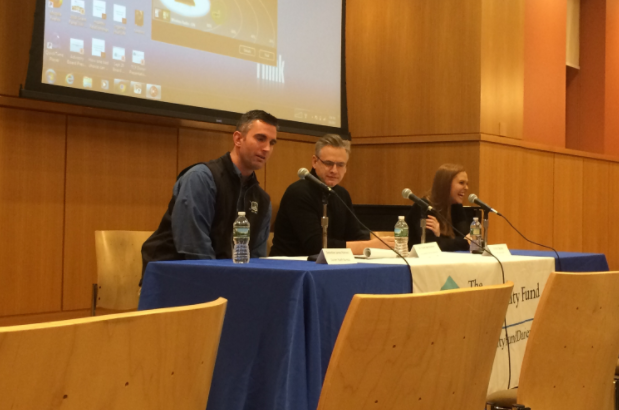 After a documentary film about the dangers of binge drinking among teenagers and young adults was shown at Darien Library on Monday night, James Palmieri, recently the school resource officer at Darien High School, told the audience that, just as in the documentary, a Darien teenager had died from the affects of binging on alcohol when his friends had left him.

“This isn’t something that happens [only] in other places,” Palmieri, now a detective with Darien police after 4 1/2 years as the department’s school resource officer at the high school. He was speaking as part of a panel discussing binge drinking after the audience of about 150 saw the movie “Haze.”

“[I]n some cases, one of which I was directly involved with, the kid ended up dying purely because he drank too much, and his friends didn’t want to deal with him,” Palmieri said. “One of them was thrown in an Uber [driving service car] and sent home, and you know, circumstances unfolded, and he ended up dying.”

When kids who are with another teenager who’s been binge drinking and groggy leave that teen alone, even if it’s to drop the drunk teen off at home or at Post 53, the drunk teenager needs to be watched, Palmieri said. As another panelist, Dr. Frank Bartolomeo, said, alcohol is a depressant and too much of it can lead to a heart stopping. Breath can also slow down, and a groggy or unconscious drunk can choke on his or her own vomit.

“So just understand that this happens,” Palmieri said. “I’ve been there. I’ve seen it. It’s not something that’s not happening here.”

Darien Police don’t announce deaths from alcohol or drug abuse, and families don’t tend to say anything about them, he said — so the public at large normally doesn’t know it happens in town, he said.

After someone stops drinking, alcohol continues to be absorbed in their system, and someone already drunk may get more drunk, to the point of danger for some time after the last drink, Palmieri said — so don’t leave that person alone.

“[D]on’t leave people, because you […] may drop them off at home, and you think they’re pretty banged up and they’re just going to sleep it off — but they’re going to continue to get drunk,” he said. “You don’t know what’s going to happen after you leave, so don’t leave people.”

Palmieri pointed out that the friends who leave a seriously drunk teenager are often themselves drunk and not thinking very clearly. They also may not know how dangerous it is to leave someone alone who’s that drunk, and they tend to be concerned about getting into trouble themselves.

Palmieri said that calling 911 is still a good option in that circumstance, and police have “gone to bat” for the other teenagers with the drunk one so that they don’t face the penalties Darien High School imposes on students who are caught drinking or caught with students who are drinking.

Palmieri represents the department on the Thriving Youth Task Force. He’s also a trainer for the state’s Juvenile Justice Advisory Committee, teaching a program called “Effective Interactions Between School Staff and Police” to educators around the state and country.

Binge drinking is a serious part of the problem of teenage, young adult and especially college drinking, where it’s contributed to numerous deaths over the years, including the death of Gordie Bailey, an 18-year-old from Greenwich who died after a hazing incident at the University of Colorado-Boulder.

The short version of  “Haze” was shown just before the panel discussion Monday about Bailey’s experience and college binge drinking in general. Suzanne Denunzio of Darien, a friend of Bailey’s family, helped introduce the film.

“[T]his video is NOT designed to be easy to watch […],” Denunzio said. “[T]his is meant to provoke thoughts and start discussions.”

Afterward a panel of three people answered questions from the audience and from some of the the organizers of the event, which was sponsored by the Community Fund of Darien, Thriving Youth Task Force, YWCA/Parent Awareness, Darien Youth Commission, Darien Library and The Community Fund’s Youth Asset Team.

Although much of what was said was addressed to parents, the vast majority of the 170 or so people in the Community Room at Darien Library were high school kids.

Denunzio gave a short description of the circumstances that led to Bailey’s death, then she noted that it was one of many tragic deaths due to alcohol on college campuses, including some recently in Connecticut. She said there are some lessons about binge drinking that parents need to teach their children before they start college:

When you talk to your college age kids you learn that scenes like you will see in this movie — the parties, the pre-gaming, the passed-out students, the alcohol induced, unwanted sexual advances, the ambulance runs — they are all real and they are all commonplace. Almost too commonplace as our children are often desensitized to the seriousness of each incident.

As parents, we cannot be blind to what goes on. we must educate our kids to understand the risks of alcohol: to know the signs of alcohol poisoning and to be a good friend to someone in need — don’t ever leave your buddy; prop them on their side; put a backpack on their back so they can’t roll over; and, above all, call 911 if you see the signs of alcohol poisoning. There are immunity laws to protect those under-age that bring the student in.

Gordie didn’t have to die. He could have just had a stupid story to tell the next day, but instead it turned tragic.

What the Documentary Showed

The film describes Gordie Bailey as personable — even with a magnetic personality — and with a lot of talent in sports and a range of other activities, including acting. About a month after arriving on the Boulder campus in 2004 he was pledging at a fraternity on campus.

As part of the initiation, he and other pledges were told to drink a large amount of alcohol. When they got back to the frat house, Gordie and the other pledges started sleeping. At some point, the alcohol caused Bailey to stop breathing and die. He was found lying on his stomach on the floor in the frat house, where he had been left unattended.

Darien Youth Director Alicia Sillars, one of the founders of the Thriving Youth Initiative, pointed out after the film that the longer version of the documentary shows one of Bailey’s parents saying that they had spoken with him repeatedly about the dangers of driving drunk but they hadn’t thought to talk to him about binge drinking.

Medical experts and others discussed how widespread binge drinking is on college campuses and elsewhere and the dangers of it, and the film showed plenty of examples of it, including drunk and endangered college students suffering from the immediate after-effects of it.

The Point of the Event

Ryan Jones, a high school student and member of the Community Fund’s Youth Asset Team, moderated the event. After about a half hour of discussion and questions to a three-member panel that followed the movie, Jones closed the meeting by saying:

We hope you leave this evening:

In a long discussion with a lot of comments, here are some highlights:

Dr. Frank Bartolomeo, (a Ph.D., not a medical doctor) the director of behavioral health services at the Southfield Center for Development in Darien has had a 25-year career in mental health counseling, management and academic research:

Emily DeLeo, a 2009 graduate of Darien High School and now a Stamford resident, was the third panelist:

3 thoughts on “Teens Have Died from Binge Drinking in Darien: Police Officer at Panel Discussion”