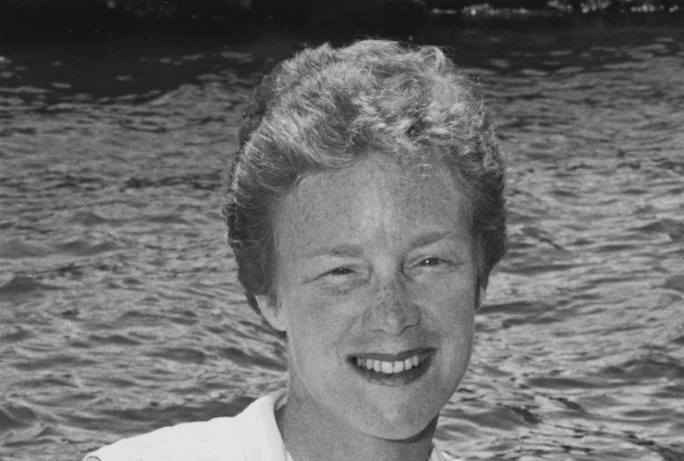 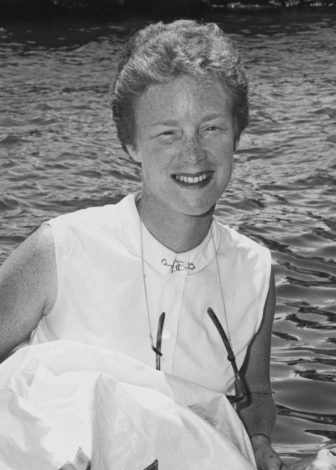 She was born in Brooklyn, New York in 1932, and her family moved to Darien two years later. After attending Hindley School and the Thomas School in Rowayton she earned a teaching degree at the National College of Education in Chicago.

Upon graduation, she taught kindergarten at the Henry Street Settlement in Manhattan’s Lower East Side and later at the Brunswick School in Greenwich. While raising her own family in Darien, she spent many years volunteering in the town’s public school libraries.

Sue was a lifelong accomplished sailor. She took to the water at a very early age, learning to sail at the Noroton Yacht Club in Darien. In her late teens, she headed the Junior Sailing Program at the Riverside Yacht Club for several years.

Representing Noroton as skipper, she won the 1962 Women’s National Sailing Championship (Adams Trophy), along with her sister Sandy and Carolyn McCurdy Wilson. Also that year, she was awarded the Martini and Rossi Trophy (today’s Rolex Award) as the country’s top woman sailor.

After retiring her beloved Lightning “Spitfire” in the late ’60s, she went on to competitively race a Tempest, a J24 and a Sonar with husband David as her loyal and unflappable crew.

Throughout her life, Sue loved to inspire and mentor young sailors, always sharing her knowledge, offering nudges of encouragement or giving words of praise at every opportunity.

She cherished cruising the New England coast and spending time on Block Island with her family. She was a passionate, knowledgeable gardener who took great pride in the landscape she created at the home where she lived for the last sixty two years.

She was predeceased by her parents, Oscar O. and Marian M. Widmann of Darien; her brother, Anthony Widmann, and a son, Timothy Biddle Sinclair. She is survived by her husband, David; son, Craig; daughter, Margot; son-in-law, Scott Mannka; grandchildren, Peter, Jason, Chris Mannka; and Lindy Sinclair, as well as her sister Sandy Falconer Austin.

Sue will be greatly missed by her husband, children, grandchildren, her amazing extended family and many wonderful friends and neighbors.

A gathering to celebrate her life will be held at a later date. If so inclined, her family asks that you consider making a donation in her memory to the Block Island Conservancy, P.O. Box 84, 234 Weldon’s Way, Block Island, RI 02807.