A running track around the perimeter of Darien High School Campus. A place for vehicles to turn around near the concession stand. Two more tennis courts. Forty-one more parking spaces. Permanent night lights for the stadium field.

Those are most of the major elements of a master plan for using land on the Darien High School campus, as presented to the Board of Education last week by Superintendent Dan Brenner. The Darien Athletic Foundation (DAF) intends to raise money and pay for all or most of the changes.

Board of Education members said they welcomed the plan, elements of which will likely be controversial, Brenner said.

“There’ll probably be a few more people in the audience next week, which is good, because I think that kind of input is critical,” he said. Approving the plan, or elements of it, will be up to the Board of Education, and then the Planning & Zoning Commission.

The plan, as presented by Brenner, consists of a set of projects around the campus that the school district would schedule. Financing for some of the projects is ready now, and for others, the foundation expects to raise funding later.

The track around the perimeter of the campus, for instance, would take 12 months to complete because it needs to be done by hand, but financing for it has been pledged by donors already, Brenner said.

The plan is meant to maintain a “first class” campus for the high school and make it safer for people to walk and drive in — as well as making it easier to find parking.

Brenner said that as a “fresh set of eyes” he worked with Athletic Director Chris Manfredonia and the Darien Athletic Foundation on revising the master plan, which he expected the public to suggest revisions, along with further possible revisions from the Board of Education. Town land use boards may then revise it further as conditions for their approving the work.

Brenner suggested that the master plan be brought up for further discussion and public comment at the next Board of Education meeting.

Board of Education Chairperson Michael Harman said the master plan is especially important because high school enrollment is expected to rise further.

“The success of the district is causing an enrollment increase, which is putting a lot of stress on our facilities, and we have such a high participation [rate] and use of sports,” Harman said. “We also have limited space. […] Our facilities are used extensively. How you best manage that — I think that’s what we’ve been looking for from that master plan.”

Here’s a summary description of each element of the plan, as Brenner described it to the Board of Education on Wednesday, March 9 (you can see a video of his presentation at the bottom of this article; unless otherwise noted, the information is from Brenner’s presentation):

At the east end of the campus, the area of the parking lot near the concession stand gets bottlenecked with cars trying to turn around to get back out and students walking through. 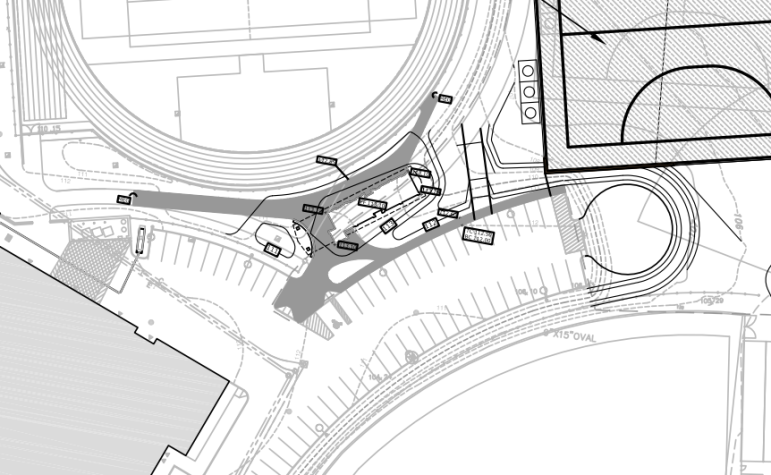 The proposed traffic circle (or “turnaround”) can be seen on the right side. The concession stand is in the middle, part of the stadium field in the upper lefthand corner, and a bit of the baseball field in the lower righthand corner. The edge of the school Auditorium is at the far left.

“It’s a bad mix,” Brenner said. “It’s a mix of cars and kids moving around in ways that are begging for something to happen.

With a traffic circle at the far east end, cars won’t have to back up to get out of the lot. “From a traffic perspective, that will solve a lot of the problems,” he said. “Is it perfect? The answer is ‘No.’ Is it way better? The answer is, ‘We believe so.'”

The Board of Education last year approved a plan to make improvements to the fields located the east of the stadium football field, but Brenner is proposing to change that plan. 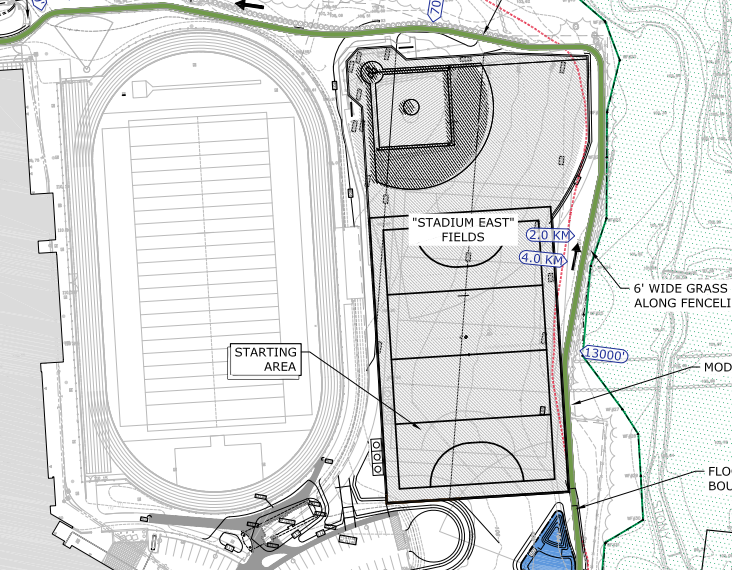 To the east of the stadium field, this baseball field and field for soccer and other games would overlap less in the revised master plan.

Instead of having the baseball infield overlapping the field for soccer, lacrosse and field hockey, the second field would be located further south, removing the infield overlap.

In the northwest corner of the campus, Darien High School has several tennis courts. Brenner’s proposal would add two more right next to them. 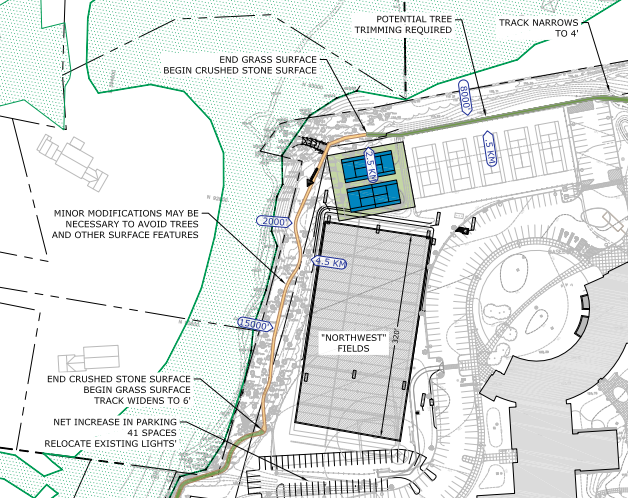 The northwest corner of the campus. Two more tennis courts just north of the softball field, which is just north of where 41 new parking spaces would be added.

“Those two tennis courts would allow for one full match to be played at the same time,” he said.

“Right now, because you have six courts and not eight, what happens is, they have to stagger [playing times] and by stagger, what are you doing? You’re pushing out, you’re extending the time for the kids to play and, frankly, if we can get kids in and out and play their matches and go home, we’re shortening their day.

“It’s a much healthier way — we’re not sending them home later in the night to do their homework.”

The district had considered installing artificial turf on a softball field just south of the tennis courts at the western end of the campus, but Brenner said it would be better to keep that field as grass and install the turf on the lower field at Middlesex Middle School.

“There was a sense [in conversations about the turf idea] that by putting yet another turf field here we continue to attract more folks to come onto the campus because it’s a first-class playing surface,” Brenner said. More visitors to the campus means more overcrowding in the parking lots, he said.

“This is an ongoing problem at the high school,” he said. “You can’t find someone that will not tell you that there’s a parking problem.”

Installing artificial turf on a middle school field will probably be the last project to be started, Brenner said.

Just to the south of the softball field at the western end of the campus, Brenner wants to construct a parking area with 41 more spaces.

A total of 41 parking spaces would be added just south of what the map calls “Northwest Fields” at the western end of the campus. The end of Nutmeg Lane is shown in the lower lefthand corner, the high school building on the right and the edge of the Upper Oval Field at the bottom.

Parents coming to the campus for Council of Darien School Parents events or PTO events have found it difficult to find parking during the school day, and sometimes they park on grass or at other spots where they aren’t supposed to, Brenner said.

The added parking “allows us to be able to essentially organize the campus in a way that is (a) safer and (b) makes more sense.”

Running track around the campus

All the way around the outer edge of the school grounds, the master plan proposes a running track that would be a mix of grass and gravel surfaces and would at some points cross the roadways leading in and out of the campus.

Follow the course of the proposed track on these series of maps: 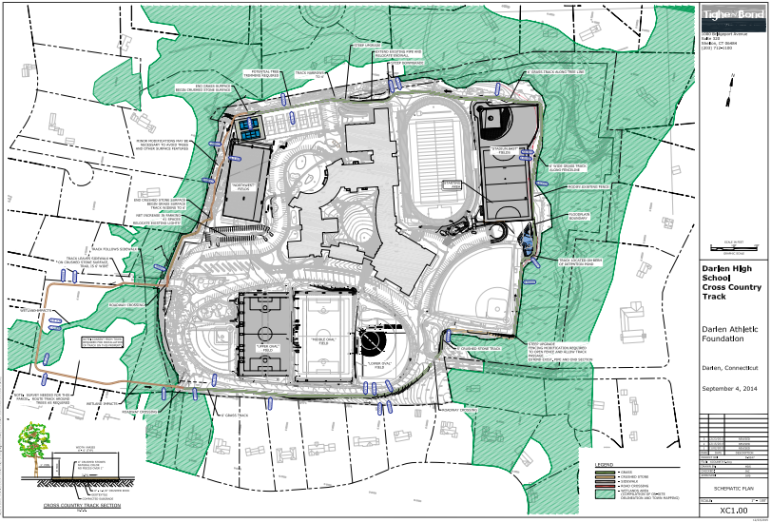 The following maps are parts of this overall master plan map created by Tighe and Bond for the Darien Athletic Foundation. 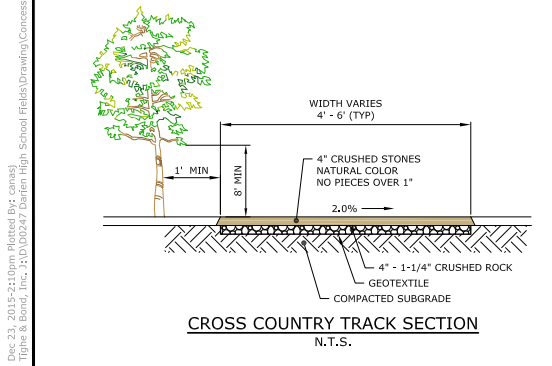 A cross section of the track from the master plan map

This "Legend" shows how the colors correspond to the types of track surface on the map.

A closer look at the track, starting in the northwest (upper left-hand) corner of the map.

Proceeding counter-clockwise, the track at the southwest part of the school grounds, going around the "Diller property"

The southern part of the track, south of the oval fields

Northeast corner of the campus 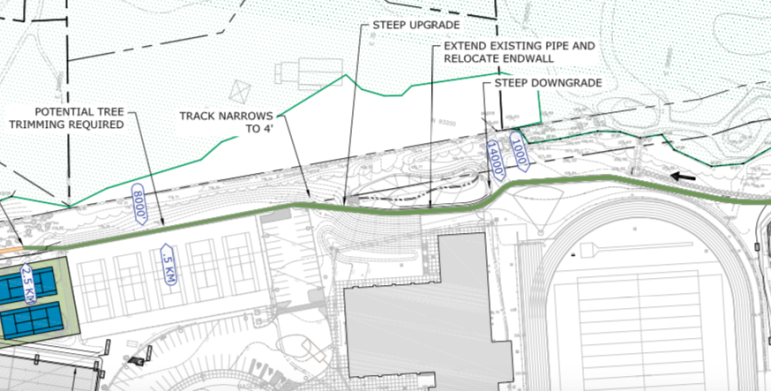 The track on the northern side of the campus.

The track, which already has donors willing to pay for it, would need to be constructed by hand “because of the sensitivity of the environment and how you have to clear [it], it’s not going to be done by big machinery.”

“What this does is, it allows us to have what would probably be two cross-country [track] events a year that would be on-site,” Brenner said. “It allows [most of] our kids to workout and train on site […] as opposed to going on the roads, which we see en masse when the weather is right. It presents us with yet another first-class facility, and it touches another whole group of kids.”

This element of the master plan is described in this Darienite.com article:

The projects would probably be built in this order, Brenner said:

A school facilities study is expected to be done by consultants through May or June of this year, and the consultants will look at parking and traffic at the high school campus, which could potentially result in changes to the master plan, he said.

You can watch Brenner’s March 9 presentation to the Board of Education and its discussion on this video (starting at 1 hour and 50 minutes and extending for the next 40 minutes):