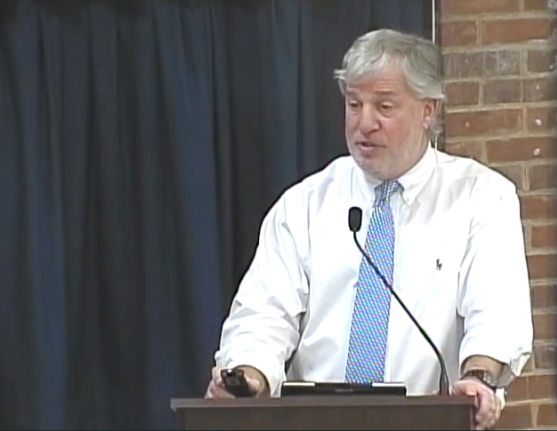 Schools Superintendent Dan Brenner delivered his first budget presentation to the Board of Education on Tuesday.

Darien Public Schools spending would go up 3.85 percent, to $94.2 million in the 2016-2017 fiscal year under the budget proposal Superintendent Dan Brenner put forward to the Board of Education this week. 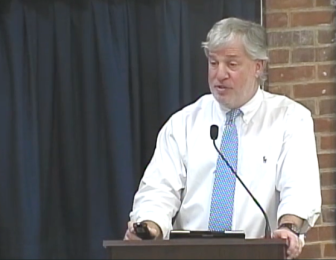 Schools Superintendent Dan Brenner delivered his first budget presentation to the Board of Education on Tuesday.

Asked what parts of the new initiatives he’s proposing are particularly important, Brenner said: “Two areas that we focused on were both professional development [that is, ongoing teacher training] as well as on the technology, both of which we think will make significant differences in kids’ lives inside the classroom.”

Brenner pointed out that 64 percent of the budget goes to pay employee salaries, another 13 percent goes for benefits (for a total of 77 percent), both of which are largely already determined by pre-existing union contracts and other contracts. 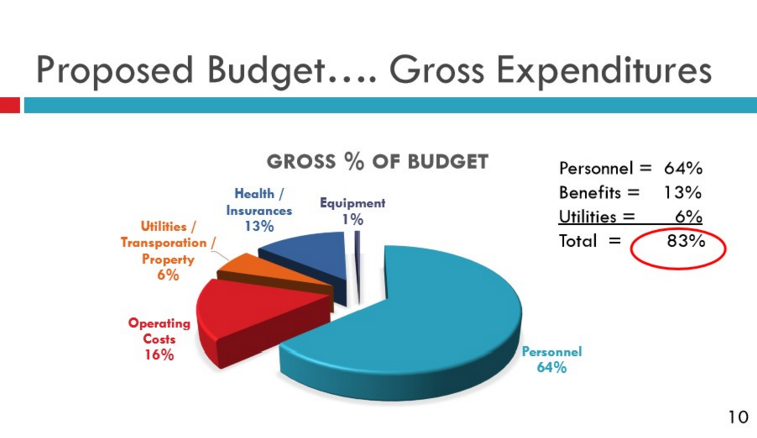 Add to that the 6 percent of the budget that pays for utilities and transportation (which are difficult to change and even more difficult in the short term), and the vast majority of a school district budget — in this case, 83 percent — is largely set, unless officials want to cut services.

The district has the equivalent of almost 758 full-time employees (when the hours of part-time employees are included), a number which would go down by a bit more than three employees in the next fiscal year, according to the budget proposal.

You can download the full budget proposal in PDF form here, with explanations of some spending items and a breakdown of costs, including what individual schools are spending, and capital budget requests. See below for a video of the budget presentation, which begins with a couple of minutes of blank screen (just wait for the meeting to start) and runs about 39 minutes. You can skip ahead when it gets boring.

Districtwide, contractual salaries (under union contracts and other, individual contracts) “are one of the largest cost drivers” increasing the budget, Brenner said. Salaries districtwide would go up 2.52 percent, or $1.5 million in the proposed budget. (Union contracts for maintenance, groundkeepers and cafeteria employees all expire June 30 of this year, and the teacher’s union contract expires June 30, 2017.)

Per pupil spending in the proposed budget would be $18,548, Brenner said. Since 2007, he pointed out, Darien’s school spending has been lower than the other districts in the District Reference Group A (or “DRG A”) —  a set of nine school districts (in similar communities) that the state Education Department uses for statistical comparisons of  performance and spending. 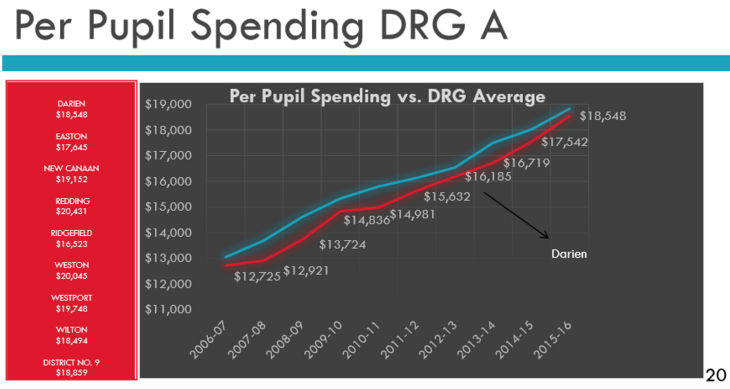 New initiatives in technology spending include establishing “copy centers” in the schools, wider use of smartboards and the “1:1 initiative” (see below) in elementary schools and Middlesex Middle School. Money would also be spent on “upgrades to our hardware districtwide: routers, access points & switches,” according to a slide in Brenner’s budget presentation.

“For 2016-17 funding is designated for student devices — Chromebooks — at the elementary and middle school level. The budget for computers would be used to support a 1:1 computing environment for all students in Grades 5 to 7.

“Students in these grades would be assigned a Chromebook to be used in school and at home. These devices would be actively managed by the Darien Public Schools. Students in Grade 4 also would have individually-assigned Chromebooks, but they would be kept in the classroom.

The technology budget also calls for $604,344 in spending on software maintenance, including buying new software and enhancements to current software. A total of $223,768 is requested for copiers. The district is planning to have “copy centers” in schools, which are expected to save money.

Another $150,000 is proposed for hiring contracted workers to help implement the 1:1 initiative and for “wireless infrastructure” to support the same program.

Estimated districtwide enrollment, which can drive up costs, is expected to rise by only 10 students, to 4,857 by Oct. 1 of this year, although an increase of 19 students is expected for Darien High School (to 1,377) by that date. By Oct. 1, 2018, the high school’s enrollment is expected to be 1,433 (an increase of 75 students over last year) and then remain roughly flat for the next two years. 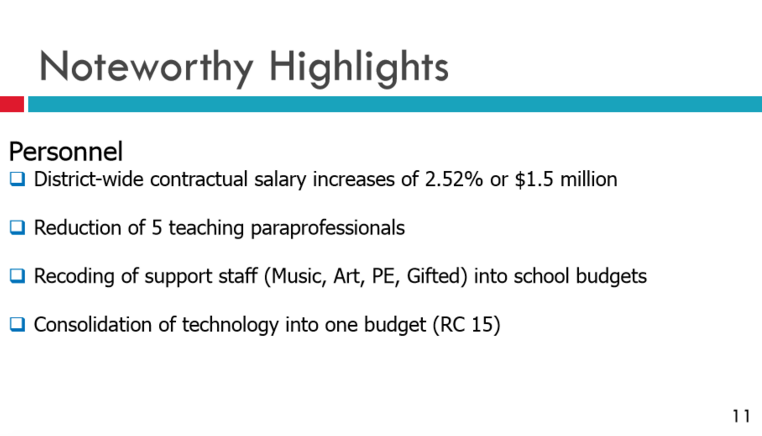 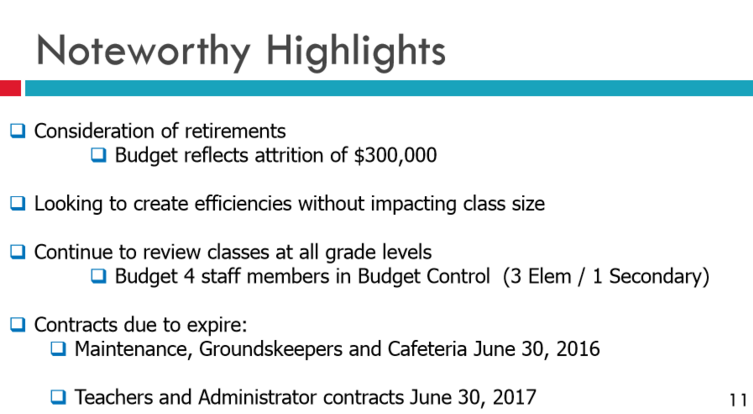 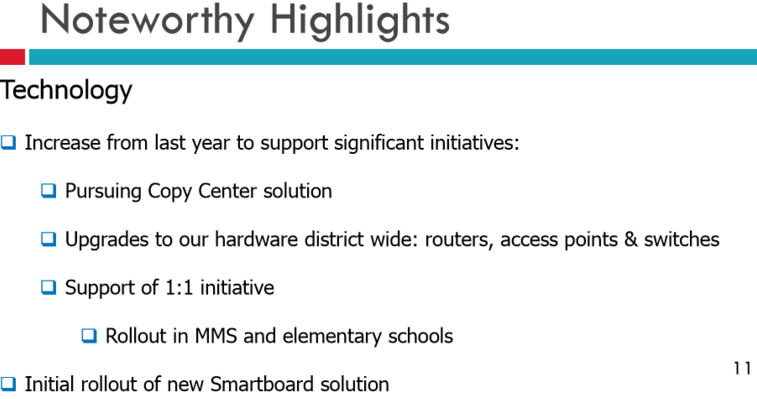 Reorganization of the budget document

This is Brenner’s first school budget proposal since he was hired as superintendent last year, and it includes some changes in the way the document is organized.

Michael Feeney, the district’s director of finance and operations, described some of the changes, including reorganizing “responsibility centers” (also referred to in the budget as “RC” and numbered) so that not only are individual schools separated out in order to show how their budgets have changed, but spending on technology is given its own “RC” chapter.

On the other hand, RCs for arts, music, gifted students and physical education spending have been eliminated and spending on those programs is now part of each school’s budget.