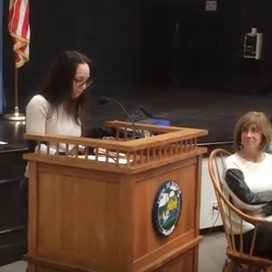 At Tuesday evening’s Board of Education public hearing on the proposed school district budget, Sivan Hong gave a brief, particularly moving account about how important the Early Learning Program was to her autistic child, and she urged the board to keep it well funded.

Here’s part of what she said in words, and, on video, nearly her entire statement:

“ELP has played a critical role in shifting the trajectory of my child’s life,” said the woman, whose name Darienite.com could not find out before publishing this article (although we don’t think you need to know her name).

“And if my emotional thanks is not enough to convince you to strengthen your support of ELP, then think about this: Without ELP, Benjamin would have likely had to go to a private school for children with autism, costing the district far more over the next 12 years than the two years that he’s had in ELP, and it would have resulted in an even greater expense on society to have to support him long-term.

“Early intervention works. […] He will grow up to be a productive member of society, thanks to ELP. I’m forever grateful.”

Editor’s note: At 10:05 a.m., Wednesday, we added Sivan Hong’s name — we hadn’t been able to get her last name Tuesday night.

Sivan Hong’s statement begins at 51 minutes on this recording of the meeting:

Board of Education – Budget Public Hearing 2-2-16 from Darien TV79 on Vimeo.