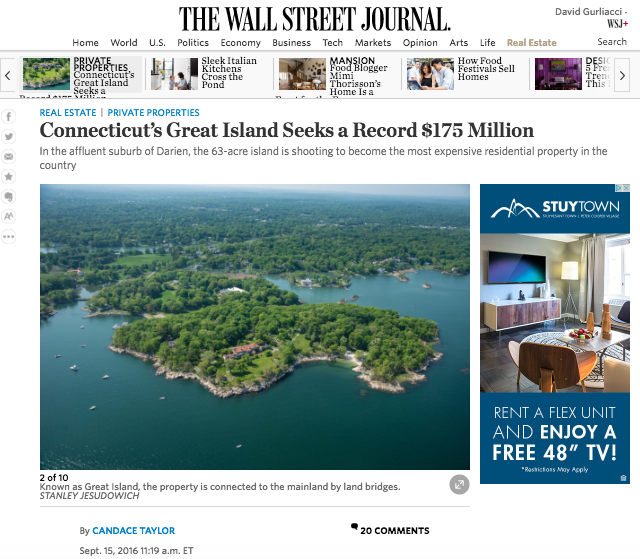 This is what the Wall Street Journal article about the Great Island estate going on the market looks like on the newspaper's website.

Darien town officials have considered whether to make a bid for the 62.5-acre Ziegler estate, up for sale for the first time in over a century — but First Selectman Jayme Stevenson said the current $175 million asking price is “staggering.”

Stevenson said town financial officials considered how much a 20-year bond would cost the taxpayers if Darien paid what the Ziegler family and its real estate agent, David Ogilvy of Greenwich, are asking. It works out to about $13 million a year. 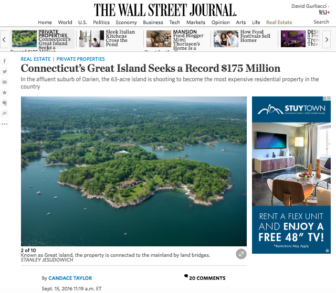 Here’s what the Wall Street Journal article about the Great Island estate going on the market looked like on the newspaper’s website last Thursday.

“The purchase price of $175 million is a staggering amount of money,” Stevenson said in an interview Monday night. “I’m not sure we’re in a position at this moment to negotiate for something that expensive.”

But she didn’t close the door completely.

“The town is always interested in entering into the purchase of open space,” Stevenson said. She added that she and other town officials are open to discussing a purchase of the Ziegler land, and she’s heard from quite a few people in town urging her to try to buy it.

She also said that the town has the financial capacity to buy the land, although she indicated it would be a strain, and the town has other important projects that require bonding, including the Department of Public Works garage project and possible school additions now being contemplated by the Board of Education.

The Board of Finance has set the current town bonding limit at $100 million, Stevenson said. Considering those other projects and the strain on the town’s finances that a huge land purchase would entail, she said, “We have to be very prudent.”

The costs won’t end with the purchase either, she said. There would be ongoing operating costs, no matter what the town did with the land.

On Thursday, an article in the Wall Street Journal broke the news that the enormous estate was up for sale, with an asking price that would make it the biggest purchase of a residence in the United States, if someone paid the initial $175 million asking price.

The 62.47 acre tract off of the northern end of Long Neck Point Road includes not only a mansion, but a 20-stall, granite horse stable, extensive grounds for horses, and a long coastline on a rocky shore.

Stevenson indicated that no serious discussions about the town buying the property have occurred: Town officials haven’t talked to Ziegler family members who own the property, and Stevenson said she’s never visited it herself, just seen it from offshore.

“The Darien Land Trust and I have made outreach to the family, so they’re well aware of the town’s interest,” she said. “We would have welcomed the opportunity to talk to the family.”

The Darien Land Trust often negotiates agreements in which property owners agree to set aside land not to be developed in perpetuity — and get tax write-offs in return.

The land trust is sometimes able to buy land, sometimes in partnership with the town. Stevenson did not hint that anything of the sort was being contemplated for the Ziegler property.

Any purchase of the Ziegler property would need widespread town support, with approval from not only the Board of Selectmen, but the Board of Finance and the Representative Town Meeting.

“We’d have to look at the public benefit […] to an acquisition of that kind,” Stevenson said. “Your mind can really wonder about the incredible possibilities of a piece of land like that — even as open space or walking trails.”