The state Labor Department has lifted a previous ruling that prevented 17-year-old members of Darien EMS-Post 53 from driving the agency’s ambulances, and that will make it much easier for teenagers in the group, the newly elected president of the high school organization said. 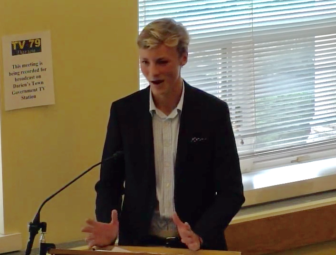 George Kroll, president of Darien EMS-Post 53, spoke Tuesday at the quarterly Darien town department heads meeting with the Board of Selectmen.

It wasn’t just frustrating for the 17-year-olds in the organization — it was very difficult on the 18-year-olds, said George Kroll, a Darien High School senior and now president of the group.

Joe Larcheveque, the executive director of the group, normally delivers the organization’s quarterly report to the Board of Selectmen, but he couldn’t make it to the meeting, so Kroll stepped in.

Darien EMS-Post 53 was relying on 18-year-olds to do much of the driving and therefore to be on call a lot of the time, he said.

“That meant right when you turn 18 at Post, you were on duty — you were pretty much sacrificing your social life and everything you do to Post in order to keep Post running,” Kroll said Tuesday at the town Board of Selectmen’s quarterly meeting for town department heads.

“We were very worried about keeping afloat as we can’t force our 18-year-olds to continuously drive 500, 600 hours a month,” he said. “So we had to resort to Stamford EMS drivers, adult drivers, and it kind of, ah, like clouded the view that Post had where it’s kid-run and we are the ones who are [running] the ambulance.” 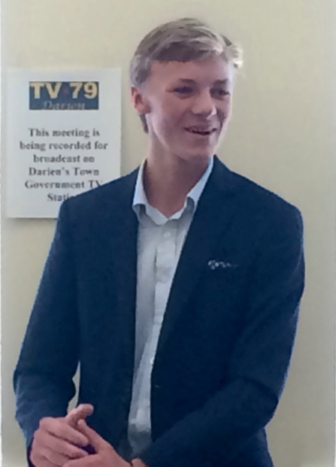 George Kroll at the Board of Selectmen meeting on Tuesday.

The initial ruling came a few years ago, Kroll said, and was only recently resolved, with the state reversing the earlier ruling.

“We are able to drive the ambulance after six months of having our permanent license, so the earliest you can become a driver is around 17 years old,” he said. “So now we’re getting all of our 17-year-olds who are fully equipped starting to drive. We’re all starting driver training now […] so we’re in the ambulance a lot more.”

First Selectman Jayme Stevenson noted that the ruling change came after some of Darien’s elected representatives in the Legislature pressed for it: “We have to give a shout-out to our state reps [legislators] for helping with that. That was a Department of Labor ruling that now allows 17 year olds to drive the ambulance.”

“We’re all very, very happy” with the change, Kroll said. “It’s exciting, because now we’re finally saying farewell to the adults” — at this point the audience (of adults) burst out laughing — “and now we are taking over again, which is great. They’re still there to assist us in anything we need.”

Stevenson asked Kroll: “How is being president going so far?

“Our active membership is a bit low,” Kroll said a little later. “It’s about 20 to 30 short.” Incoming 9th graders are easing the shortage, he said. 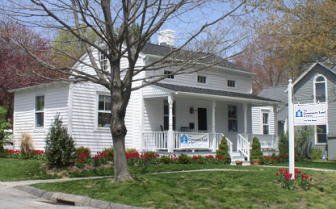 The 701 Post Road building, just to the east of the construction site where Old Town Hall Homes is being replaced. (The photo is from the website of Community Fund of Darien, which used to be headquartered there.)

At another point in the same meeting, Stevenson asked Head Building Official Peter Solheim how soon Stamford EMS paramedics could go back to their former Darien base on the Post Road next to the site of Old Town Hall Homes, now under reconstruction.

“Right now they’re dislocated and soon to be relocated somewhere else,” Stevenson said. At still another point in the meeting, Stevenson said she would soon talk with Darien Fire Department officials, in part about whether the paramedics could be based at that department’s headquarters downtown.

Solheim said: “I think once the foundation site work is done and the big equipment is out of the way, then there’s no reason why that area couldn’t be fenced off and separated from the construction site, where it would be usable again.”

At another point, Solheim said the construction supervisor at the Old Town Hall Homes site told him that the contractor would be looking for a building permit by mid-August, after the foundation was completed and approved by town zoning officials. As of Tuesday, he said, the foundation work was 30 percent complete.